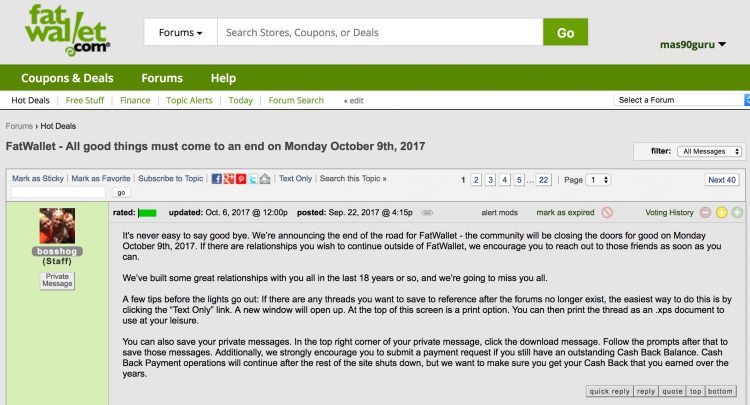 There was no reason given for the closingalthough in the nearly 17 years of the site’s existence many retailers have gotten wiser to online marketing and now offer their own affiliate programs, which was an area FatWallet once used to generate funds before discontinuing their affiliate program in favor of eBates.

Several popular blogs have also started to spotlight deals and offer curated lists of deals. FatWallet was one of the first but ultimately may not have had a strong enough revenue stream to keep the lights on.

Over the years, I’ve spotted many deals on FatWallet. During the Dot-com bust of early 2000 the site was a treasure trove of deals from companies who were selling things like cartons of copy paper well below cost and were willing to deliver it to your house without charge.

FatWallet was a testament to the early power of community. Many of the deals appearing on the site were generated from members who logged in and posted information in their free time. There was a group of moderators who maintained strict order and kept the flow of information largely spam and advertising free.

FatWallet – All good things must come to an end on Monday October 9th, 2017