For all my grumbling about switching from Android to iOS, it’s really not so bad. The one thing I really missed was Google Assistant, but the JBL Link 20 is doing an excellent job of filling that gap. It’s a portable Bluetooth and WiFi speaker with Google Assistant built-in, so I can take my “Hey, Google” obsession all over the house! 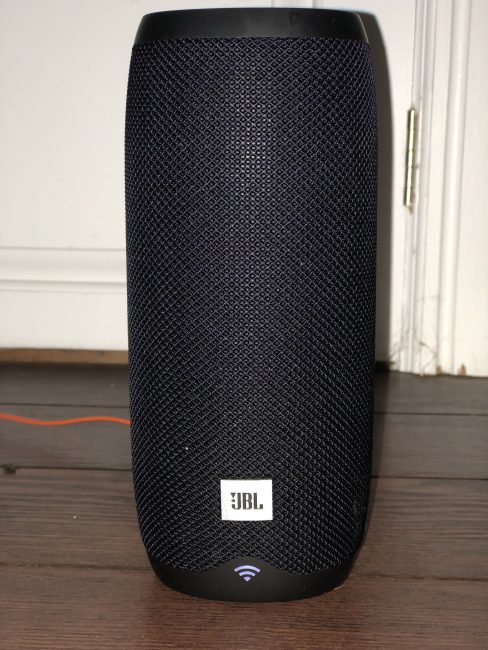 The JBL Link 20 is a very capable speaker, but in looks, it is extremely average. It’s a black cylinder, with a few controls on the top, power and mute buttons on one side, and with lights that indicate WiFi strength and that the speaker is listening when you say “Hey, Google”. Calling it average isn’t a criticism, though — it’s the sort of speaker that you could bring into any room and it wouldn’t stand out or call attention to itself, it would just quietly do its job. Oddly, the charger that came with it is bright orange, so there is a pop of color there at least! 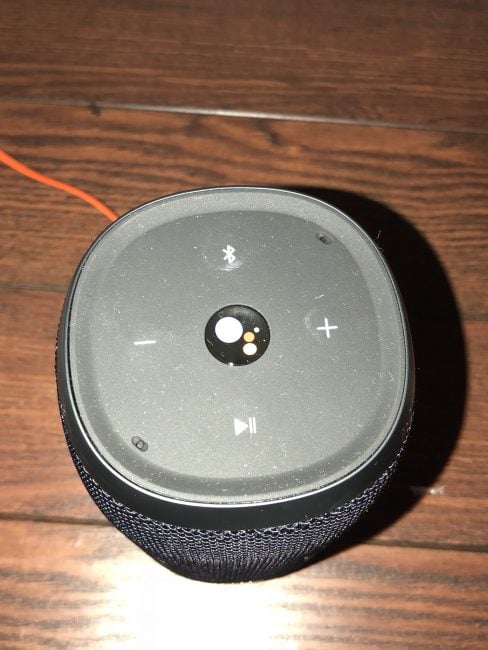 It seems best to break this into two parts: the Link 20 as a Bluetooth speaker and the Link 20 as a Google Assistant device. As a speaker, it sounds pretty great. Volume is excellent, and songs with strong beats and bass came through nicely. I have found that it fills an average sized room with sound nicely, so it’s perfect for background music while working in the kitchen or as a speaker while you’re out camping or hanging out in your backyard. The Link 20 is also rated IPX7, meaning it could be submerged in clear water for up to 30 minutes if you have the charging port closed. In practice, this means while you probably shouldn’t take it swimming with you, it’s fine to be used outdoors, and if it gets splashed or rained on you don’t need to panic. JBL rates the battery as good for 10 hours, and while I haven’t run it for that long, I also have used it on and off the charger without any issues or low battery warnings.

Of course, music is only half of the tricks the JBL Link 20 can offer. By pairing it with the Google Home app, you can ask Google to handle all sorts of things for you. All it takes is a “Hey, Google” followed by what you need, and Google will chime in with the answers. I get a huge kick out of asking it for the weather and top headlines every morning because it is really nice to get a quick update on the world while I’m getting ready for my day. It’s also very useful if you have an inquisitive 4-year-old. Recently, my son has become obsessed with the planets, and Google has been very patient about answering “Hey, Google, how big is Mercury/Venus/Earth/Mars, etc” over and over again. Note that Google was not able to handle the question that my son really wanted to be answered, which was “How big would a soap-bubble have to be to cover the Earth?” [I’m sure there’s a way to figure it out using geometry, but I’m trying not to encourage this-between asking about covering the earth in a soap-bubble and asking for a pet cheetah, I’m mildly concerned he’s a budding Bond villain.]