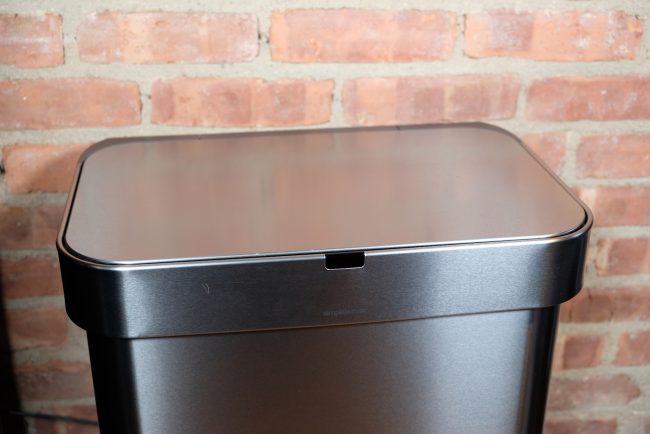 It turns out that hands-free garbage cans are kind of life-changing. To that effect, I’ve been using simplehuman’s first gen sensor can for nearly 7 years. Of everything in my kitchen, it’s my simple human garbage can that impresses people the most. Let’s just say that once you get used to having an automated garbage can, you can’t go back.

Fast forward to 2018 and simplehuman has come out with the sensor can with voice control. This 58-liter not only reacts to the wave of you hand, but it also reacts to your voice.

Just say “open can” and the lid opens. This works right out of the box. No Alexa, no Google Assistant, no smart home eco-system required – just say “open can”, and it works flawlessly nearly every single time. It’s super responsive.

Opening the lid with the wave of your hand is just as flawless. In comparison to the older model I’ve been using, the newer simplehuman Sensor Can doesn’t slam down quite as hard. Instead, it glides up smoothly and softly glides down. Operating at 52 dB, Simplehuman also describes the can as whisper quite, and it is indeed pretty quiet, but it does make a little bit of a whirring noise when the lid opens. 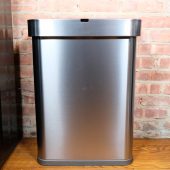 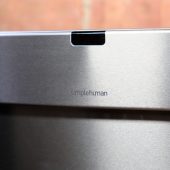 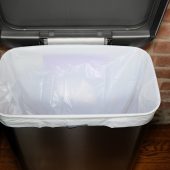 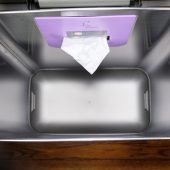 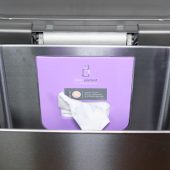 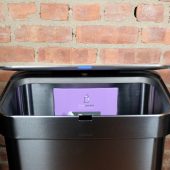 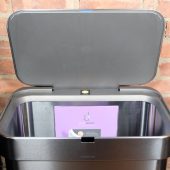 The design of the Can is simple and minimalist. The Can is available in a choice of 5 finishes which includes “brushed”, and is likely the most popular finish since it matches stainless steel. The Can also uses a nano-silver clear coat that is supposed to protect the Can from fingerprints and germs. As for the fingerprints, so far our unit has been struggling to keep fingerprints off, but how often would someone actually be touching it to leave behind a fingerprint anyway?

The Can comes with a liner pocket on the inside which is used to store and dispense liners right from within the Can. This compartment is extremely convenient and very welcome – there’s no more roaming around the kitchen looking for a new liner. Simplehuman throws in a trial 10 pack of their own branded liners in the box, but the Can will work with most standard liners.

The Can can be powered by 6 AA batteries or with the included AC adapter.

It’s clear that simplehuman has learned a lot from their previous Sensor Can models. The result is that the Sensor Can with Voice Control is possibly the most advanced and refined garbage can on the planet. To that effect, voice commands are super responsive, and so is its motion sensor. There’s no noticeable delay with either method. The Can’s lid also opens and closes incredibly smoothly and pretty darn quietly.

Laugh at me all you want, but I’m kind of in love with my garbage can. Can you live without simplehuman’s Sensor Can with Voice Control? Yes. But once you have one, you won’t understand how you ever lived without it.

Simplehuman’s Sensor Can with Voice Control retails for $200. A “recycler” model with two separated compartments retails for $250.

What I Like: Voice control works right out of the box – no Alexa or smart home assistant required, lid closes/opens gently and smoothly, available in several finishes, motion sensor is very responsive, houses a convenient liner compartment, comes with an AC adapter and a generous 5 year warranty, operates quietly, great for those with OCD

What Needs Improvement: The lid is a fingerprint magnet – but there’s no reason to really have to touch it

Update 7/16/18: SimpleHuman has released an app for Android and iOS that lets you conveniently order new liners from your phone.