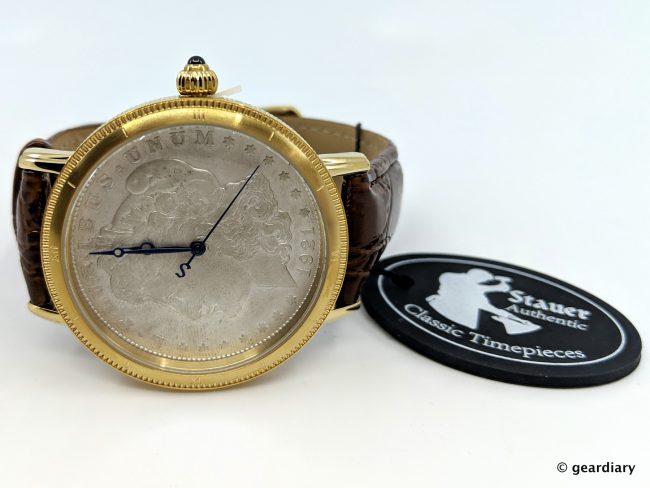 I’m no numismatist, but I love the idea of wearing jewelry that features coins because they are tiny pieces of art that have both a historical significance as well as an intrinsic and extrinsic value. That’s why the Stauer Morgan Silver Dollar Mens Watch so naturally caught my eye.

One of the most widely desired of all U.S. coins — the Morgan Silver Dollar has become a legend. It’s easy to see why—the largest silver currency ever to circulate in the United States, Morgan dollars are 90% silver. Now, the master watchmakers at Stauer have combined this beloved coin with a legendary Swiss movement to create a remarkable timepiece. 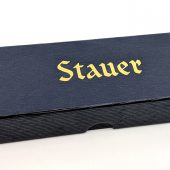 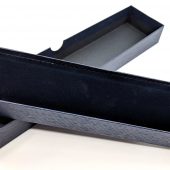 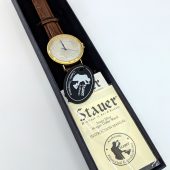 The Stauer Morgan Silver Dollar Mens Watch isn’t a smartwatch; it doesn’t connect to your smartphone or give you notifications when you get a text, it doesn’t track your steps or heart rate, and it doesn’t even tell you the date. It’s just a beautiful and accurate Swiss Quartz movement watch that happens to feature a nearly 100-year-old silver coin as its face, but it is so beautiful and uncommon that it stands out among all the other watches you’ll see people wearing.

The Morgan Silver Dollar Watch features a genuine Morgan silver dollar as its face, set inside a coin-edged case finished in luxurious gold. Master engraver George Morgan’s radiant profile of Lady Liberty provides a striking backdrop for the blued, Breguet-style hands. Etched Roman numerals along the edge of the dial and a sapphire crown add the final elegant touches.

The Morgan dollar was a United States dollar coin minted from 1878 to 1904, and again in 1921. The Morgan dollar on the watch I received is dated 1921, and it’s 90% silver. The watch itself measures  ~45mm from edge to edge and it is 11mm thick. The 21mm band is genuine leather stamped with an alligator pattern in brown, and it is made to fit wrists from 6.75″ up to 9.5″ around. My wrist is 5.75″ around, so on the smallest notch it’s a little loose, but I like it like that. While the Morgan Dollar in the watch face itself is sterling silver, the watch case and the buckle are described as “gold fused”, which I take to mean gold-plated. 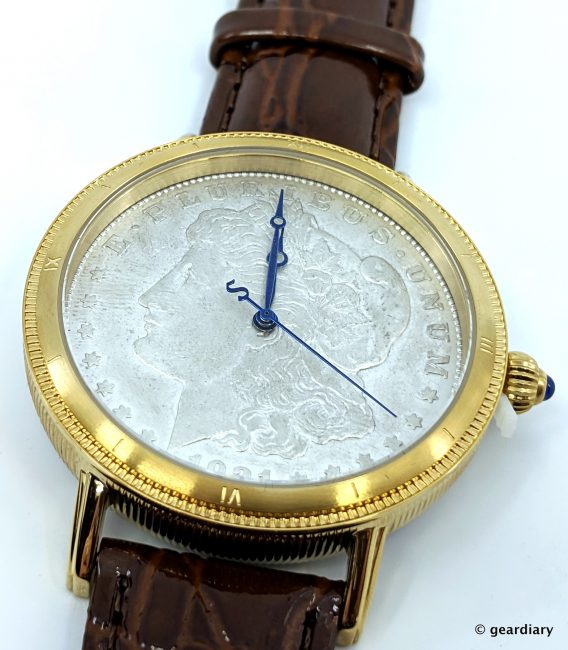 The bezel has etched Roman numerals, so it is very easy to tell exactly what time it is if you aren’t used to looking at a traditional watch face without numbers.

I love than the elongated hands are a shiny sapphire blue that matches the gem set in the watch’s crown. The only branding on the watch face is the Stauer “S” on the second hand. Setting the watch is done by pulling out the crown and placing the hands on the desired hour and minute; it’s very simple. 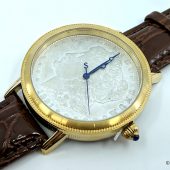 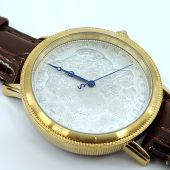 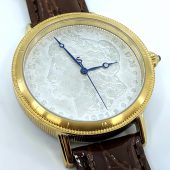 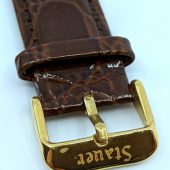 Here’s a shot of that sapphire cabochon set in the watch’s crown; it’s reminiscent of Cartier watches. 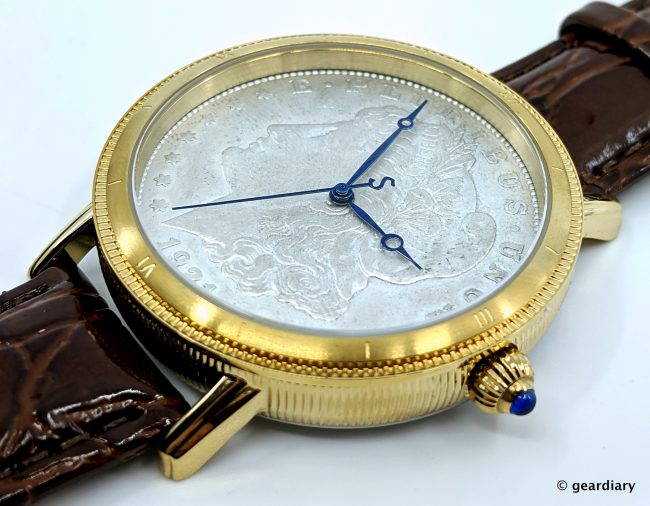 The watch has a stainless steel solid back with “Hereby certified in all detail, this United States Morgan Silver Dollar is .900 pure silver.” The watch is water-resistant to 3atm, so you don’t have to worry about washing your hands or splashing, but you shouldn’t wear it swimming. Considering it has a leather band and it’s more of a dressy watch than a sports watch, you probably wouldn’t want to wear it swimming anyway. 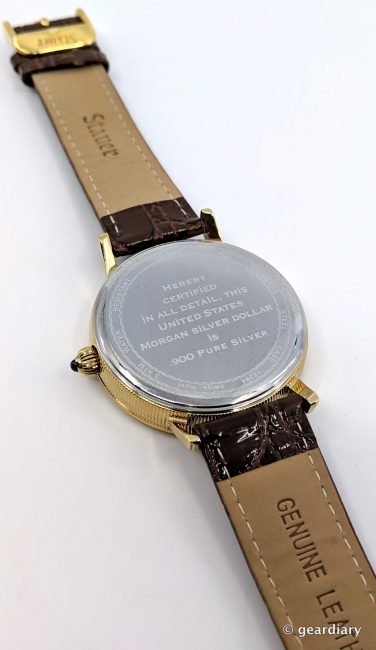 I have a relatively small wrist, but I don’t feel like the watch is too thick or too large. 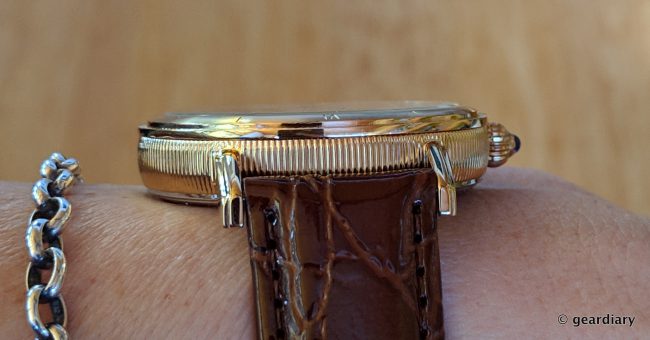 It’s really beautiful on, even though it is technically a man’s watch. I like that the watch has both gold and silver in it, so it won’t clash with any other jewelry you might already wear. 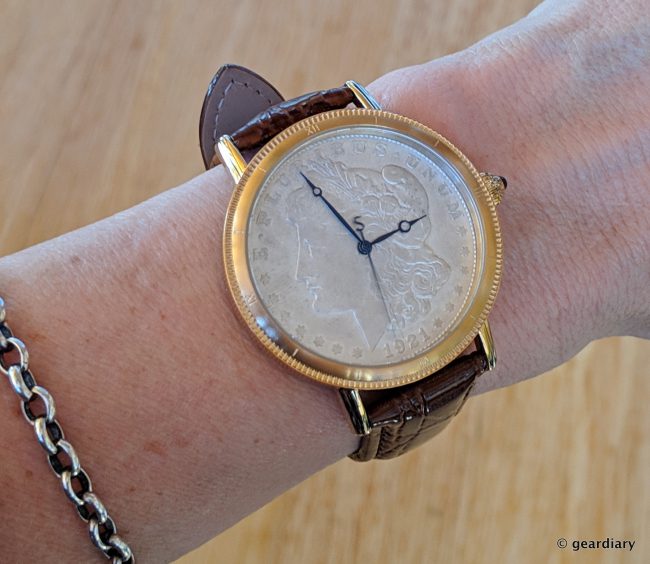 If you love wearing something a bit different from the norm, and if you can handle people asking to see your watch as it catches their eye, the Stauer Morgan Silver Dollar Mens Watch is a fantastic choice to treat someone you love (or yourself!).

The Stauer Morgan Silver Dollar Mens Watch retails for $495 (it’s $199 with code WEB2479), and it is available directly from the manufacturer.

What I Like: Large, nearly 100-year-old Morgan Silver Dollar makes up the face and focal point of the watch; The Gold accents make it perfect for those of us who mix our jewelry colors; Keeps excellent time; Roman numerals on the watch’s bezel make it easy to read the time; Looks great on a man’s or woman’s wrist; Water-resistant to 3atm

What Needs Improvement: Band is sized for men’s wrists, so if you have a smaller wrist you may need a different band