It’s been a while since we had a regular Gear Diary podcast but, when we did, we all used microphones from Blue. One of us had a Blue Yeti while two others used a Blue Snowball. All of them worked perfectly. We’ve been discussing starting up the podcast again, and, if we do, I’ll be using the Blue Yeti X. 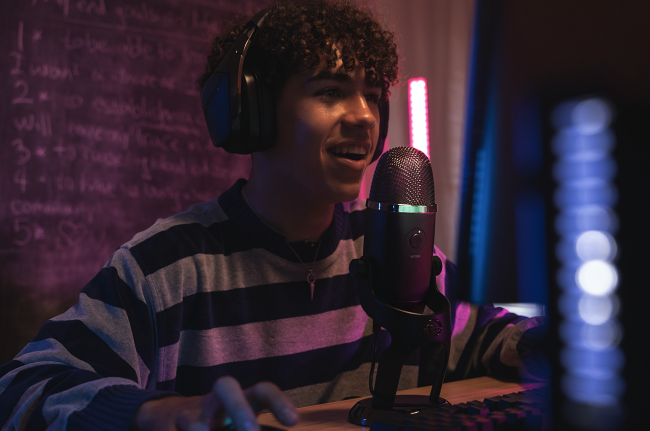 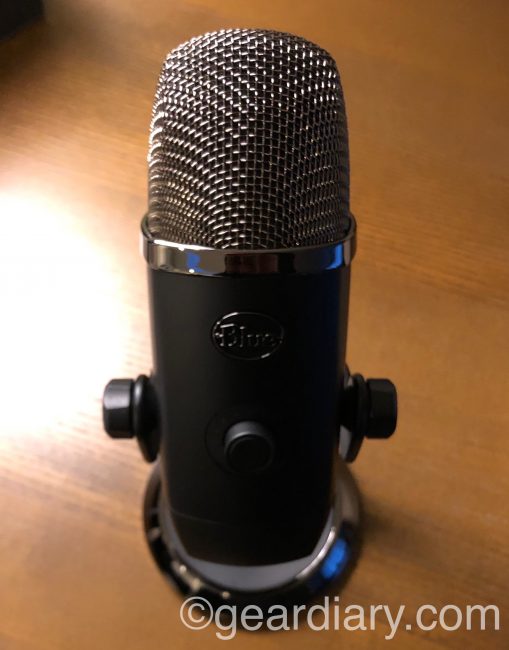 Thankfully, it’s awesomeness is more than skin deep. That’s why Blue describes it as “the Ultimate Mic for Creating and Streaming.” 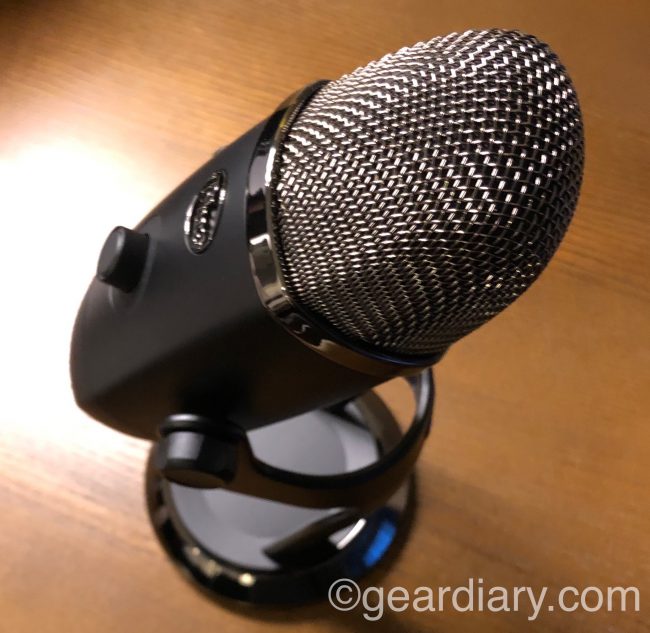 This USB microphone has a brand new four-capsule condenser array that can record clear, focused sound in four different pickup patterns. That degree of flexibility is great since, let’s face it, most creative types don’t limit themselves to just one type of content creation. Also, the Yeti X has an illuminated multi-function smart knob that lets you monitor and adjust your voice level while using it, so you get great recordings the first take.

Let’s dig into the specifics that set of this microphone apart from the company’s previous microphones, and if I’m honest, all of the other microphones I have reviewed over the years. 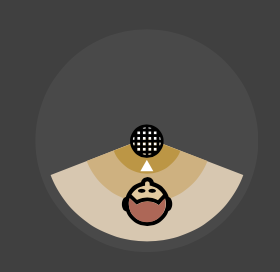 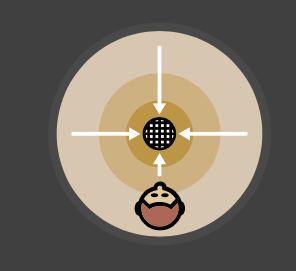 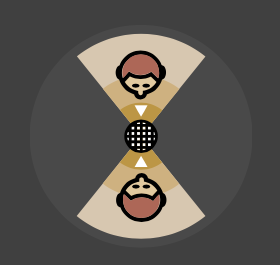 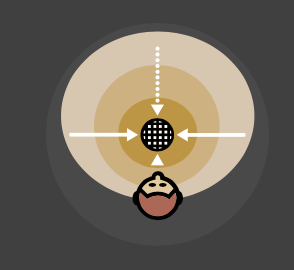 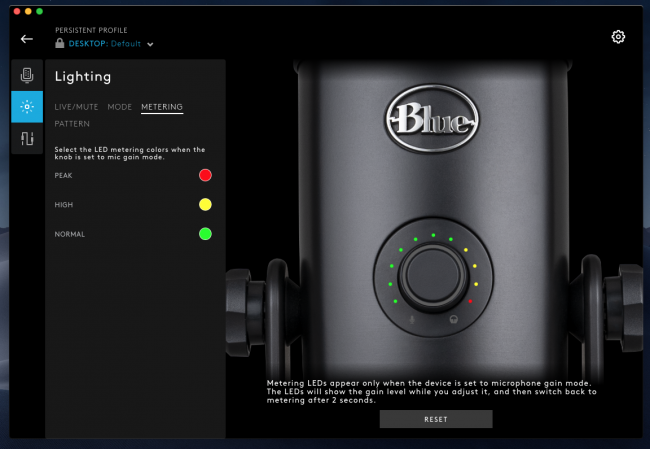 You won’t see the four capsule array since it’s built into the microphone. What you will see are the new indicator lights that sit in a pronounced position toward the front of the microphone. Consisting of 11 different LEDs, this lighted meter allows you to see your voice level and determine if it is too high or too low. More than that, by using the knob at the center of the LED metering ring, you can adjust the voice level in real-time, all the while using the LEDs to see what the proper audio level is. This is a huge deal since it means you can adjust the volume while recording so you can get it just right. That way, instead of having to go back and rerecord if the volume is too high or too low, you’ll get the recording right in a single take. This combination of controls is a game-changer for those who are live streaming content since they can see the audio levels as the environment changes and adjust accordingly. As Blue puts it, with the LED metering you can,

Visualize your voice level at a glance and fine-tune your on-stream sound with easy-access controls for mic gain, mute, headphone volume and blend for powerful, broadcast quality sound. 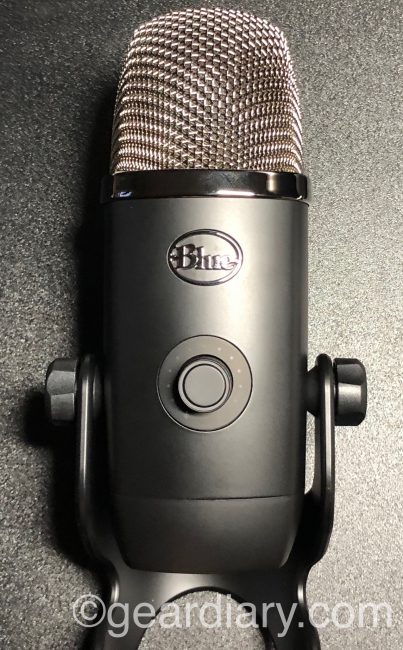 Also, while many of the previous microphones I have used had a simple volume control, the Yeti X has a “Smart Knob.” What, you might ask, makes the “smart knob” smart? Well, I’m glad you asked. With the Yeti X, a single knob can control the gain, headphones monitoring levels, and blend modes. The various control options break down this way:

There’s another aspect of the microphone that makes it stand out, but it doesn’t have anything to do with the microphone itself. It’s a piece of software that takes the Yeti X to places you can’t normally go with a plug and play USB microphone. I’ve had Yeti X for a while but held off on the review because I wanted to be able to use a final release version of the software. 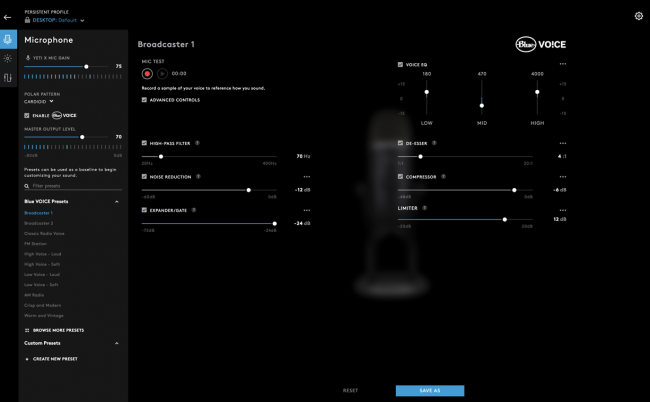 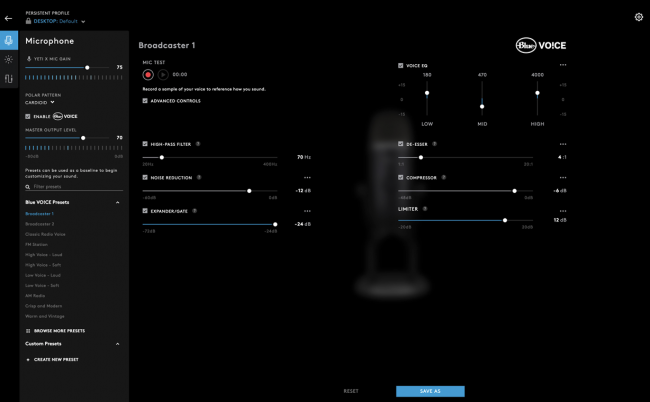 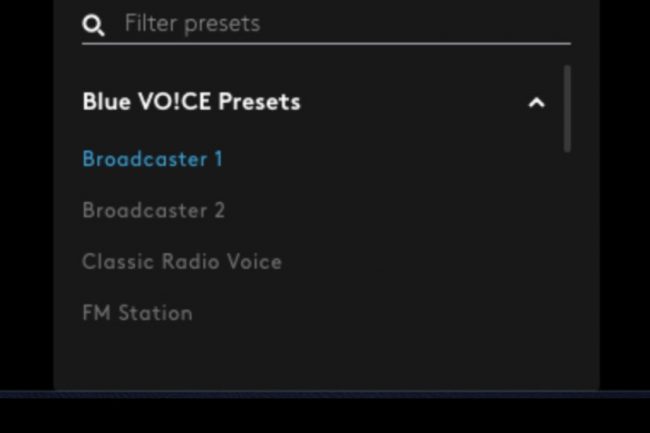 Blue VO!CE software includes seven broadcast vocal effects that work together to craft the perfect vocal sound. You can find the Blue VO!CE for Yeti X here in Logitech G HUB or the Blue Sherpa software here from Blue Designs.

The software gives you more control over your audio than you likely thought possible. I mean, look at this quick video I shot.

Among the many settings and effects available through Blue VO!CE are a de-popper, noise reduction, expander, gate, de-esser, EQ, compression, limiter, and more. That many customization options could overwhelm all but the most experienced audio engineers among us. I know I was a bit intimidated the first time I fired it up. Thankfully, the software ships with the aforementioned collection of presets from which to choose. There’s a setting for a crisp and modern sound and another for warm and vintage capture. There’s even a setting that creates a “classic radio voice” so you can sound like the radio broadcaster of my (your?) youth.

Of course, if you want to be adventurous, or you already have a good deal of experience under your belt, you can manipulate the individual setting and create your unique signature sound. Of course, once you get things “just right,” you can save your custom settings and have them ready to use for your next recording session. Finally, if none of those options satisfy you, there’s also a gallery filled with custom settings others have created and shared. Be warned, however, once you go down that rabbit hole, there are so many cool user-created presets that you may be there for a while. 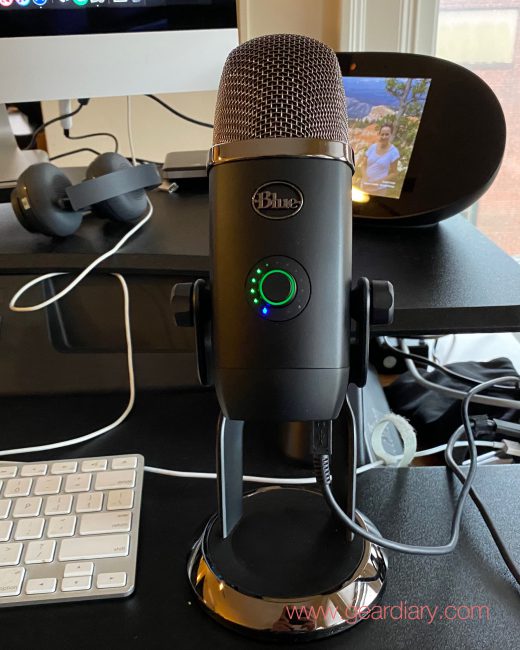 I think there are enough options via the presets that the vast majority of us don’t need to go into the individual settings. Think of it this way: I could buy several individual stocks and create a portfolio, or I could buy a mutual fund. Stocks aren’t my thing, so while I COULD buy them myself, it probably makes more sense to have my money in a mutual fund created and managed by people who do this for a living. Similarly, I could play with all the various settings to find the one that works best for me or, I can use the presets or one of the downloadable settings that others with more expertise have created.

The Yeti X Features Include: 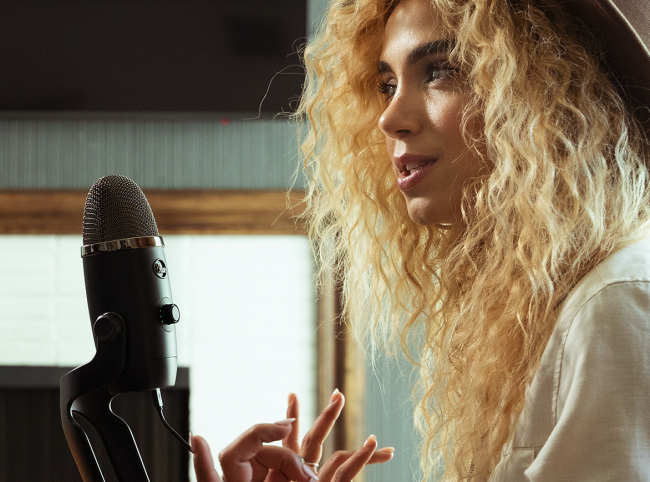 When I first got the Yeti X for review, I wasn’t able to get the Blue VO!CE software to work properly. It was beta software, but it seemed to work on some of my computers but not the main one that I use for writing. When I finally got the software working, I was impressed. The microphone is simple to use thanks to the fact that it is “plug and play.” The design looks amazing, and the included stand has enough heft to keep the microphone solidly in place while you record. 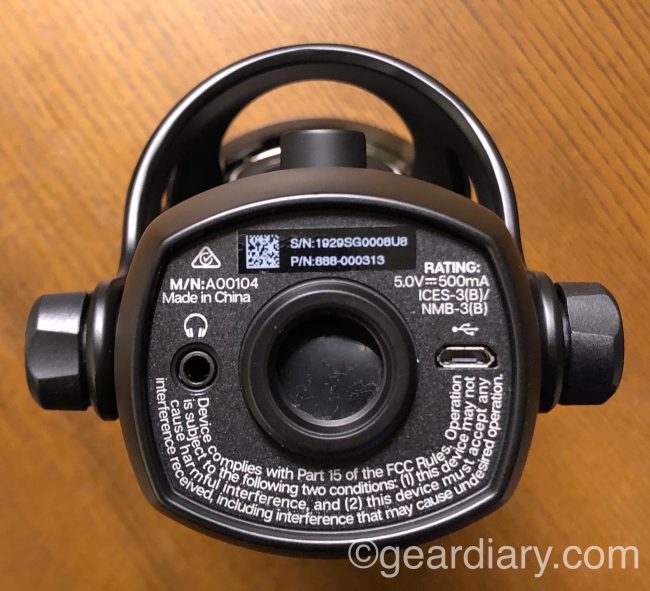 You can also remove the microphone from the stand and connect it to the Blue microphone arm I reviewed some months ago. Yes, the Yeti X still uses a micro-USB connector, but I’m hoping we see an update to USB-C in future versions. The 3.5mm input on the microphone means you can monitor the audio while you record. The smart nob gives you a remarkable degree of control over the audio. If you want even more control, you can use the GHub or Sherpa software. The software offers a series of easy-t0-use settings for those of us who want the ease of creating great content but will also keep experienced creatives busty thanks to all of the various settings that can be tweaked. It’s not inexpensive, but if you are looking for a quality microphone that will grow with you as you gain experience this is the one to beat. Check it out here.

What I Like: Plug and play; Has four condensers that can be used in four, easy to change, Polar Patterns; Smart Nob is really smart; 3.5mm input lets you monitor your recording and make adjustments in real-time; BlueVO!CE and GHub software give you even more control; Easy for beginners to use, powerful for experienced creatives