Posted By: Joel McLaughlin May 1, 2014
ShareTweet 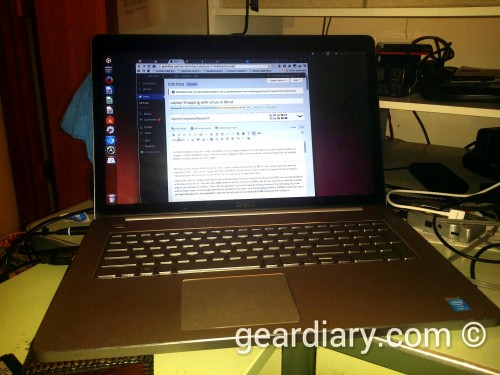 For the first time in many years, I was in the market for a new personal laptop You would think that buying a laptop to run Linux on would be easy, but with recent changes it’s more difficult than it has to be. With some research, and a few preparation steps done ahead of time, it won’t be a huge challenge.

Microsoft and the industry has all moved to a new standard in hardware, in that the BIOS of old is pretty much gone, and it’s been replaced by UEFI.  What are these programs? Well, both BIOS and UEFI have one job: to start the computer and start loading the Operating System be it Windows, Linux, or Mac OS X.

The new standard, UEFI, stands for Unified Extensible Firmware Interface, and it has all but replaced the old and tired BIOS that was first introduced at the dawn of the PC era. They have also added additional security to UEFI over BIOS with the new Secure Boot mode that is usually setup on new Windows 8.1 laptops. This is all well and good if you want to keep the existing Windows OS on the laptop, but if you want to install Linux, it can be tough — especially for someone new to Linux. So it has me thinking where would I go to get a new high-end laptop? It’s not impossible to find one that will work, but you should do some homework before doing so.

What are the options?

There are still two different options.  One is to just pick any old laptop and take your chances. The next is to got to a vendor who directly supports Linux or even sells it pre-installed. Both have their caveats. Both will work. Both require at least some research to make sure you buy something that works well for you.

Buy a Windows Laptop and Replace Windows with Linux

My first choice is to take my chances and purchase a laptop that has Windows pre-installed. This will probably require more research than going to a Linux-only hardware vendor. Why? Well, what I am coming to find out is that even if you purchase a laptop that has the same model number as one you have seen Linux installed on, sometimes the vendors switch up the hardware depending on who you buy it from. For instance, one laptop that was on my shortlist was the Lenovo Ideapad y510p. I found one blog post that stated that it had a Broadcom wireless card that was problematic on Linux and to a lesser extent Windows. So much so, that the author had decided to purchase a replacement card. I looked at the model of the y510p that my local Microcenter has in stock, and it had an Intel wireless card that has better Linux support, plus it had bout 2.4 GHz and 5GHz bands where the Broadcom did not.  Both had the model number y510p.  So sometimes you don’t know what you a really are getting when you go and buy just any old laptop that seems like it has decent specs.  This is less important for Windows than Linux, in that most of these laptops were designed with Windows in mind.  That doesn’t mean it won’t run Linux. Many will, but you might have to make some tough choices during the install. So it is extremely important to research what other user experiences have been both on the laptop model you want to buy and the hardware that is in it.

If I (or anyone else) wanted to go this route, it might not be a bad idea to bring a live distro on a CD or flash drive to boot the prospective laptop from it. A live distro is a full Linux distribution that will run from the CD or flash drive. This will give you a pretty good idea if you can get everything working.  If you can boot the live distro on the laptop and see a functioning WiFi card and desktop, then that is 90 percent of the battle.

Another thing that you should think about when you do this would be the install process itself. If secure boot is enabled for Windows, then you may need to disable it in order to install or boot Linux. Now there is support for secure boot in many Linux distros including Ubuntu, however there is always a chance that Linux won’t boot on a particular laptop with secure boot enabled. How to geek has a good guide on how to do this.  Windows should still boot, but you will not have the added security benefits of secure boot.

There are now many Linux vendors with sites from which you can order a laptop. Some of them I have worked with over the years when I reviewed laptops from them –ZaReason and System76 are the top two vendors that come to mind. They are both reliable, and they will send you a laptop that will not only run Linux out of the box but will come with it pre-installed. ZaReason will load many Linux distributions including Ubuntu, LinuxMint, or Fedora. System76 only loads Ubuntu, but if Ubuntu works than pretty much any Linux distro should also work.

There’s also Think Penguin which is another up and coming Linux only vendor. They will install ANY Linux distribution on your new machine for  you. Their prices are also very competitive with System76 or ZaReason. While their line isn’t as extensive as System76, you still have plenty of options to choose from.

You can’t go wrong with any of these vendors, as they will all run Linux without issue. The issue here is you will have to wait to get your laptop.  If you are patient, this can pay off. Support shouldn’t be an issue with them either, as almost every company has you send your laptop off if it needs warranty repair. Sadly, this is one area where buying from a local shop who builds their own laptops could pay off — if you can find one.

So what did I do?

After much deliberation, I went to Best Buy and took a look at what they had, and then I bought a Dell Inspiron 7000 series. Why?  The laptop booted the latest Ubuntu 14.04 LTS release just fine for one, and WiFi worked out of the box. I also love the construction of the laptop, as it’s made from metal which is less uncommon these days, although still not the norm. The touchscreen was really nice, as well.

Once I got it at home I tried both Fedora version 20 and the aforementioned Ubuntu 14.04; I settled on Ubuntu, as it seems to be the most stable of the two, and I had less issues getting things to work.  I, however, do like to jump from distro to distro at times, so I am not sure how long this will stick as I plan on trying Manjaro Linux on it as well.

Also, I dual-boot Linux and Windows 8.1 on the laptop, and I have not had to resort to legacy mode or turning off secure boot.  One caveat is that I do have to hit F12 on power up to bring up the UEFI menu to boot Windows 8.1. Other than that oddity, I am very satisfied with my purchase.

One reason I did not buy from a Linux-only vendor was the wait time.  Also, the prices, I found, were not as competitive as an off the shelf machine. Another consideration was that most all of the Linux-only vendors had laptop chassis that were mostly plastic.  Within a year, the Dell I bought will look much better than any of the laptops with plastic cases.

If you run Linux, tell me what you think.  Would you have made the same choice?  Share below.