Lenovo recently sent me a 23″ touchscreen ThinkCentre M90z all-in-one desktop computer to use for long-term evaluation. Because of its similar form factor to the ThinkCentre A70z (which had a 19″ non-touchscreen monitor), I already knew that I would like its space-saving design. But what I didn’t expect was how much I would come to appreciate the touchscreen; having a desktop computer with a touchscreen has never seemed that important to me before, as I am used to more traditional methods of input.

As with the A70z, the M90z came packaged in a ThinkCentre bag; minimal cardboard or other packing materials were used. The entire unboxing and setup took all of five minutes, as the computer and monitor are built into a single unit; only the power cord, wired keyboard and the mouse need to be plugged in. There are several different ways that the M90z can be ordered, including with or without a touchscreen and with different processors and memory configurations. I didn’t have a hand in picking my particular configuration, and it was sent to me like this … pretty much the top of the line for this particular model. Not shown are that there is a 500GB 7,200 rpm hard-drive and integrated WiFi (but no Bluetooth). It is a bit perplexing as to why this particular M90z came with 4GB RAM but only runs Windows 7 Pro in 32 bit, as opposed to 64. As such, only 2.8 GB of the RAM is usable which seems a huge waste, especially when considering that the 64 bit OS is a free option at checkout.

The M90z weighs a little less than 25 pounds, and it measures approximately 22″ wide x 16.75 tall x 4″ deep (including its rear swinging metal stand). Pretend for a moment that all of those certification and energy stickers aren’t there, and you can imagine how pleasingly clean the front of the M90z is; the only obvious items on the bezel are the webcam with a built-in microphone to its left and on the lower right, a power / sleep button. Along the bottom edge are hidden stereo speakers. I should mention right now that the speakers are anemic. Don’t get me wrong; they will do just fine for system sounds and music played in a quieter environment. But if you plan on watching DVDs in your off time, or if you truly want rich stereo sound when listening to your music, then you will likely want to invest in a set of decent external speakers.

Although this computer is aimed at business and enterprise customers, I think that it would look nice and work just as well when used as a sleek home computer or small office / home office machine. The shiny screen will be a concern for some, as it would seem like a touch-screen in particular should come with a matte surface; according to a Lenovo contact, the “high-gloss sheen on the screen is glass overlay used to protect the panel because of the touch input. The non-touch version does have a matte screen.” Over the last few weeks of use, I’ve been surprised that even though my fingers have been all over the screen, it hasn’t become particularly smudgy … go figure. The 2 megapixel webcam at the top of the screen has an actual lens cap … in light of recent privacy concerns caused by installed software (hello, Lower Merion school district!), I like it. You can slide the cover over the camera for complete and total privacy, which will be indicated by a red dot … Or you can open the lens cover and leave the camera operable. To the left of the power button there is a touch panel which appears completely dark when the computer is off or asleep; when awake, backlit indicators glow with symbols for WiFi and hard drive activity. Brush your fingers across the front however, and various screen adjustments will be revealed. On the right side are a USB port, headphone & microphone jacks, USB port, SD card slot, and a CD/DVD drive. The left has a spot with a slug over it; perhaps this is where the optional 6-in-1 card reader and Express Card slot go, or perhaps it’s for something entirely different. Only the enterprise guys at Lenovo know for sure. The tubular metal stand on the back allows for a 15º or 45º tilt; both work well for displaying and finger-mashing the screen. One of the things I most like about the two Lenovo all-in-ones I’ve tried are that they both have VESA 100mm mount, which means they will work with just about any mount rated at 25 pounds or more. I found a good selection of wall mounts at Ergotron, but there are also other desk, cart and workstation mounting solutions to choose from there (and from other companies), if perching the computer on a table simply won’t work for you. On the bottom of the back there’s a recessed area where various port and plug areas are tucked. On the bottom left there are a few slugged spots (presumably for other enterprise configurations), the power plug port, and a cable lock port. Worth noting is that there is no brick on the power cable, which makes tucking and concealing the cable that much easier. On the bottom right are an Ethernet port, four USB ports (for a total of six on the computer), a display port out (can be connected to a display port supporting monitor), and a VGA in port. Unlike the A70z which required removing some screws for services and upgrades, the M90z has a tool-less chassis, which lifts easily for RAM and hard drive service or upgrades. Since it comes with 500GB and 4GB RAM already, I don’t really think I should need this feature … but it’s there should I ever need it!

The touchscreen’s highest resolution is 1920 x 1080 (the same as Apple’s 21.5″ iMac), and it offers plenty of room for open webpages alongside other programs or widgets. I do wish Lenovo had crammed a few more pixels in, as I could easily enjoy items showing a bit smaller and tighter on this large, gorgeous screen. The M90z is a speedy machine; I was able to have several documents open at a time in Word and Excel, with Firefox also open and showing 30 tabbed sites, with Picasa open for photo editing and listening to music in iTunes … and there were no slowdowns, in fact my MacBook Pro wishes it could do as well. 😛

This writeup wouldn’t be complete without talking about the touch capabilities of the computer, which are quite impressive. Understanding that basic Windows 7 really isn’t set up for touch manipulation, there are some things that have been done to make the experience better. For starters, Lenovo uses a program called SimpleTap, which allows you to tap an icon once to open its corresponding program and tap and hold to effectively act as a left-click, opening the item’s menu. Other controls are accessible by clicking the SimpleTap desktop icon, including a larger volume slider, muting for the stereo speakers and microphones, and activating the webcam. You probably won’t ever try to write a paper or do major text entry of any kind by tapping the Windows onscreen keyboard, but if you happen to be walking by the computer and you want to click an item closed, if you want to tap numbers into the onscreen calculator, fingerpaint (or use a soft stylus like the AluPen I recently reviewed directly on the screen) in Microsoft Paint, or if you want to easily zoom in or out on a webpage using multitouch, then you will absolutely love the touchscreen. I find myself using my fingers more often than I thought I ever would.

One last feature I have to talk about may not be very useful for productivity, but it still manages to get a smile from me every time … the Microsoft Touch Pack for Windows 7 programs. Let’s start with the Lagoon screen saver. Using Microsoft Surface technology, up to 20 fish will swim onto the screen when the computer has been idle. Watching them gently swim around their little ecosystem is quite calming. But since this is Surface technology, there is a surprise. Tap the screen and the saver doesn’t disappear as it will when showing others. Instead, the fish will dart away — as if you had actually startled them in the water. Maybe I am just easily amused, but it pleases me to watch the fish dart away from my fingers as the ripples from my press disperse across the screen. An X in the upper right corner allows you to escape this screen saver when you’ve scared enough fish. Microsoft Surface Collage is a fun program for manipulating your photos and arranging them; you can also save the resulting display as a custom desktop. Three touch-based games are also included, Microsoft Blackboard, Microsoft Rebound and Microsoft Garden Pond. Playing these, I can see where having fingers all over your computer screen could eventually become a problem. 😉 The ThinkCentre M90z may be aimed at businesses, but there is also much for consumers to enjoy. This desktop has a gorgeous large screen, impressive computing power, is simple to set up and upgrade, and it has the added benefit of the touchscreen interface.

The ThinkCentre M90z all-in-one desktop computer is available directly from the manufacturer. If you order an M90z and mention the coupon code M90ZGEARDIARY, on top of the currently running web specials, you’ll get an Ultraslim Wireless Keyboard & Mouse with your purchase, for free.

What I Like: All in one, space-saving design; screen is huge and beautiful; there are multiple options for mounting computer to wall, desktop or workstation with available accessories; ample processing power; ample storage; includes a limited on-site 3 years parts / 3 years labor warranty

What Needs Improvement: The system speakers are anemic, so for anything but basic alerts plan on buying an external upgrade

Since you’ve made it this far, I’ll let you in on a secret … along with several other sites, Gear Diary will be giving away a Lenovo M90z soon. We’ll share more details as soon as we can. 🙂 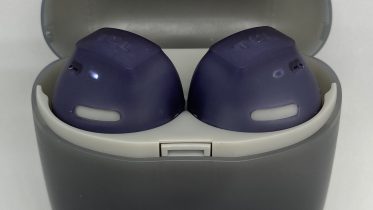