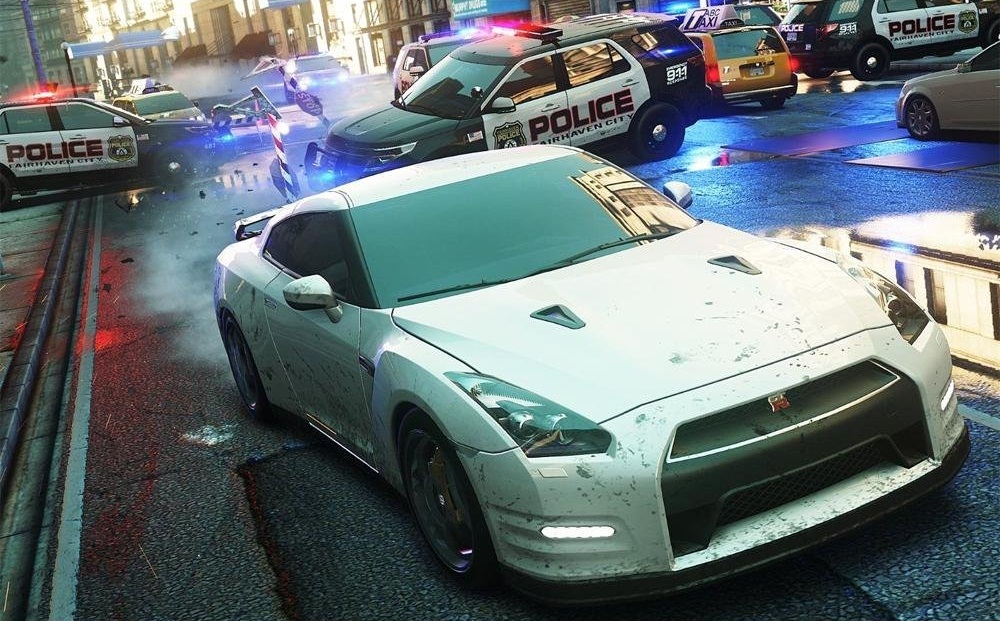 The open-world action in Need for Speed Most Wanted gives you the freedom to drive anywhere, discover hidden gameplay, meet up with your friends or just hang out and toy with law enforcement. Lose the cops … your way. Hit jumps and shortcuts, switch cars, lie low or head for terrain that plays to your vehicle’s unique strengths. Hit the gas and fight your way past cops and rivals using pure driving skill, aggression, high-end car tech and tons of nitrous. It’s all about you, your friends and the wildest selection of cars in a heavily policed, urban landscape.

• Nonstop multiplayer: No menus, no lobbies and no restrictions … just intense competition. Race, battle, crash and explore at your own pace with endless distractions in gameplay throughout the open world. There are team games, massive variety, persistent scoring, deep ranking and endless rewards and upgrades.

• It’s online driving as you’ve never seen it: Pick a car, hook up with your friends and jump into a nonstop playlist of competitive events. Influence the playlist by voting with your car. Jostle for position on the starting line. Cross the finish line and turn around to take out oncoming rivals.

• Beat your friends: Intense competition is at the heart of Most Wanted. Autolog records everything you do in the game, broadcasting a feed of your most newsworthy scores, speeds and times to your friends. That means as you drive the city-hitting jumps, racing and blasting through speed cameras-you’ll see your friends’ records. Whatever you do, there’s someone to beat.

The structured and unstructured gameplay create an entertaining mix where players can choose racing adventures while factoring risk, rewards, and response.

The familiar game series objective remains …outwit, out-muscle and outrun rivals and the cops.  The realistic police pursuits are usually initiated with physical wrecks, high speeds and other various ways. The higher the status; the higher the risk. 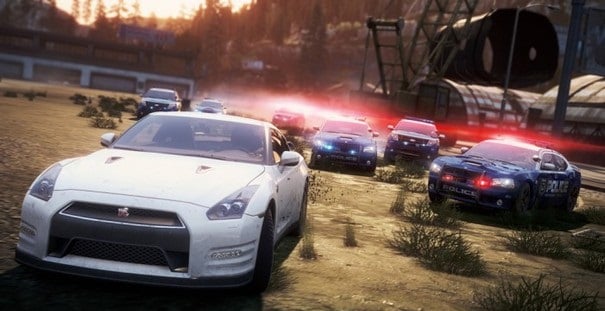 The police and rivals are aggressive…you should be too. Roadblocks, short cuts, hiding spots, switching cars, jumps, ramps, and spike traps can all factor into each police chases. Pursuits have fantastical potential for thrills, wreckage, and other entertaining mayhem.

After adjusting to the steering and handling, keep pedal to the metal for maximum success. Novices may encounter some initial frustration (e.g. catch object edges when hitting high-speed, etc.), but increasing the need for speed will reduce mistakes and increase reward.

Takedowns! Yes, Burnout game series fans can easily cross over to this game from great physical takedown of any adversary. The police are very easy to spot, but once race challenges are finished it is a challenge to immediately take out one of your rivals (not a regular “bystander” vehicle). Observant players might get lucky, but most should take their opportunity to bump rivals out during a race.

Players can easily make dangerous moves focusing on aggression and speed to counter their pursuers. Developers keep driver presence to a minimal. Players can only really see the helmeted driver after a wreck. No gore or implied death in the carnage just booming sound. The most important aspect is the start-up point after the wreck, which is usually in same spot or nearby spot if the wreck is huge. Start up point on roads after huge wrecks usually put players ahead of the event , so they have to backtrack to find it again (race point, billboard, shortcut, etc.)

Use problem solving, evasion, map reading, general observation (find objects), and reaction times to flourish in the free roaming activities, which can be great practice for the real races (populated throughout the map).

Finding cars and boosting reputations in races are fast way to climb the top ten most wanted list, which basically acts as an individual leader board for single players. Players take on other Most Wanted drivers every 100,000 points-then more on the upper levels. All the points acquired in the multiplayer apply to the single player, so a sense of progression and expansion never stops.

The overall Autolog 2 interface blankets the game with constant competition, social media elements, statistics, and recommendations if players need some direction. The Easy-Drive menu system, located in the upper left, offers endless challenges and options include vehicle customization. It takes some serious skill to navigate the menu while navigating the road – what fun would it be to pull over? Text message and updates occasionally block the view as well, particularly after a race, so just coast for a while to avoid major frustrations. A female announcer also speaks new audio notifications. 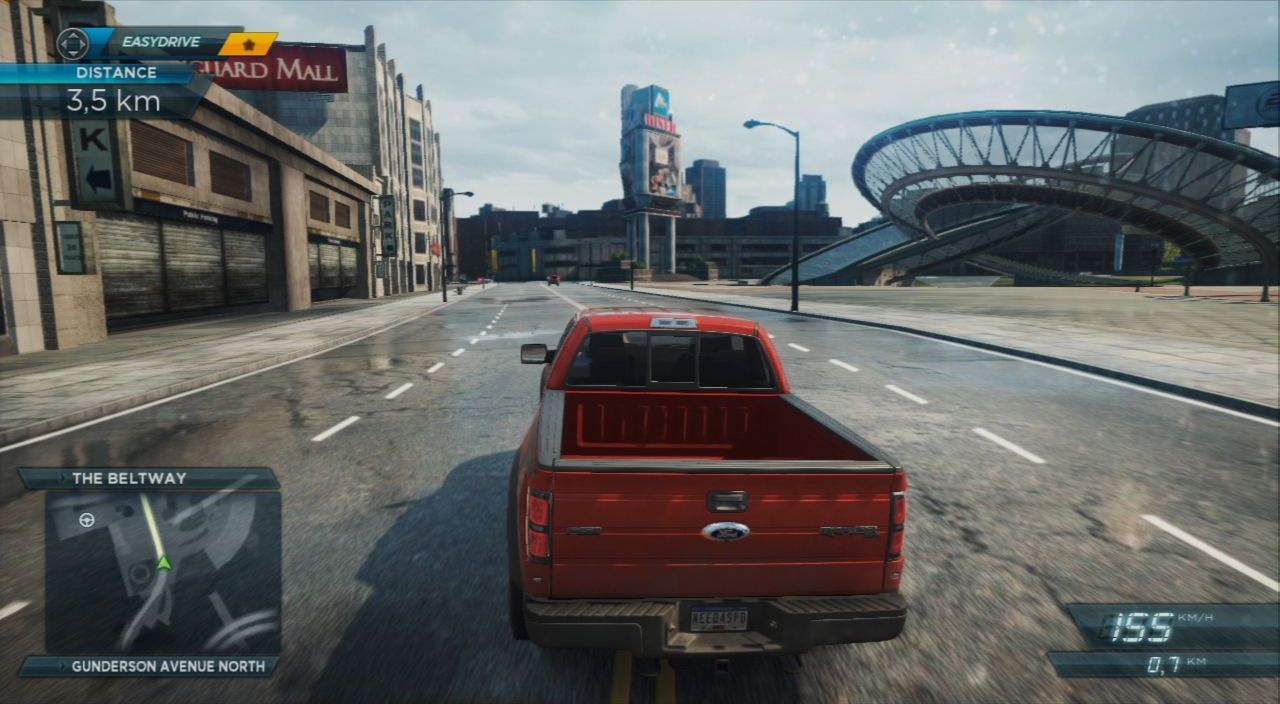 Damage animation and visuals have a basic “peel off effect” where the core car remains after each incident along with increasing damage visuals prompting players (hopefully) to go to repair stations, which are easy to spot with their bright light blue lights. These repair stations also change the vehicle color each time.

Press the select button for expanded options and a large red colored grid map. The useful map mode also helps spot different vehicles, which have their own individual races, challenges and mechanical upgrades to unlock. Players have decent variety and upgrades, which can’t be changed once chosen, so choose wisely when prompted, or just hit the triangle for automatically equal disbursement.

Cars include the Aston Martin V12 Vantage, Porsche 911 Carrera S, Audi R8 GT Spyder, Ford Focus RS500 and many others. If you can find it, then you can drive it. Indy-type race cars and trucks also help create an eclectic mix.

There are five races associated with each car including speed runs and traditional circuit races as these races range in difficulty – easy, medium and hard. Police pursuits can still occur during races. Race goals include best time and fastest speed through a speed camera. 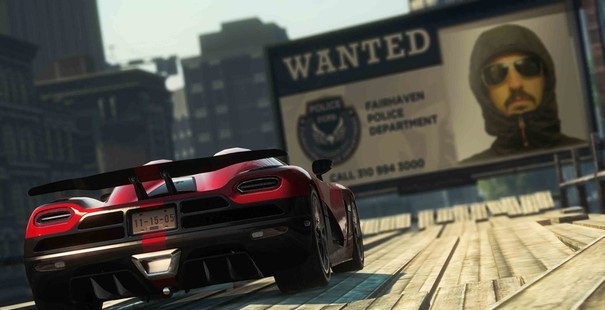 You can always get a rush with a crash through billboards and other obstacles. Player’s faces appear on previously smashed billboards, so it is easy to spot new ones. Size and density are the biggest factors when determining when and how to crash through obstacles. Of course, developers take full advantage of marketing here with various EA related brand titles on the billboards like “Visceral Games” and “Criterion Games”, creators of the Burnout game series.

Available in the in-game store (access through Easy Drive menu in upper left or main menu (press select button), the current downloadable content (DLC) –  includes the “Time Saver Pack”, which let players access to every car in multiplayer and the “jackspots” locations to every car for single player. After downloading the Ultimate Speed Pack, I initially had a couple graphic issues (blank background so could not see where driving, etc.), but then it corrected.

The physics provide nice realism and the handling flows well, especially with various camera views (e.g. the cockpit view) for even more unique experiences. The horn does not really change vehicle behavior much, but seems to affect bystanders a bit.

This open world racing game helps players create their own experience as they speed, wreck, and evade rivals and police. Players can spend the time acquiring points and mastering all the options/game modes and conquer new challenges based on kinetic variables like weather, roadway conditions, physics and navigation.

Review: Need for Speed Most Wanted