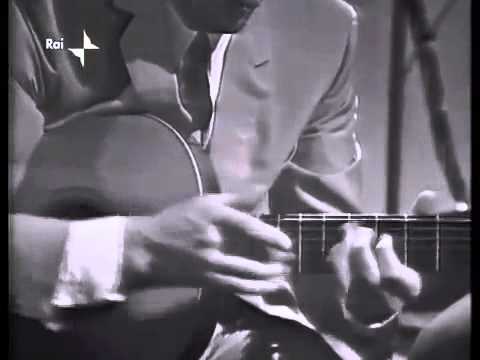 Back in the late 1970s, the first Van Halen record launched and featured a mind-blowing solo guitar bit by Eddie Van Halen called ‘Eruption’. The solo featured loads of two-handed tapping, hammer-ons and pull-offs, integrated into his technique in a way not heard before in popular rock music. A few years later, a young guitarist named Stanley Jordan was discovered playing in the subway with an innovative technique that allowed him to play multiple parts using both hands in a pianistic style. For many, that is the lineage of two-handed guitar styles – but these styles existed before either of these gentlemen were born!

This week, a video of Italian amateur guitarist Vittorio Camardese has been making the rounds … and it is simply stunning. This isn’t some early demonstration of a possible direction – this shows the technique fully realized and implemented by a virtuoso. Check it out!

But he wasn’t the first one doing it – in the 50s Jimmie Webster got patents for his guitar alterations for two-handed tapping, and made several recordings. There is a cool page here.

Then there was the innovative luthier and guitarist Dave Bunker who appeared on Ozark Jubilee in around 1960 playing a dual-fretboard guitar called the duo-lectar. The video quality is poor, but definitely intriguing – it reminds me more of the Chapman Stick or some of Pat Metheny’s multi-function guitars more than a standard two-handed technique … but is awesome nonetheless:

And while watching these things, it is still a joy to go back to the beginnings of the modern context for two-handed tapping.

Here is Eddie Van Halen playing Eruption from a live 1978 show right after the release of their debut album:

Of course these aren’t the only ones, with many other guitarists through the years incorporating some amount of two-handed techniques in their playing. If you know of other major contributors to the style, chime in with a comment!