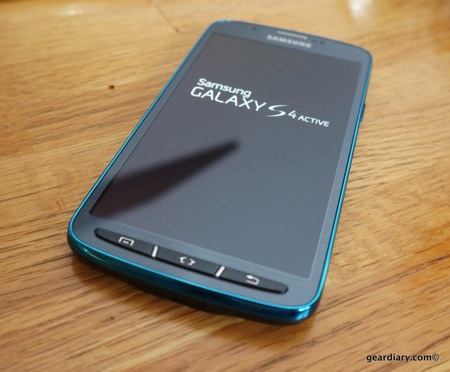 I’m going to surprise myself by writing this, but were I in the market for a new phone right now I think the Samsung Galaxy S4 Active would be at the top of my list of possibilities. It’s packed with power, it feels great in the hand, and it overcomes many of the issues I have with the Samsung Galaxy S4.

Because the two phones are running the same operating system and have the same Samsung bells, whistles and capabilities such as Air View, Air Gesture and Smart Pause, I’m not going to run down those specifics. Instead, I will refer you to Mitchell’s excellent review of the Samsung Galaxy S4 (read it) and Judie’s post “Five Reasons Why the Samsung GALAXY S4 is a Great Android Phone” (read the post). 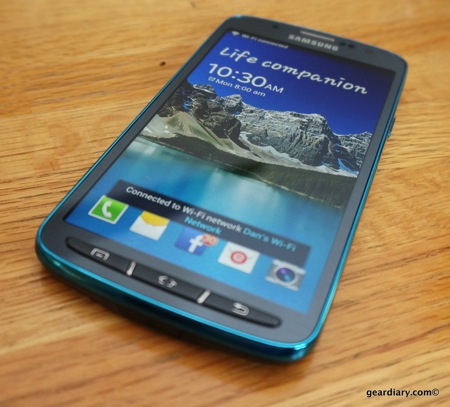 Both the S4 and the S4 Active have a Snapdragon 600 processor and come with 2 GB of RAM. The phone comes with 16 GB of storage, but there is also the ability to add a microSD card to up the storage capacity. In addition, both versions of the Galaxy S4 have a 5″ display with the resolution of 1080P. They are absolutely gorgeous to look at and to use.

There are some differences: The Galaxy S4 has an HD Super AMOLED screen, while the S4 Active has a 5″ FHD TFT display. It is made from Gorilla Glass and is designed to stand up to an active lifestyle. Honestly the difference in the screens isn’t a huge deal for me, and I think that the screen on the Active looks just fine.

The Samsung Galaxy S4 Active has a more rugged look and feel than the S4. In addition, it comes in a blue color that you are either going to love or hate. Two black bars on the back, one at the top and one at the bottom are secured with rivets and give the phone a rugged appearance. 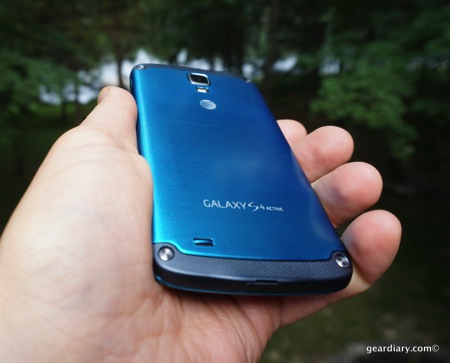 Another big difference between the S4 and the S4 Active is found in the cameras. The S4 has a 13 megapixel camera, while the S4 active goes back to the 8 megapixel camera that was found on the Samsung Galaxy S3. Honestly, I find the Active takes terrific pictures and as you can see in the video I shot, even the front facing camera does a decent job.

People who do a spec for spec comparison will find that the Samsung Galaxy S4 beats the S4 Active. But if we have learned anything over the past few years, it is the fact that specifications aren’t the end all and be all of device comparisons. 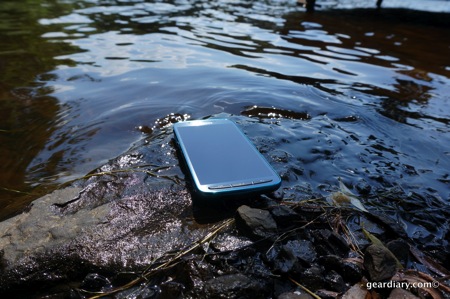 The original S4 is a piece of technological wizardry packaged in a flimsy light plastic case. I don’t like the way it looks, nor do I like the way it feels in the hand. The S4 comes off as simply feeling cheap. The S4 Active, on the other hand, feels like a serious piece of equipment. It has far more heft and a build quality, and it looks and feels like an entirely different animal than its sibling. 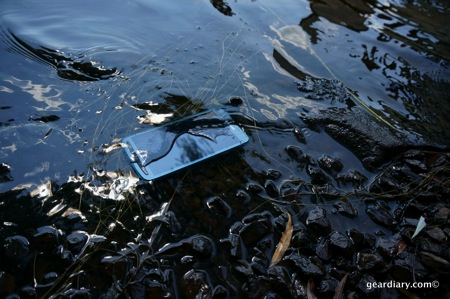 Or you can take the device and actually put it on a rock that is partially submerged without worrying the phone will be damaged. 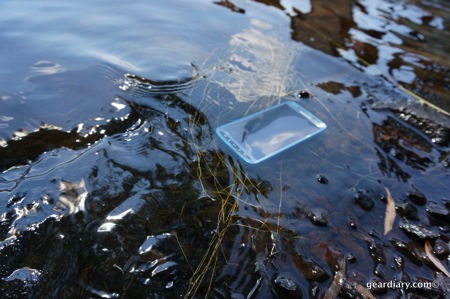 In fact, you can take the phone and actually dump it INTO the water without the need to put your phone into a special waterproof case. That’s because the S4 Active is rated as IP67 and is water-resistant and dust-resistant. The phone can go into the water up to a depth of 1 meter for up to 30 minutes. And while 1 meter for half an hour may not sound like a lot, it is the difference between having a phone that can get dunked in a toilet or sink … and needing to get a new one. Sure, you have to make certain the back is sealed properly, but that is easily taken care up with a few targeted presses along the back and sides. 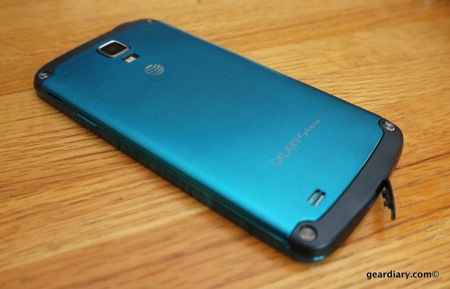 One oddity of the S4 Active is that, while the headphone jack is water-resistant and required no plug, the same cannot be said for the microUSB port. It has a flimsy door to seal water out, and it needs to be properly positioned for the phone to be sealed. Why Samsung didn’t apply the same waterproofing to the microUSB port as it did to the 3.5mm headphone jack is beyond me. 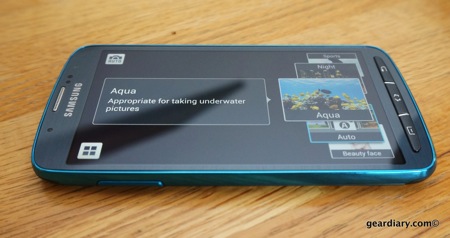 The S4 Active also includes a mode for taking pictures underwater. Aqua mode adjusts the camera’s exposure settings to be better suited for underwater shots. This mode also remaps the shutter button to the volume up and down buttons since the touchscreen won’t function under water.

It is worth noting that once the camera has been dunked in water, the audio — both in and out of the camera — will be impacted until the water evaporates. As you can hear in the video I shot with it, I learned this the hard way.

Similarly you can use the LED flash as a torch and remap the Volume Up button so it activates the light without your having to turn on the phone’s screen. I can see this being helpful if you need a bit of illumination but don’t want something bright like the screen that might wake someone else. 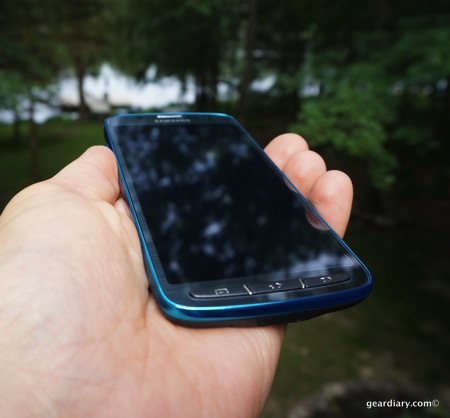 I’m super-impressed with the Samsung Galaxy S4 Active, and I would choose it over the standard S4 in a heartbeat. Sure you’ll have to put up with the turquoise color, the lower pixel camera, and the slightly lower quality screen, but the tradeoff between those things and gaining a phone that feels substantial and can go for a swim without being damaged is well worth it. Now if only I had a phone upgrade available to me…

What I Like: Sturdier build than the S4; Sealed for brief immersion in water; Feels more substantial but still packs the S4’s features

What Needs Improvement: Screen and camera a step back from the S4; microUSB port needs to be properly sealed before submersion