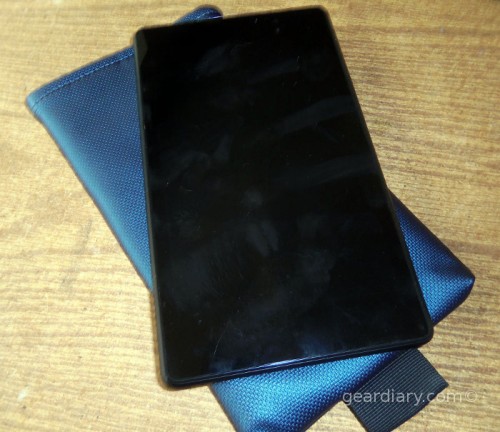 The 2013 edition of the Nexus 7 has been available for a couple of months;  I recently decided to make the leap from a 10″ tablet to this 7″ beauty. While there isn’t a new name, I have to say Google has done a great job refining this popular tablet. For now, I believe it is the best Android tablet available. 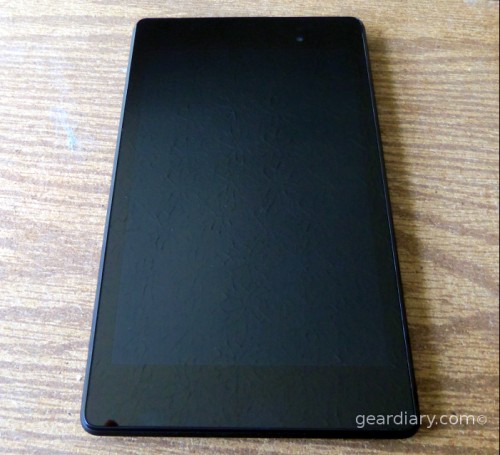 Google has not only beefed up the new Nexus’s specs, but they were also able to make the tablet thinner than the previous generation. Even when it is in a case, I can comfortably hold the Nexus 7 for hours; that just isn’t possible with my old tablet, an ASUS EeePad Transformer.  Speaking of the Transformer, it was also one of the best tablets available when Google started making Android OS tablet friendly. In fact, it was the Transformer and other ASUS tablets that convinced Google to choose ASUS to build their Nexus tablet line. 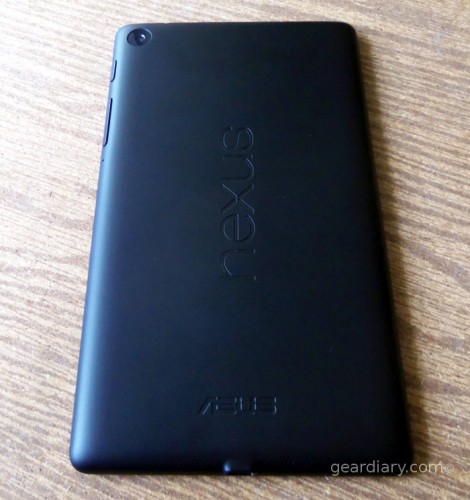 How does it feel to go from a 10 inch to a 7 inch?  It feels amazing to me.  I use the Nexus 7 for many more things than the EeePad.  Many times the EeePad stayed at my desk while I took a pad of paper to a meeting, but that doesn’t happen any more.  The Nexus 7 even goes with me to the grocery store since it’s so small.

They really beefed up the screen, CPU and RAM this year, and it made a difference. First, the screen itself is gorgeous; the 1080p screen is so crisp and the colors are vibrant. I have almost completely switched to the Nexus 7 for reading since the screen is so good. Second, the extra gig of RAM really helps when launching apps and switching between them. The stock launcher is silky smooth when browsing for apps and widgets.  As for games, I played a bit of Madden 25 on this, and the graphics are smooth and the game performs as expected. Granted, I’m not much of a gamer, but I think that the Nexus 7 should be fine for most of the Android games currently available. 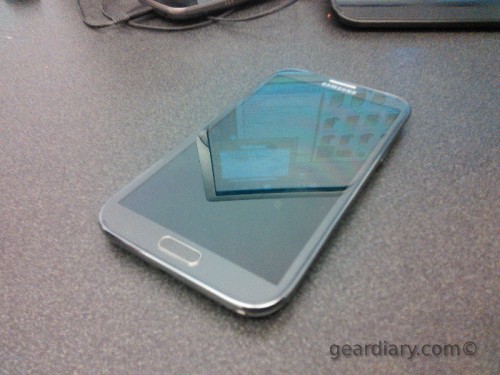 Like the previous generation, the 2013 Nexus 7 also has a front-facing camera, and now it adds a rear facing camera. While I am not a fan of cameras on a tablet’s rear, it’s nice that it’s there.  There is no flash on this camera though, so it’s only really useful when you have a lot of light.  Even then, I’d rather use my Galaxy Nexus for a camera before the one on this tablet.

The Nexus 7 includes WiFi, and in some models, LTE; I have a 32 GB WiFi only model. I have had no issues connecting to either my work or my home networks. The 802.11n WiFI is dual band on both the 2.4 and 5 GHz band, but I have only been able to test the 2.4 GHz band, and it works as it should.

The LTE version will work on T-mobile and AT&T; Verizon is still dragging out the launch of the device on their network.  Jeff Jarvis of This Week in Google is a very vocal opponent of this problem, and there’s really no excuse for Verizon to not allow this on their network now. In fact, people have removed the SIM from their Verizon phone and put it in the LTE Nexus 7, and it worked just fine.  Why Verizon is being so draconian is beyond me. Some will say it’s their network and they get the right to say what is allowed and what isn’t, but LTE is governed by standards; if a device is made to satisfy that standard, why would Verizon NOT want the device on their network? No one really knows, and Verizon isn’t saying, but why their process for certifying devices and firmware updates to my Galaxy Nexus takes so long is beyond me. 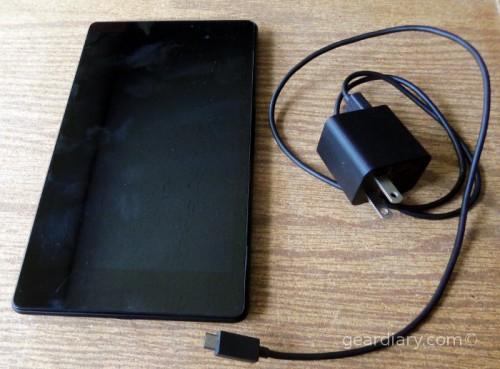 One of my favorite features of the EeePad Transformer is the keyboard dock, and my favorite feature of that dock was the battery in the dock. This gave my EeePad Transformer some of the best battery life of any Android tablet available at the time. Well, the Nexus 7 has pleasantly surprised me with its battery life.  I can go for nearly 20 hours with intermittent use and 10-14 hours with heavy use. My evenings, since buying the Nexus 7, have consisted of watching tons of video on Netflix and listening to downloaded video podcasts, and I STILL have battery life even after that! It has surpassed my expectations. Now if I could just get a phone with a battery that lasts as long, then I would be a happy camper!

The only accessory listed in the play store is a slip case, but since the Nexus 7 now supports Qi wireless charging, you could also use the wireless charging orb for the Nexus 4 to charge the Nexus 7. Since Qi is a standard, you can find many other Qi chargers elsewhere that are nicer and cheaper. For a little more, you can even get a Qi charger with an integrated battery.

With all of these changes, I have no idea why Google didn’t choose to rename the Nexus, and therein lies one of the issues I have with this latest version of the Nexus 7. How is one supposed to differentiate the device from last year’s model? This is important, because the new Nexus 7 is thinner than last years model, which means that some cases made specifically for the 2012 edition won’t work on the 2013 and vice versa. This makes it difficult to find a case that is made to fit the thinner 2013 version. I have found that there are some things you can look for to differentiate models when looking for a case for the new device, including the terms “2013”, “FHD” or “Full HD”.

For me, the biggest problem with productivity on the Nexus 7 is its wide-screen form factor. What works well for reading is portrait mode, and while the Nexus is a little long in portrait mode, a plus is that it also gives the device enough space for application navigation buttons. The problem comes when you want to create documents. While the Nexus does work for this, the landscape mode doesn’t provide enough vertical screen space to make it ideal when working with word documents. This is one area where the iPad really shines with its 4:3 screen ratio. However, this is really just a nit. I use my Nexus for productivity in and out the office; it goes with me to meetings, I take notes with it, read PDF’s, and more.  I can even use VMWare’s Horizon View client to bring up a Windows virtual session to do work on the device in a pinch. My next purchase for the Nexus will probably be a case that integrates a Bluetooth keyboard so I can do even more.

Google rolling out Quickoffice for free has been a boon to my getting work done on the Nexus 7, as like it or not most businesses still use Office for document creation.  I can both create and view standard Microsoft Office documents using Quickoffice; I even use Quickoffice as my PDF reader.

One area that is still lacking, but that is starting to get better in Android is audio production. IK MultiMedia’s iRig Recorder has finally hit Android, and while it has had some bumps, recent versions seem to be getting better. I’ve also picked up an app called USB Audio Recorder Pro that lets me use the Nexus 7 to record audio with a USB microphone or a USB to XLR converter like the Blue Icicle, and the quality of the recording is very good. The only extra thing you’ll need to make this work is a USB OTG cable that converts the MicroUSB port to a Host USB port. A host port is what you usually find on most laptops and desktops. Once you have this, then any USB device can plug into the Nexus 7. They may not necessarily work, but I have found most audio devices seem to work fine, as do keyboards and mice. I was unable to get storage devices to work with the Nexus 7, but if you are feeling adventurous you can probably load a custom ROM to get that working.  While it still isn’t anywhere near the iPad with regard to support for audio production, things are improving with each new version of Android and with each new device.

When Google launched the first Nexus 7, Android tablets weren’t doing well at all. The Nexus 7 really helped launch the Android tablet category, thanks to its excellent hardware and price point.  Google could have just bumped up the device specs and launched an entirely new device, and in some respects that is what they have done. The new Nexus 7 is thinner, and its improved screen, extra RAM, and its quad-core processor really help make the Nexus 7 the best Android tablet that’s available. I’m really excited to see what Google will do with the Nexus 5 and with future Nexus tablets.

What I like: A better tablet in every respect than the original Nexus 7; this is the Android tablet to buy this year

What Needs Improvement: It almost needs a new name so you can more easily differentiate between this and the previous Nexus versions