Most of your business contacts probably include their contact information in their email signatures. But unless you have an assistant, mining all of that incoming data and inserting it into your address book would be a huge chore; trying to glean that information from past years’ emails would seem incredibly daunting. But not if you use two magical products from Evercontact.

Dan wrote about Evercontact, formerly known as Write That Name, some time ago, and he and I have been utilizing it since. Nearly every day I receive an email giving me the rundown on contacts that it has mined for new or updated information which are then updated in my Google Address Book. What this boils down to is one less daily chore for me to keep up with. I can’t even begin to guess how many hours it has saved me since 2011.

But here’s the thing … I didn’t always use Evercontact for Gmail, and I have had my Gear Diary email address on a Gmail server since 2009 or so. That means there are quite a few contacts that may not have been included in real-time scanning, which is where Evercontact Flashback comes in. 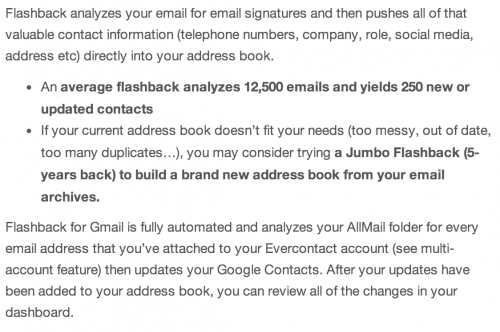 It took 48 hours for Flashback to run through my Gear Diary account, and this is what it found … 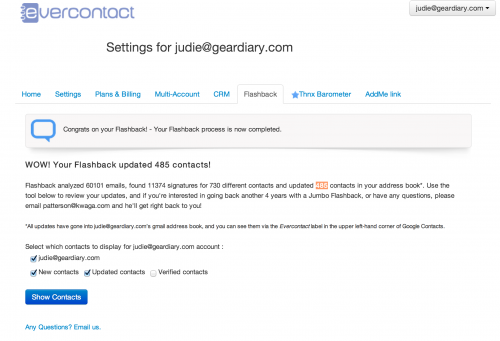 I have no idea how many hours I might have spent going through those 60,101 emails, looking for past contacts and their information before I ultimately gave up … but I doubt I would have made it through more than a couple hundred. Because of Flashback, I don’t have to bother. Sure, there are a few contacts that were found that I don’t necessarily need to keep, but there were some significant bits of treasure included in that black hole of information.

If you have an out of control inbox, then you really ought to take a look at Evercontact and Evercontact Flashback. These products work with Gmail and Outlook; there are several subscription plans, and they are all ultimately much less expensive (and aggravating) than hiring an assistant or taking the time to do the data mining yourself.