Ever since I got Amplitube it has become my go-to tuner. Whether I plug in or use the built-in mic on either iPad or iPhone, I always check my tuning in Amplitube before I get started playing – even if I am using another app! Now they have introduced UltraTuner, and it is the best tuner I have ever used! 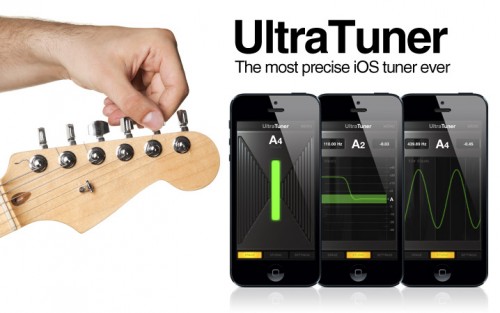 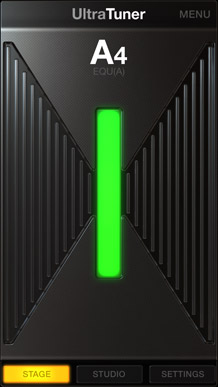 Impressions:
So when you think about a tuner, it is a pretty simple device – it detects and grabs a waveform and attempts to determine the frequency. This is something engineers have done with oscilloscopes for decades, and instrument tuners have similarly been around for quite a while.

But there is a difference between a $100 hardware tuner and an app that uses your phone’s microphone as the input. I have found that the built-in tuners in Amplitube or Garageband do well with a clean, direct guitar signal, but feed them a processed signal or use them in a noisy space and the performance quickly declines. 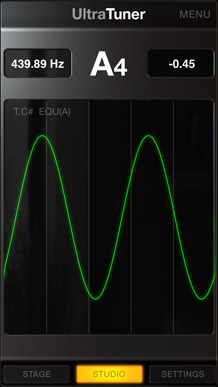 Enter UltraTuner. Featuring the ability to switch the interface to whatever is most useful, non-chromatic instrument tuning, and the ability to see the waveforms of your input, suddenly you have more power and control than with any tuner I’ve ever used.

For standard tuning, the ‘Stage Mode’ lets you quickly hone in on the right note. For more precision, switch to ‘Studio Mode’ and tweak your tuning until you freeze the frequency graph to the perfect pitch!

I tend to use Studio Mode more than anything else, as it gives me the best feedback to how close I am to perfect tuning. I have played around with some of the other functionality, from inter-app communications to non-chromatic capabilities and so on, but for me the best value is just using the tuner and appreciating how quickly and efficiently it works in any environment. 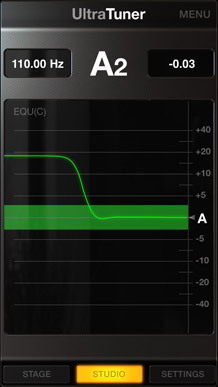 Price: $4.99 either as a stand-alone app, or you can buy it as an in-app purchase through Amplitube.

What I Like: Precision tuning; loads of features; stage and studio modes focus on specific needs.