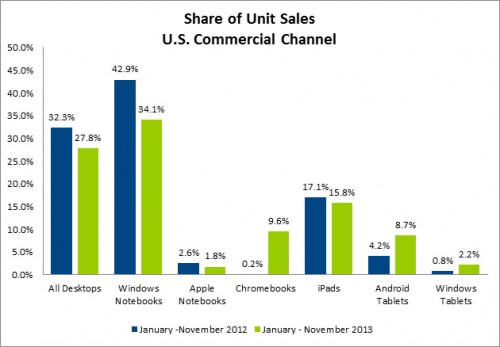 If someone suggested to me a year ago we would be looking back at data showing that more than 21% of laptops sold last year were Chromebooks … I would have laughed heartily in their face. I mean, to me these were pretty much netbooks that only run a browser. Yet that is the reality at the end of 2013.

To see what I mean, look at this summary based on NPD estimates of 2013 sales:

There is other analysis – regarding how the Chromebook surge means trouble for Microsoft, and how plummeting PC sales put Apple and the PC on level ground.

Way back in 2011 Carly wrote about the original CR48 Chromebook, and last August I got a Samsung Chromebook and decided to try one of my ‘all in’ tests … which quickly failed. Here are my main reasons:

•Performance Issues: when I started using the Chromebook, I was dismayed at the low performance. Then I trimmed the number of tabs I had opening at once, and greatly trimmed the number of active extensions, and suddenly the Chromebook was very peppy!
•Video Editing: can’t do it – I tried WeVideo but it was not going to produce even the mediocre results I normally manage. So I still needed my Mac.
•Gaming: I am currently reviewing games on iPad, iPhone, Mac and PC … the Chromebook runs none of them. So I already had to have my iPad with me frequently.
•Image Editing: I just discovered (because a search on the Chrome store fails) the Google+ image editor. It is a solid editor – but still lacks many features from Picasa that I loved, and because I am using an iPhone, it makes the process a pain to get from taking a picture to having an edited version.
•Networking Problems:And … here is where it all died for me. Bottom line, the Chromebook wouldn’t connect to my work WiFi network – the same network I connect my Mac, iPhone, iPad and about three dozen Android phones and tablets over the last few years.

But as I have also talked about, as the kids headed back to school and my wife’s Sony laptop started to experience some slowdowns and hiccups, the Chromebook suddenly started getting used – a lot. And the ways it has been used tell me much about why it is so successful:
• It is great for email and web browsing.
• User profiles keep everyone separate.
• Integrated Google Docs makes it excellent for the kids’ school work.
• Google Cloud Print is simple and convenient to set up and use.

Sure there are still plenty of limitations in terms of performance and functionality – but for the vast majority of people those things constitute the bulk of what they need to do with a computer.

The other thing – Chromebooks are CHEAP. The current best-selling ACER and Samsung each sell for ~$200. That is less than half the price of a low-end Windows laptop, and less than a quarter of a low-end Mac laptop!

While desktops and laptops running Windows or Mac OS are still the highest selling devices, tablets are stronger every year, and now Chromebooks have emerged to fill a need. The need is the same as when netbooks launched – inexpensive, portable and intended for light tasks – but a Chromebook is a much better tool for the job than a netbook ever was!