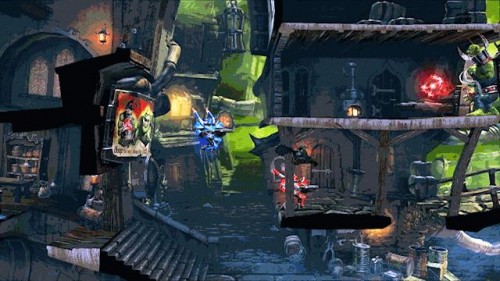 Back in July of 2013 I wrote about Project Ravensdale from Black Forest Games, noting that their success with the multi-platform hit Giana Sisters: Twisted Dreams made them a trusted developer. Ravensdale’s Kickstarter failed, and now after regrouping Black Forest Games has named the final game DieselStörmers and launched a new Kickstarter and they’re well on their way to $50,000!

URL of the Project: https://www.kickstarter.com/projects/project-giana/dieselstormers

DieselStörmers is a furious run & gun game that follows the inhabitants of Ravensdale taking back their city from a rampaging ork horde. On release, the game will have a story/campaign mode that allows you to pick among a range of different missions with varying difficulties, objectives and parameters.

You can play in singleplayer mode or with up to four teammates in co-op multiplayer mode to enable additional team strategies like energy arcs between players, team upgrades, complementing shot patterns and the parallel use of environmental objects. Co-op at its best.

With your support we will bring the game to Steam’s Early Access program. This is the perfect program for indie developers to involve dedicated players in the games development. The final game will be released on Windows PC, followed by Linux and Mac versions (Steam). We are also planning for XboxOne, PS4 and WiiU. Steam provides a great infrastructure for online co-op-games. As supporters of DRM-free gaming (see Giana Sisters) we will provide a DRM free version as soon as the sales success makes it viable to set up this infrastructure ourselves.

There are two main reasons I hopped all over this game:
– Black Forest Games has proven itself with game releases and on Kickstarter.
– Just LOOK at that trailer! Everything great about Ravensdale originally is even better now!

Seriously, when you are putting down money for a 2015 release you want some certainty that the team will deliver. Black Forest Games has already done that, and I have no doubt that they will come in on time and on budget again, and that the game will absolutely be a blast!

Here is a look at DieselStörmers: