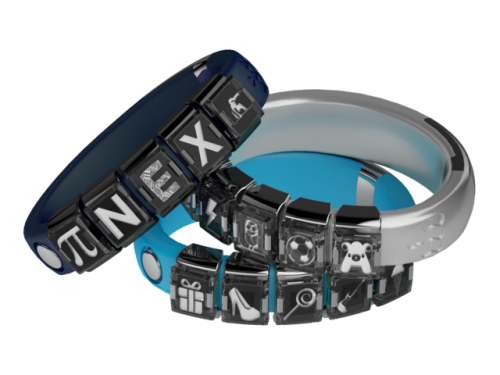 The NEX Band is the world’s first modular wearable that gives you social and gaming notifications. The folks behind the NEX Band are issuing their call to developers today, asking talented devs to download the API and SDK and start developing to monetize their physical and virtual components.

The NEX Band uses interchangeable “mods,” to provide social and gaming notifications to the user. You can use up to 5 mods at a time. The NEX band takes advantage of Mighty Cast’s proprietary base and token technology to connect to the cloud. On the NEX Band, each token can represent a mobile app, game, or social network. The cool thing about the NEX Band is that the tokens can be collected and traded with your friends, and the tokens can represent different game characters, weapons, upgrades, etc. Basically, the NEX Band can be used as a game console on your wrist.

The NEX Band will use a USB connector to charge the lithium polymer battery and it will have haptic feedback using a vibration motor. It connects to your iPhone or Android phone using Bluetooth 4.0 low-energy technology. And, the individual tokens will have their own colored LEDs that will light up in concert with the notifications.

We will let you know as soon as we hear more news about the NEX Band, including future apps, release dates, etc.