If privacy is not a big issue for you, try out this app specially for use without internet connection or mobile phone coverage. Open Garden’s proprietary mobile app provide public/peer-to-peer communication where users connect to Bluetooth, Wi-Fi, or Apple’s Multipeer Connectivity Framework.

Users can use an alias name while Firechat rooms can host as many as 10,000 users at the same time.

Firechat has been on Google Play (2.3 and up) since January and just released on iTunes (iOS 7.0 or later; for iPhone, iPad, and iPod touch; optimized for iPhone 5, iPhone 6, and iPhone 6 Plus.). This app gained notoriety when used among civil protesters in Iraq and Hong Kong to get around government internet restrictions. 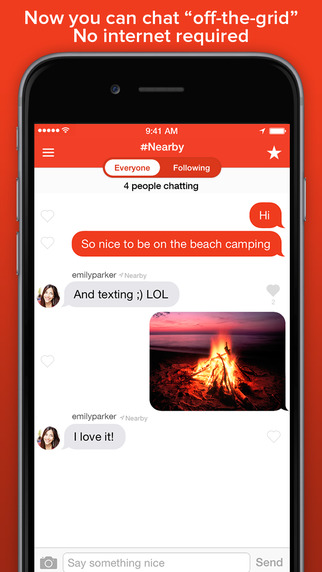 Firechat first became popular in 2014 in other countries with government restrictions on internet use. Are you going to have a ‘fireside chat’?