You can’t go down a single highway in Texas without passing at least one GMC Yukon Denali; they are as ubiquitous as deer on the side of the road and pick-up trucks. There’s a reason for this: The Yukon Denali (or simply Denali, as we call them) is the vehicle of choice for anyone with a family.

While the price tag on the newest Yukon Denali models is what stops a lot of people from buying the current version, it’s still fun to see the improvements and upgrades that inevitably roll out.

Before I say anything more, I should mention that while the Denali badging is now on quite a few GMC vehicles — including the Terrain, Acadia, and their trucks — where I live, Denali pretty much means one thing: a tricked out GMC Yukon. This perception may make GMC execs crazy, but that’s how strong (and recognized) the Denali branding is here in Texas.

I just returned from Beaver Creek, Colorado, where I had the opportunity to drive the 2018 GMC Yukon Denali and Yukon XL Denali. I should mention that Kev and I own a 2008 Yukon XL Denali (and we owned a 2003 Yukon XL Denali before that), so I knew going into this drive that I was going to likely come out of it with a serious case of upgrade envy. While that absolutely did happen, I also returned with a new appreciation for the model we already own.

Let’s start with an assessment of who the Denali is made for. Where I live, it’s common for the man of the house to own a pick-up truck or some other larger car as his daily driver. Since mom is usually the one playing taxi driver to the kids, it is inevitable to see a line-up of them at the school drop-off and any after-school activities. On family vacations, the Denali is the vehicle everyone loads into. 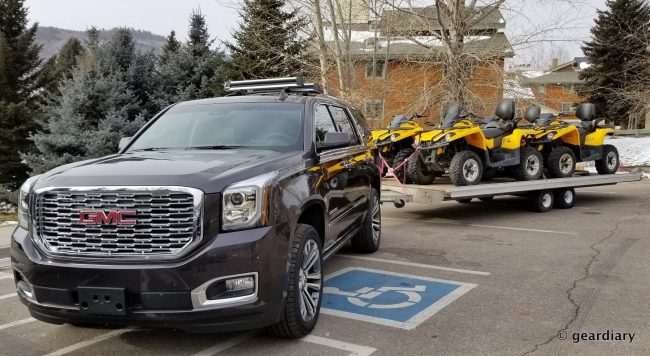 The GMC Yukon Denali can seat up to seven people comfortably with plenty of room for their gear. There are two ridiculously comfortable and adjustable seats up front (both are heated and vented, standard), two single middle seats (heated, standard) with a walk space in between them, and a 60/40 third-row seat.

Most of the time, Kev and I keep our manual third-row seats folded up for the extra cargo space; of course, the 2018 GMC Yukon Denali has a one-press button that folds the third-row seats up or down. Depending on whether you have the XL or not, this makes the available cargo space even more massive.

Even with the third-row seats up and two people’s luggage loaded, there is still plenty of room. 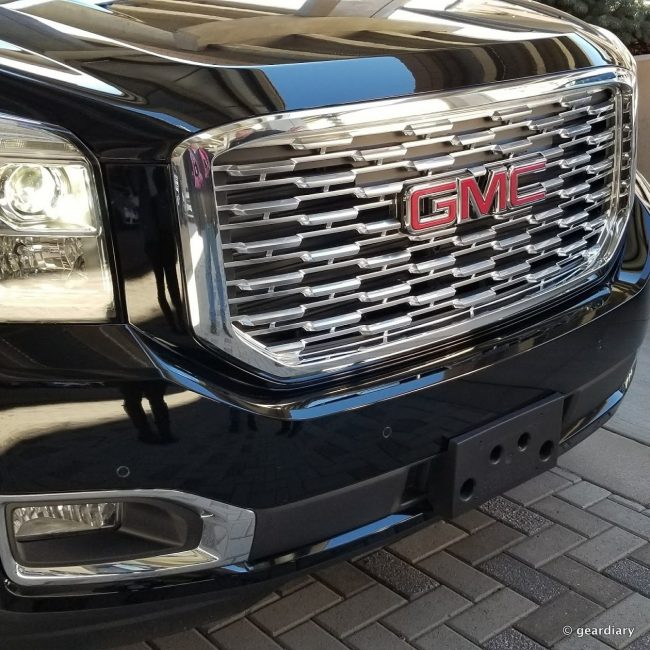 No more honeycomb grill; I’ll miss it, but this one is equally stunning.

You can buy the 2018 Denali in 2WD or 4WD; we’ve always had the 4WD models, so if I were getting a new one, we’d likely stay with that configuration. We’ve never got stuck in ours; that includes driving it extensively through mountainous states and various national parks — on and off-road.

The interior of the GMC Yukon Denali is a combination of spaciousness, luxury, and convenience. Everything the driver might need to see or control is easily within reach or view — either on the wheel, on the dashboard, on the heads-up display (HUD), or in the center dash. Speaking of the center of the dash, there is an 8″ diagonal infotainment system with navigation, Apple CarPlay, and Android Auto capability. I have to admit that I was surprised the infotainment screen wasn’t a bit larger; this is a big vehicle, and the trend in other vehicles I’ve driven (even cars) has been going toward a larger touchscreen. Even so, the screen is big enough to get the job done.

One quibble I had with the navigation system was that it didn’t give me quite enough direction. I suppose that people take issue when their navigatrix is barking orders at them every five seconds, but when I am in an unfamiliar area, I rely on that (sometimes overbearing) guidance. 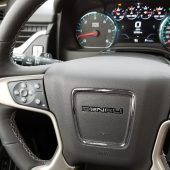 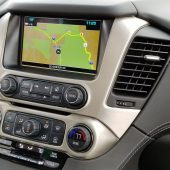 The dash is a combination of leather, matte machined aluminum, and satiny real wood — so no two Denali vehicles will have the same wood grain pattern. The driver’s doors also have real wood trim … 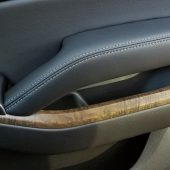 This is a passenger door on GMC Yukon Denali 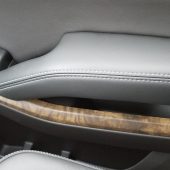 This is a passenger door on the GMC Yukon XL Denali 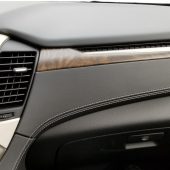 This dash is in the GMC Yukon XL Denali