It has only been a couple of months since OnePlus released the OnePlus 5, and here they are with the newer, larger 5T. The 5T ups the ante by packing in a large 6” phablet size display with thinner bezels.

They’ve moved the fingerprint sensor from the front side of the device to the backside, which is how we prefer it. The new OnePlus 5T is also SUPER slim, with thin bezels. It’s not made of an “exciting” all glass body which has become the hot new flagship trend, but its all-aluminum body feels extremely well made. And despite having a large 6” phablet size display, it’s not at all unwieldy to hold at all.

The full Optic AMOLED FHD+ display packs in a 18:9 aspect ratio with a 2160×1080 resolution and 401 ppi. The display on the OnePlus 5T is large, vibrant with sharp bright visuals and great color reproduction. That said, the resolution is kind of low for such a large display, and it lacks premium features like HDR, but now we’re just nitpicking because even to our critical eyes, it’s a great display. And unlike much of the competition using an OLED display, its colors aren’t oversaturated at all. The OnePlus 5T also comes with a screen calibration tool that lets you tweak its colors if you so choose. But what is especially impressive is just how well it holds up under sunlight, which is something most other OLED phones struggle with. Thanks to adaptive mode, the display automatically recognizes when it’s under bright sunlight and it switches gear into Sunlight Display mode. 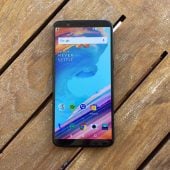 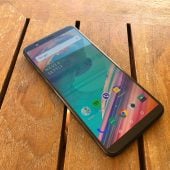 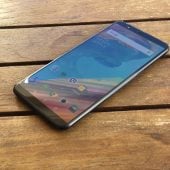 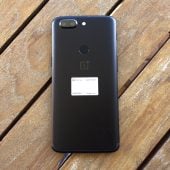 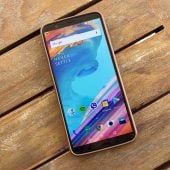 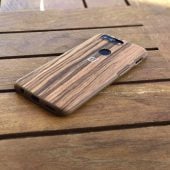 The OnePlus 5T we tested is powered by a Qualcomm Snapdragon 835 and 8GB of RAM running alongside 128GB of storage. Performance on the OnePlus 5T is superb. When it comes to benchmarks, it earned a GeekBench Multi-Score of 6759 and an AnTuTu score of 178934 which indicates that it’s even faster than the Note 8 but slower than the speedster iPhone 8. That makes the OnePlus 5T one of the fastest phones out there, and that is quite incredible when you consider its $499 price point. In general, performance is silky smooth. Face Unlock works lightning fast, heck, the OnePlus 5T is even faster at recognizing your face than the iPhone X.

The 5T comes running Android 7.1.1 with the OxygenOS that has been continually improved based on feedback from OnePlus users. There’s no bloatware nonsense, and instead, you get a pretty clean Android experience which is very close to stock Android but includes welcome additions from OxygenOS, those tweaks include features like Night Mode and Reading Mode, the ability to minimize/hide the Android buttons, and additional uses for the fingerprint reader. New to the 5T is Face Unlock, and Parallel Apps which lets you make a copy of your social media apps (like Facebook, Instagram, LinkedIn, Twitter) so that you can easily separate your business social media accounts from your personal ones. face unlock works superbly, and Parallel Apps is a super useful and welcome feature, and certainly, one that we’d like to see get built into Android altogether. Speaking of Android, OnePlus says an update to Android 8.0 (Oreo) is incoming.

The 16 + 20 MP dual-lens camera on the OnePlus 5T offers solid optics and is definitely an improvement over the OnePlus 5, especially in low light. That said, the camera performs better than the 5 in low light, but it’s not flagship material. In daylight, photos tend to be sharp and pretty colorful.  The camera app does come with premium features like a portrait mode and the app itself is well designed so that even its Pro mode is straightforward to use. But portrait mode itself is not nearly as impressive as it is on the likes of the iPhone X and Note 8.

Battery life on the OnePlus 5T is solid thanks to its 3,300 mAH battery, and it will keep you going through the day with regular use. Unfortunately, the OnePlus 5T doesn’t come with wireless charging, but it comes come with a Dash Charge feature that provides a day’s worth of power from just a half an hour of charging.

The OnePlus 5T comes with a free silicon case in the box, but OnePlus has also come out with a selection of fantastic cases for the 5T that really make the phone pop. These thin cases fit the 5T like a glove but still offer ample protection for the device, including front-facing screen protection thanks to raised edges. The cases come in several finishes, such as carbon fiber and wood, and they really transform the phone into an even more stylish device without making the phone feel bulky. The cases kind of remind us of the style shells for the Moto Z, but these offer much better protection for the phone. We highly recommend these cases to protect and jazz up the OnePlus 5T.

If you already own a OnePlus 5, we’re not sure that there is enough here to justify an upgrade. Regardless, the OnePlus 5T is yet another fabulous phone from OnePlus, with a matching fabulous price.  It’s clear that OnePlus continues to focus on the important things instead of gimmicks – smooth performance, readability under sunlight, face unlock, a thin and ergonomic design – these are all focuses of the OnePlus 5T and they all contribute to making the OnePlus 5T a fantastic phone for the price. It’s no wonder that OnePlus continues to defy the odds and grow such a strong and loyal fan base.

We do wish that its camera had flagship level optics, that would make the OnePlus 5t good enough to topple flagships, but we suppose we can’t have everything at this price. The OnePlus 5T is ultimately one of the best phones of 2017, and that speaks volumes when you consider how many great smartphones were launched this year. If you don’t want to, or just can’t afford to spend money on the likes of a Note 8, Pixel 2, or iPhone X, the OnePlus 5T won’t disappoint you nor your wallet.

What I Like: Dual SIM, super slim design with thin bezels and premium build, excellent performance, phone is easy to hold in one hand, Face unlock is lightning quick, headphone jack, great large display handles well under sunlight, excellent software with no bloatware

What Needs Improvement: No wireless charging, rear camera is not flagship quality, not water resistant at all, no expandable storage