For years, I’ve coveted an original Wurlitzer 200 electric piano. My sonic palate needed that famous chiming tone like it was water. Unfortunately, I never had the extra $2,500 lying around to be able to buy one.

I’ve been through a number of keyboards that all had electric piano sounds meant to mimic it, but they all fell short of the glory of the real thing. 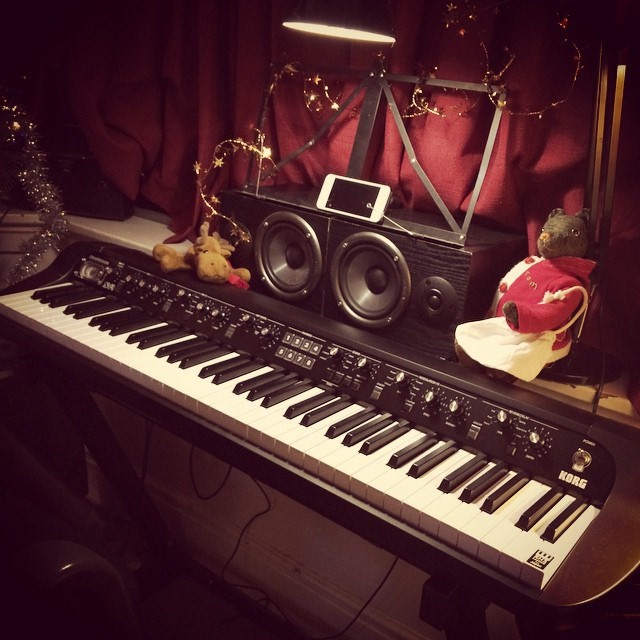 Then, a few years ago, Korg released the SV-1, which claimed to have finally captured the magic of the original instrument.

And friends, the hype is real.

The Korg Stage Vintage SV-1 is a no-frills stage piano. There are six sound banks, each with six sounds of their own. 36 sounds may not seem like a lot to work with, but the SV-1 values quality far above quantity. In these soundbanks, you’ll find the Wurlitzer 200, the Fender Rhodes, the Yamaha CP80, Yamaha and Steinway grand pianos, the Clavichord, the Hammond B3 organ, the Mellotron, and the Oberheim OB-Xa synthesizer, made famous by Van Halen’s “Jump.”

The keyboard has a real vacuum tube circuit (wisely exposed to up the coolness factor) and several built-in effects. There is a master EQ, Pre-amp FX, an amplifier simulator, modulation FX like phasers and obviously a rotary effect, and a reverb/delay section. The reverb is a bit artificial sounding, and even at the highest settings, the delays are pretty subtle. I’ve been compensating by running mine through a rack reverb and delay instead.

The settings are controlled by vintage-style knobs. The Pre FX circuit can be linked to an expression pedal, and the machine is MIDI compatible. There is also an easy-to-use transpose function that can bring the keyboard up or down an entire octave.

There are eight slots to save favorites, but some of the layers that come pre-loaded are as good as anything you could mix up yourself. Personally, I can’t tear myself from the Dyno EP/synth choir layer.

The SV-1 is available in a 76 or 88 key variation. I opted for the 76, which is more keys than the Rhodes or 200 had anyway. The weighted keys are satisfyingly responsive and feel like a real piano. And I’d know—I have a grand piano at my church that I play frequently.

All of this is wrapped up in chic, matte black metal finish, barring the end caps, which feel like an expensive plastic. Amber LEDs light up the display, which makes the instrument look just as vintage as it sounds.

The keyboard has a USB out, which can be used to edit and store sound libraries with the included software. However, the software is almost entirely intuitive. After staring at the screen blankly at the screen for a few minutes, I felt like I needed to be a web developer to understand it.

All I really wanted to do was find a way to add splits or layers, but it doesn’t seem like there is. Which is a real bummer, because some of these Rhodes tones are just begging for a pad to back it up.

I can already hear you. “But how does it sound?”

In a word, magnificent. The sampling job on this keyboard is absolutely next level. The simulated reeds of the Wurlitzer open up with the touch response exactly like the real thing. Whether tickling the highs or pounding on the low notes, the grand pianos have none of the digital flatness that plagues most keyboards.

I’m specifically impressed by the Yamaha CP80 sound. Having owned a CP70, which just has fewer keys, I was amazed to hear how perfectly it captured the instrument’s distinct thunkiness.

The organ sounds are definitely more usable than most keyboards around this price point. The tones are rich and full without being unbearably resonant and accordiony. There are a few settings that are missing for a true organ simulator, so these tones aren’t quite as true as the electric pianos, but they are a ton of fun. Especially the Farfisa, which sounds perfect.

But the most impressive part of this keyboard isn’t the sounds themselves, but the sound of the mechanics. Most of the instruments modeled here are electromechanical, which means there are real hammers and drawbars creating the sounds. These striking implements create subtle sounds themselves, though most digital pianos ignore that little detail.

But with the SV-1, Korg shows how much difference it can make. You can hear the click of the drawbar in the organs and the bounce of the hammers in the electric pianos. You can even hear the damper lifting off of the piano strings when you depress the sustain pedal. You can adjust these levels either from the keyboard itself through a hidden menu, or through the previously mentioned editing software (which remains difficult to use). But, the factory settings are near-perfect analogs, so you might not want to mess with it much.

The Korg SV-1 might not have more sounds than other digital pianos on the market, but the sounds it does have are as close to perfect as you can get without getting the real thing. It’s a joy to play and offers up excellent recreations of rock and roll’s most beloved sounds. And at only $1,550, it’s well worth every penny.

What I Like: Perfect recreations of classic sounds; Plays like a dream; Chassis and display look great