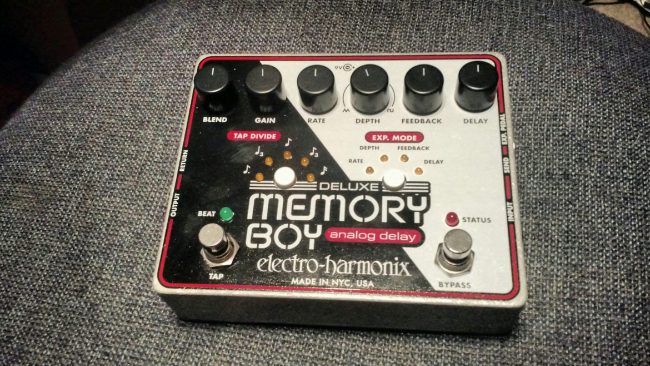 Few effects companies have had a more indelible impact on rock and roll history than Electro-Harmonix. Their effects were instrumental in shaping the sounds of bands like Nirvana, Smashing Pumpkins, and Radiohead. Legend has it that EHX founder Mike Matthews collaborated directly with Jimi Hendrix to create the iconic Big Muff Pi.

Yet for all of their coveted effects, EHX has consistently offered boutique performance for a low price.

And among their enormous catalog of products, I’m not sure if anything is more versatile or usable than the Deluxe Memory Boy.

One of EHX’s most prized products are their analog delays. The company’s legendary Memory Man analog delay was central to U2’s classic sound. The Memory Man was a staple in the Edge’s sonic palate. Radiohead’s Ed O’Brien once said that taking the Memory Man off of his board would feel like losing a part of his soul.

Throughout the company’s history, there have been a number of variations of the Memory Man. The Memory Boy and Memory Toy have long been favorites of players looking to capture that same lush analog delay tone without making as much an impact on their wallets.

But those smaller units have always fallen short of the Memory Man’s functionality.

The Deluxe Memory Boy, on the other hand, outpaces the original easily, and at a fraction of the price.

The Deluxe Memory Boy is far and away one of the most versatile single-use delays I’ve ever played.

The delay is all analog. It uses authentic Bucket Brigade chips, which means each repeat is a copy of the echo in front of it instead of a copy of the original signal. The feedback knob controls the repeats, which can be set to a ringing, ambient chime that self-oscillates without going out of control. Although if you want to run it out of control, it will do that too. And because of the dark, real analog tone, the self-oscillation isn’t harsh like a digital modeler.

The pedal has a maximum delay time of 700ms, which is a huge length for an analog delay. Even the equivalent Deluxe Memory Man only has a max delay time of 550ms. At longer delay times, the effect has a great lo-fi sound.

The old Memory Man was famed for its modulation, which added a chorus-like warmth to its delay sound. The Deluxe Memory Boy increases that functionality with a modulation circuit with separate rate and depth knobs. The rate can be set to a fluid triangle wave or a choppy square wave. The square wave setting makes for some absolutely wild sounds.

The pedal can be used with an expression pedal, which can be set to control nearly every knob on the pedal. You can use the expression pedal to manipulate delay time, modulation rate or time, or feedback, allowing players to bend the delay without taking their hands off of the guitar. Changing delay time while playing changes the pitch of the effect in a beautiful way.

There is also an onboard FX loop. You can route the delay signal through any effect you want, regenerating each time. I’ve had the most fun running it through a pitch shifter to raise each repeat up by an octave for a unique shimmer effect that you can’t get anywhere else.

As if all of these didn’t give you enough power to tweak the pedal to the exact sound you want, there is also a gain knob and a hidden low cut control. As a true analog delay, the pedal’s tone can get pretty dark. The low cut control can lessen some of the bass frequencies to keep the tone from getting too muddy.

All of this would be enough to make the Deluxe Memory Boy one of the most versatile delays on the market. But there’s one feature that makes it absolutely irreplaceable on my board…

For all of its numerous features, the most useful part of the Deluxe Memory Boy is its onboard tap tempo.

While many delays have tap functionality, this pedal has a subdivide button which can modify your tap input into a variety of rhythms. The dotted eighth note delay is one of the most famous conventions in rock and roll, being utilized heavily by Pink Floyd, Stevie Nicks, and U2. But most delays don’t make it easy. You need a fraction calculator to figure out the tempo of each repeat and input it manually. Even the Line 6 DL4, the ubiquitous green machine, doesn’t offer a simple way to set a dotted eighth note.

But with the push of a button, the Deluxe Memory Boy can divide your input tempo into a dotted eighth, triplet quarter note, eighth note, triplet eighth note, or a sixteenth note. No mental gymnastics—just a perfect rhythmic delay every time.

With this wealth of functionality, you might expect the Deluxe Memory Boy to carry a hefty price tag. Delays with these many features often sell for $300 or more. But this pedal sells for half of that. Used Deluxe Memory Boys often show up online for around $120. And for a workhorse like this, that’s an absolute steal.

The Deluxe Memory Boy retails for $168 and it is available on Sweetwater.com or any other music retailer.

What I Like: unparalleled functionality, endless versatility, solid construction.

What Needs Improvement: honestly, nothing. This delay delivers on all fronts.