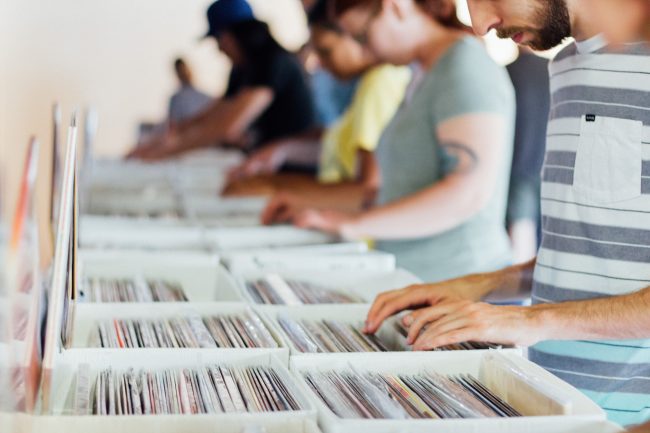 This past Saturday, music junkies across the world gathered together to celebrate Record Store Day. Excitement had been growing across the internet for weeks. Several of the vinyl collecting forums had been buzzing with hype over some of the RSD exclusives that they were eyeing. My local shops posted pictures of their shipments a few days ahead of time.

The morning of, eager collectors lined up outside shops hours ahead of time.

And I was not among them.

While Record Store Day was originally intended to celebrate independent record stores, it has grown into something else entirely. Major labels saw the day as an opportunity to release overhyped limited pressings. Often, the shops themselves have little say in what pressings they can get. A couple of years ago, I was talking with one owner, who said he wasn’t allowed to purchase the most in-demand releases unless he also ordered some duds (last time I checked, he was still trying to get rid of some of those records). The year before, he actually lost money on the exclusives.

But there’s a bigger problem with these exclusives: flippers. They never darken the doors of a record store outside of Record Store Day. But when the day comes, they swoop down like vultures to pick through the exclusive releases and rush to the internet to make a profit. For example, this Sigur Rós record, available for any superfans willing to spend over $100 for experimental ambient music. Mind you, that record isn’t even made up of actual songs.

Inflated demand, limited supplies, and bitterness toward flippers has transformed Record Store Day from the grassroots celebration it started out as and turned it into a hectic, macabre scene.

As the day wore on, news started coming in across different collecting groups. Many people were too late to get the records they wanted. One person recounted the scene at his store: customers literally ran through the store, pushing each other, and snatching records out of each other’s hands. And while that scene might not be out-of-place at Walmart on a Black Friday as people fight over flatscreen TVs, I don’t think anyone wants to see their record stores devolve into such chaos.

Personally, it’s been several years since I’ve cared a lick about the Record Store Exclusives. I have little interest in taking part in an opportunistic feeding frenzy that does little to help the independent record stores it claims to support.

Instead, you’ll find me there in the offseason, digging through the crates of used stock. You’ll find me ordering new records directly from my neighborhood record store instead of scrounging the internet for the lowest prices. It might cost a little extra, but I look at the difference in price as a donation to keep my local shop going.

And if we really want to support independent record stores, we need to do that more often than twice a year when the major labels drop a new color variant of a record you can easily find elsewhere. We need to step into those stores when it’s easier to just add an item to our Amazon cart. Because these stores exist outside of Record Store Day, so let’s remember them year-round.