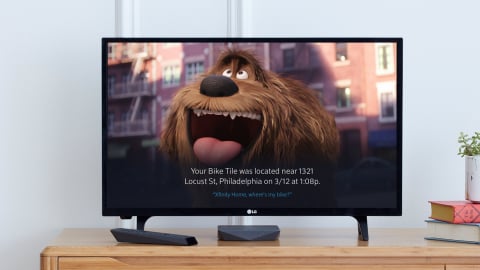 I love visiting my parents’ house. Mostly because they live by the beach, but also because they have Xfinity, and Comcast has the world’s coolest remote controls. Seriously, nothing feels more “Jetsons” than talking to the cable remote. Comcast is taking it even further with Tile integration, so your TV can show you where you left your keys!

According to the press release, all it will take is asking the remote where the Tile-enabled item is, and the last known address pops up on the TV. This is the sort of “smart home” stuff that consumers can actually use; everyone has that “oh crap” moment where they’ve misplaced their keys, backpack, shoes, hat, wallet, etc. If it has a Tile, Xfinity Home will find it. Unfortunately, I don’t think Tile makes devices for socks yet, so those mysteriously unpaired socks floating around the laundry room still have no mates. Sorry.

For anyone not familiar with Tile, it is a small Bluetooth enabled square you can attach to your keys, a bag, or any other small portable item. If you misplace the Tile’d stuff, you can use the app to track where you last left it, as well as set off a high-pitched tone through the app if you know your car keys are nearby but can’t find them because they’re in a bag of giveaway items in the basement, thus saving you the trouble of replacing those keys only to find them three years after you last owned the car. Hypothetically, of course. We reviewed Tile when they first debuted and they’ve been a perennial favorite of the Gear Diary team ever since.

Right now this service is tied to being an Xfinity Home user with the X1 voice remote, so you need to be both a cable customer and a user of the Xfinity home security system offerings. They do plan to expand it to internet users as well, but it makes sense to first tie it into their cable and alarm customers. If you’re already comfortable using Xfinity for other parts of home security, tying it in with Tile is a natural choice. Also, for what it’s worth, my parents use Xfinity Home and seem to love it. They have their share of grumbles about customer service at times, and there have been a few mysterious internet issues over the years, but my parents are fairly normal technology users; they own iPhones and an Apple TV, but they’re not exactly seeking the cutting edge. If I handed them a pack of Tiles, they’d politely thank me and then stick them in a drawer. On the other hand, if Xfinity handed them a pack of Tiles, they’d likely enthusiastically embrace it. It’s a lot easier to get people to be willing to adapt to the idea of a small tracker if it ties into a larger system they are already using.

So if you’re an Xfinity X1 user, next time your better half is running around screaming about missing keys, you can look super cool asking the remote control where they are!