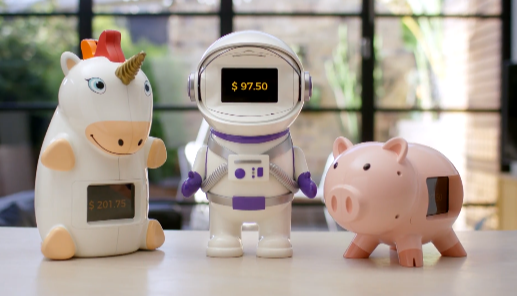 There is a seemingly endless list of things to teach your kids as they go through life, such as how to show kindness to others, why it’s necessary to have discipline while tackling boring tasks and of course, how to be responsible with money.

People have had piggy banks for generations to help with the last necessity.

Modern piggy banks are substantially more high-tech than the ones you might remember. The collection of GoSave Smart Piggy Banks even lets you pay kids electronically from an app.

There are three possible design choices from the GoSave brand so far. If you prefer taking the most traditional approach, pick Penny The Pig. There’s also Astro the Astronaut — the first design released — and Uma the Unicorn.

Pay Your Kids From an App

Each bank from GoSave has a touchscreen on the side. Think of it as a feature similar to the slot at the top of a piggy bank where people inserted folded bills or coins. Kids watch their savings grow on the screen when you add more money with the GoSave app.

Set up a reoccurring or one-time allowance by using the app, too. The convenience of the app lets technology lend a helping hand instead of making you remember to give kids their allowances while standing face to face with them.

One of the reasons many parents start early when teaching their kids about money is they don’t want them to get the idea that they get money whenever they want. They have to earn it.

Building a strong foundational understanding about earning when they’re young increases financial literacy kids can use later. A GoSave Smart Piggy Bank is best for kids from age 3-12. It won’t be long before they have to make decisions, such as how to open a bank account before starting their first summer jobs, after all.

The GoSave app lets you assign chores to kids in seconds, although it’s not necessary to give an earnings amount to every task. That efficient option helps you ensure kids pitch in enough around the house to justify getting an allowance.

Approve When Your Kids Make Withdrawals

You’re probably fairly involved in helping the young people in your household show the same responsibility with buying things as they do when saving money.

For example, if they want to splurge on a toy you know they probably won’t play with for more than a week, you might urge them to buy something that provides more long-lasting enjoyment.

However, there are some cases where you can’t oversee your kids’ spending habits in person. The GoSave app lets you monitor spending requests from afar and make approvals from your smartphone. Kids first make a withdrawal request using the touchscreen on the bank. Then, you’ll see it come through and make arrangements to give them the money through your preferred method.

Let Relatives Contribute Money From Around the World

Maybe your family lives on the East Coast of the United States, but your child’s grandma lives in Los Angeles, and their favorite uncle spends most of his time in Ireland.

Relatives inevitably ask kids what they want for their birthdays, Christmas or Hanukkah, and children often mention money as their preference because it gives them the most freedom to buy things. Once relatives download the GoSave app, they can send money to your child’s GoSave bank, along with personalized messages.

How Can You Buy One?

There is an active Kickstarter campaign for GoSave Smart Piggy Banks through June 10, 2018. Visit the page and click on Back This Project. Keep in mind that the project has already met its pledge goal, so there is no danger of a failed fundraising effort.

The amounts listed on the website are in Australian dollars, with an estimated conversion to U.S. dollars — or any other currency you select from the menu on the Kickstarter page footer.

For example, any of the three piggy banks mentioned above is $99 AU or about $75 USD. Deliveries begin in October 2018 if all goes as expected, and the products ship anywhere in the world.

The ability to save money instead of immediately spending it is undoubtedly a valuable trait that helps people maintain stability during unexpected circumstances. GoSave Smart Piggy Banks are a great way to assist your kids with managing their money wisely, establishing habits that will benefit them for the rest of their lives.