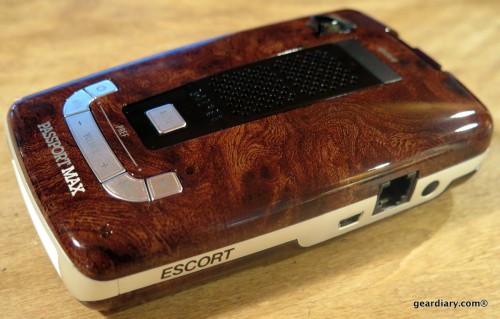 Dan reviewed the Escort Passport Max not too long ago, and his conclusion was that it gave “far fewer false alerts than any other radar detector [he had] used.” That’s one of several reasons I had stopped using radar detectors years ago, but recently I’ve revisited this old-school solution because of several new features.

On New Years Day, I got pulled over for speeding. I was on my way to meet mom for dinner; the eight-lane road was just about empty, and although I was paying attention to what was in front of and around me, I was distracted enough that I didn’t realize I was going ten miles over the speed limit until I saw the flashing lights. Yes, I got pulled over, and while I fully expected a ticket (and I was already trying to figure out when I’d be able to fit in a Defensive Driving course), the policeman was kind enough to give me a warning.

But that wasn’t enough to make me think that I might benefit from a radar detector.

Late last year I started driving to Abilene, a town about 130 miles away, a couple of times a month. There has been quite a bit of construction done along this relatively rural route, and I’ve really had to pay attention to where the road work zones start and end as well as my speed inside those zones since traffic fines are doubled there. I know that I have been guilty of being a bit too speedy along that route at times.

Obviously, this is something I need to work on.

While at CES, Dan and I stopped by the Escort booth, and we had a chance to look at their new styles. I was slightly tickled that the size of radar detectors hadn’t gotten much smaller than they were back when I used one, but I’ll admit that I was blown away by the difference between the technology in the boxy Escort radar detector I owned back in the late 80s and the smaller yet still very industrial looking passport I’d owned in the 90s.

Unlike those radar detectors back in the day, which could only beep out progressively urgent warnings when the area I was driving through was being targeted by a radar-enabled policeman … or when someone else with a radar detector was driving by me, or when I drove by a supermarket with an automatic door, these new devices were made to “identify real threats faster and more accurately than any other detector” without going off constantly due to false-positives.

In the old days, even the best radar detectors would go off so often that they were like the proverbial boy who cried wolf. I had to become an expert on which lights and sounds were important versus unimportant, which areas were going to set a detector off no matter what, and even then there was a chance I’d get it wrong and end up with the dreaded urgent alarm sound that meant I was being focussed on exclusively.  :shudder:

It got to where I decided it was easier and less distracting to not use any radar detector than it was to use one.

When coupled with the optional SmartCord Live, the new Escort Passport Max uses “AutoLearn technology with the power of GPS and the exact frequency to learn and automatically reject unwanted door openers and other fixed position false alarms.” But that’s not all.

The Passport Max comes pre-loaded with Escort’s Defender Database of “active red light and speed camera locations throughout North America. As you approach these locations, the MAX will alert you in advance.” Through the use of the Escort Live iPhone or Android app, it is also possible to add your own hot spots to the database with the “mark location” feature, so it is definitely a personalized and always learning experience.

What I like most, and as silly as it may seem, is that using the Escort Passport Max doesn’t mean that you’ll have to rely on a series of LEDs or anything technical to understand what’s happening. The detector will give you simple vocal alerts; when the Passport Max realizes you are speeding, it will tell you to stop being an idiot and SLOW DOWN! That reminder to watch my speed is exactly what I needed when I was zooming along to see my mom on New Years Day, and that’s what I also need when I’m driving to Abilene, San Angelo, or anywhere else, really.

Sure, it’s great that the Passport Max will let me know when I am being targeted by a radar gun, but this radar detector also keeps me safe and focused by vocally reminding me when I am going too fast. It’s like having a concerned friend riding in the seat next to me.

To get this kind of speed protection isn’t cheap; the Escort Passport Max Radar detector has an MSRP of $549.95, while the limited edition versions are $599.90. Adding the Escort SmartCord Live is an additional $99.95 if purchased with a radar detector, or it is $149.95 when purchased separately, plus you have to add in either $4.99 per month or $49.99 per year for the . But having the Escort Passport Max constantly monitoring my speed and what’s going on around me affords peace of mind that I won’t get distracted and forgetful while driving.

Now I just have to remember to remove it every time I exit my vehicle, as I am sure that radar detectors are just as popular items to steal now as they used to be. =P