I love reviewing items that offer a different take on known products. That’s what caught my eye when I saw the JBL Soundgear wearable speaker. Rather than wearing earbuds that isolate you, Soundgear surrounds your head with excellent audio. At $200 they are pricey. At $99.99, the Zulu Alpha Portable Bluetooth Speakers take a similar approach for half the price. 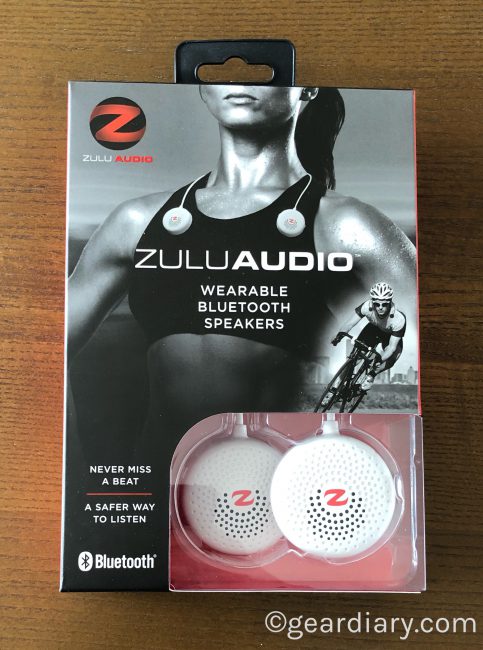 The Soundgear is a rigid U-shaped series of speakers that go around your neck and sit on your shoulders. It is an odd sensation the first time you put it on but the sound coming from it quickly wins over critics. It is great if you are out for a walk or doing some work in the yard, but the fairly significant heft and the fact that it is only held in place by gravity make it a poor choice if you are doing anything more active. Thanks to their design, and the use of magnets, the Zulu Alpha Portable Bluetooth Speakers solve that issue. No matter how active you are, they stay in place. That’s a good thing… but I’m getting ahead of myself. The Zulu Alpha Portable Bluetooth Speakers are essentially two small speakers connected by a cable. There is a left channel, and a right channel and both are controlled by buttons on one of the two speakers. 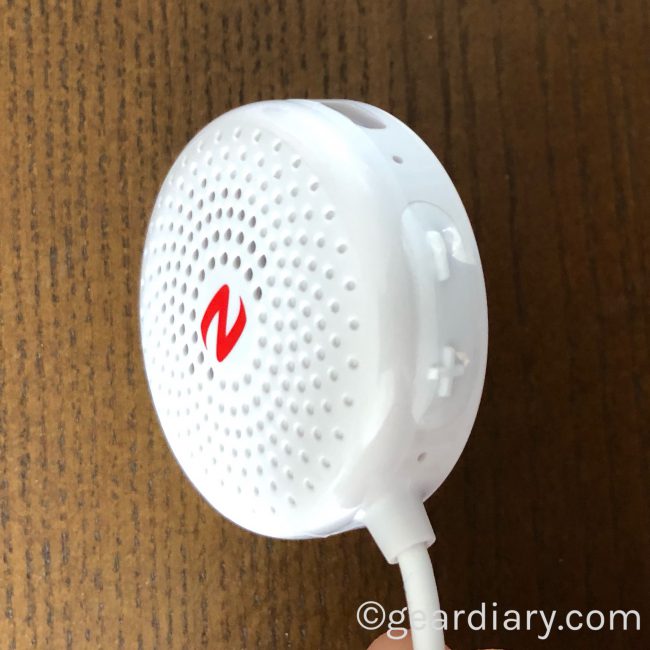 There is a micro USB charging port hidden, a power on/off button that also serves to pause audio, and volume controls. Between the USB port and the volume controls, there is a small hole for the microphone. Yes, you can use these speakers for calls as well as music.

Available in either black or white, the speakers are small and measure just 1.83” by .75” by 1.83”. They weigh a mere 75 grams. The built-in battery delivers up to four hours of playback time and takes about 2 1/2 hours to charge. That might not seem like enough but keep in mind the fact that these are intended for your next run or bike ride and are not targeted at people who need “all day” audio. The speakers carry an IPX4 rating, so they are splash resistant. You won’t want to use them in a major downpour, but the IPX rating does mean you won’t have a problem if you are out and about and the skies open for a time. 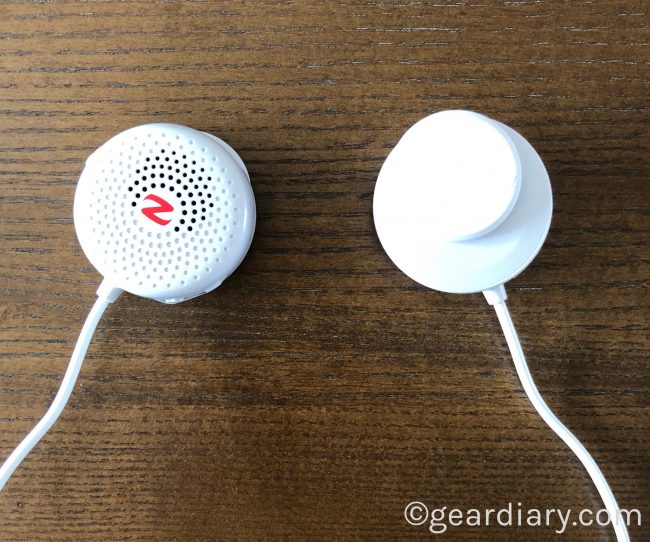 The back of each Zulu Alpha Portable Bluetooth Speaker is magnetized. 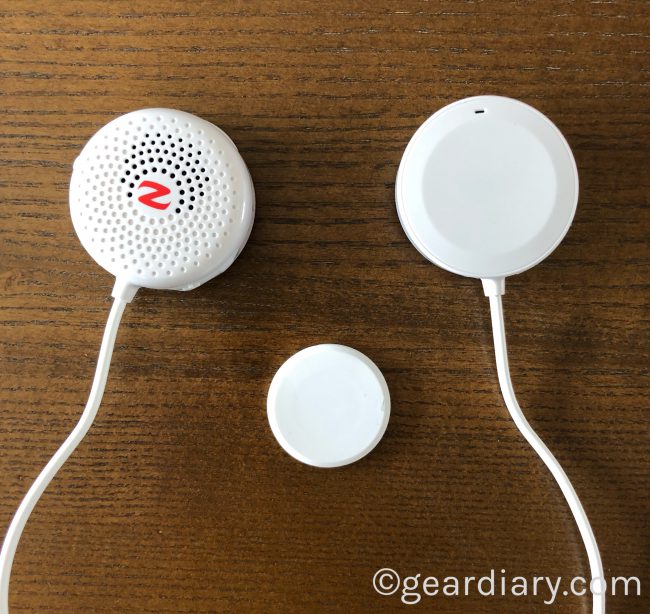 The company includes three round disks, one for use with each of the two speakers and a third for when you lose one of the two. The magnets built into the device are strong enough to create a solid bond between the back of each speaker and the round disks. 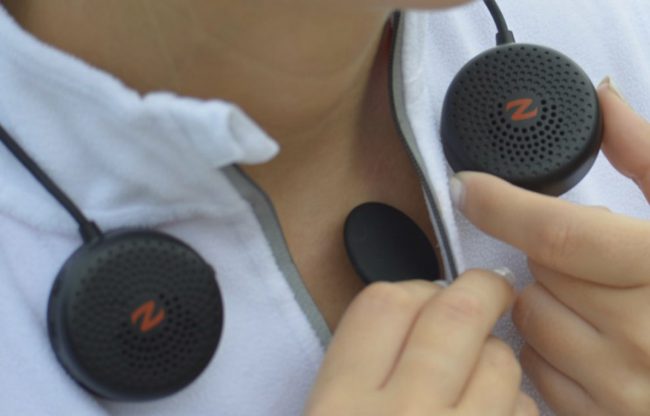 The idea behind the design is simple. You separate the disk from the speaker, place the disk inside your shirt or jacket and then place the speaker over the location where the disk is but on the other side of your clothing. 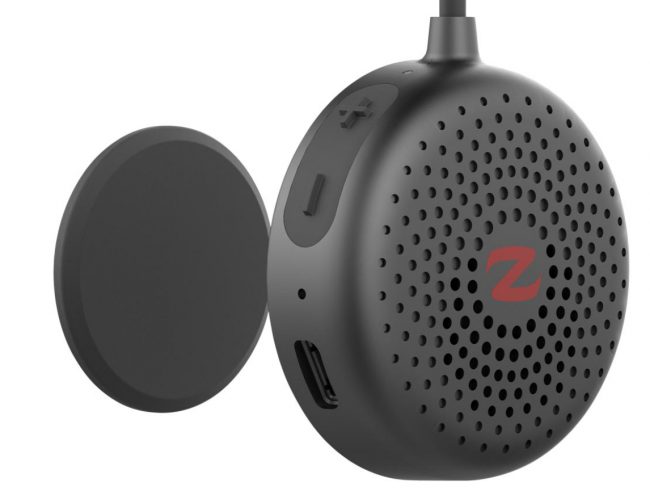 The magnets are strong enough that, even with fairly thick clothing, they connect and stay in place. 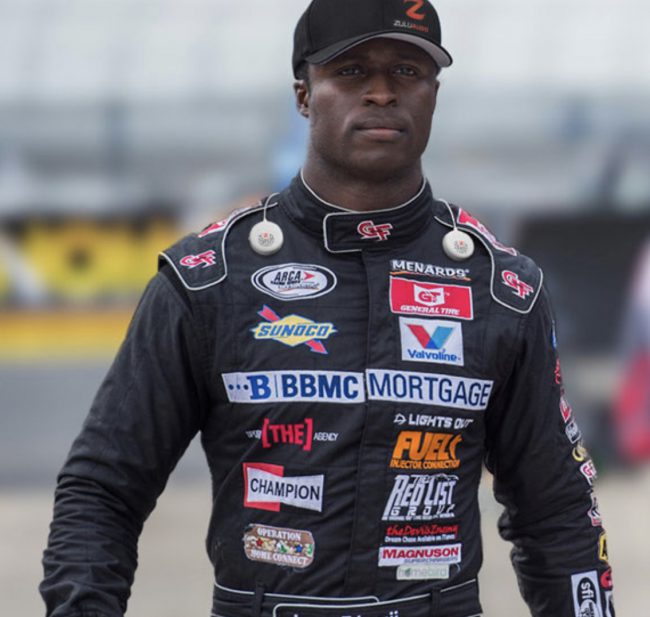 Then, once both speakers are in place, you can adjust the location to find the spot that is most comfortable and, of course, delivers the best sound. The magnets are strong and, no matter how much I jumped around, they didn’t shift position at all. 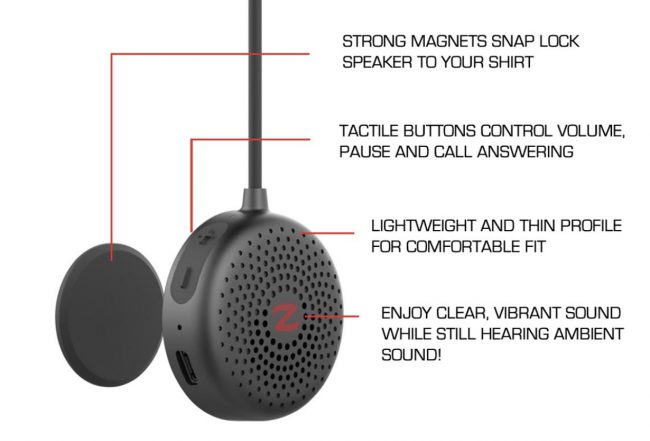 When you are done using the speakers, you simply grab both the speaker and the disk and pull them apart. The design works well, and I found it easy to put the speakers on and take them off. 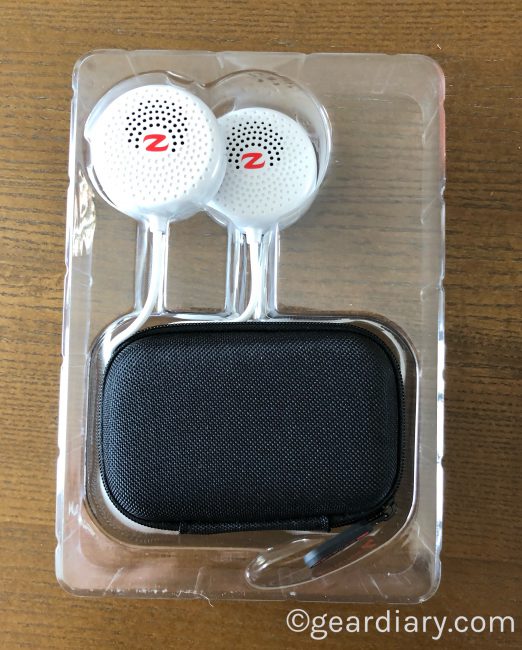 The company has this to say:

Safe, convenient, comfortable audio for people on the move. The perfect audio solution while you run, ride, work, or if you just don’t like headphones. Earbuds are uncomfortable and can put you in danger by eliminating surrounding sounds. Larger speakers are cumbersome to carry from place to place. The Zulu Alpha Portable Bluetooth Speakers are the perfect medium. Small and lightweight, they stay attached to your body using magnets that clip to your clothing. Bluetooth capable, will pair to any Bluetooth enabled device. Built-in USB rechargeable lithium-ion battery. Zulu Audio, liberate your ears.

All that I’ve written thus far would suggest that this is a product worthy of our top Gear Diary recommendation. Sadly, that is not the case. I’m not a fan and, while I can see a use for these, I think they could easily take a rather smart design and, with a few changes, deliver a product I can recommend. 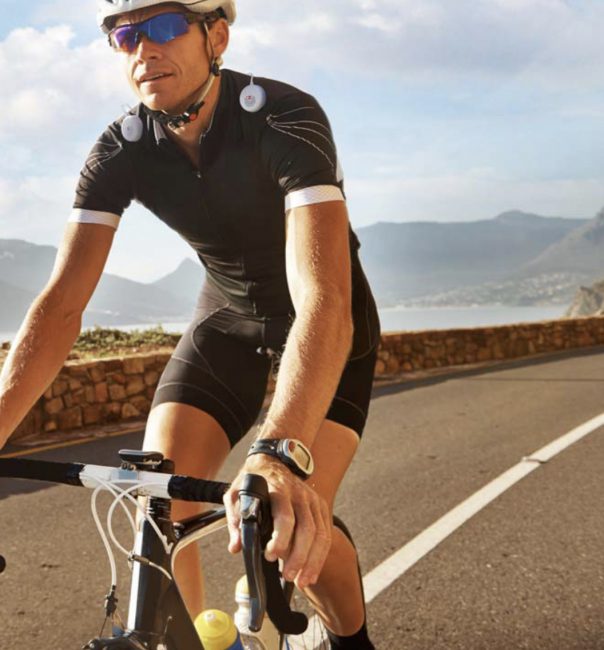 Let’s start with the positive aspect of the Zulu Alpha Portable Bluetooth Speakers.

As noted, the design is quite smart. The can be placed pretty much anywhere on your clothing, and they stay put. Removing them is just as easy. The result is speakers that let you listen to music hands-free. More importantly, they make it far safer to listen to music while out biking or jogging. Traditional Bluetooth earphones sit in or on your ears and block out sound. That’s okay at home but not ideal when you are out, and there are cars and trucks flying by. It just isn’t safe. With this product, your ears aren’t blocked so you can hear approaching traffic. That’s a big deal.

Which leads us to the issues I have with this product.

The first issue I have is the same one I had with the JBL Soundgear. The trade-off for not blocking your ears is the fact that the sound goes everywhere. That’s fine at home but potentially disturbing if you are out in public. (Think about the last time you were on a train or bus and the person five rows up was blasting music or video from his/her phone. It is annoying and rude.

The bigger issue, however, is the sound. I could almost forgive the “share your music with everyone around you” issue with the JBL Soundgear since it puts out fantastic audio. It is simply a pleasure to listen to music with it. That’s not the case with this product. The small speakers may get louder than the speaker on your phone, but they certainly don’t sound better. The audio is thin, lacks bass and, if I’m totally honest, after a few minutes using it I realized I would prefer silence over whatever was coming out of the Zulu Alpha. As someone who truly loves music this product simply doesn’t hit the mark.

So, from a design perspective, these are brilliant. From an audio perspective, however, it is another story, and I would love to see the company up the audio game in the next version of this. 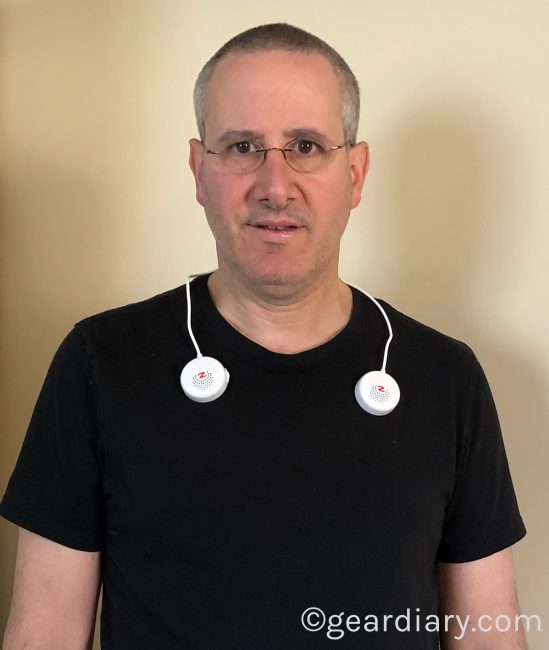 I feel bad knocking the Zulu Alpha speakers. Sure, if someone is desperate for audio while heading out for a bike ride and doesn’t want to shut out the world they might be great but for anyone who values their music, they just don’t cut it and, for $100, they should sound a hell of a lot better than they do. While I was testing them this morning, Raina asked me to turn them off or go into another room. There is a use-case for the product as it currently stands… but it sure ain’t me. Learn more here.

What I Like: Smart design; Magnets hold the speakers securely no matter how much you move; Include extra magnetic disk; Include carrying case

What Needs Improvement: The sound