If you are looking for an all in one product that not only pressure cooks but can steam or air fry as well, you should check out the Ninja Foodi Deluxe Pressure Cooker. 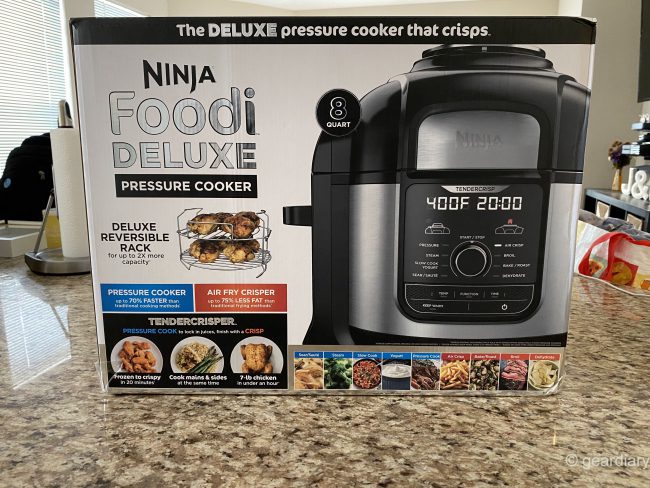 I’ve been using my Ninja Foodi Deluxe Pressure cooker for the past month here and there, and while I haven’t had much time to spend with it but the foods that I’ve had the chance to make in the short timeframe I’ve had it have been absolutely delicious. 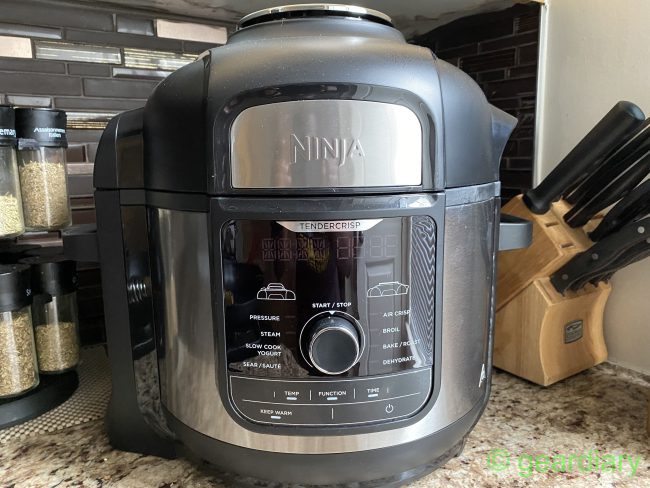 Combining the elements of a pressure cooker combined with slow cooking functions of an instant pot all the while also having the availability of an air fryer makes this the product to make room on your countertop. I received the Foodi Deluxe 8-Quarter version which is more than enough to hold a 7lb. Chicken, but what’s more is great if you intend on feeding a family. While it’s just Jess and me here at home, the Foodi Deluxe will come in handy especially around the holidays when it’s time to sear veggies, bake, broil, steam, or slow cook in an all-in-one solution which surely would eliminate dirty dish build-up in your sink. All of the internals are dishwasher safe, including: 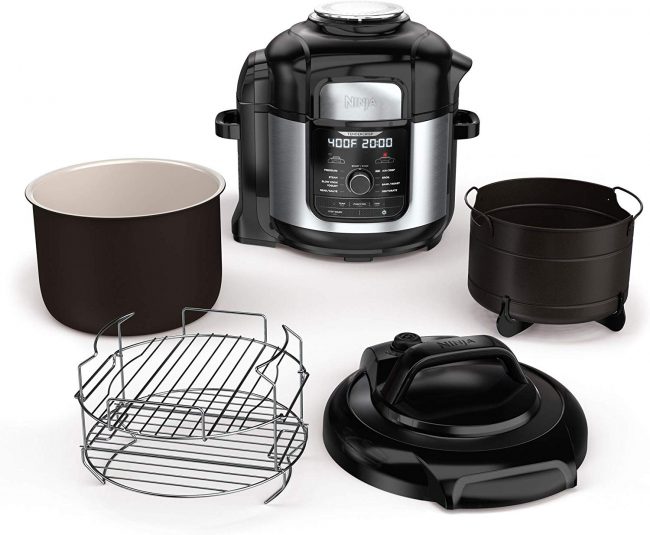 I’ve cooked quite a few meals from air fried chicken wings, searing my steaks, and even managed to sauté my veggies without them getting overly charred like they would using a typical pan. I’ve heard of people using their Ninja Foodi pressure cookers to create yogurt; I’ve yet to try that, though. 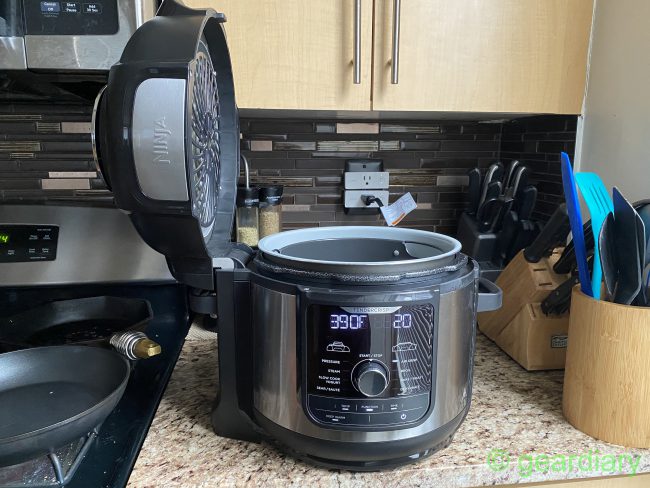 With the TenderCrisp technology, you can pressure cook your ingredients to lock in the juices, all while giving them a crispy golden air-fryer finish. This is great for chicken wings, which in every other Air Fryer I’ve tried out dries out the meat, and almost scorches the skin of the chicken which isn’t appetizing. 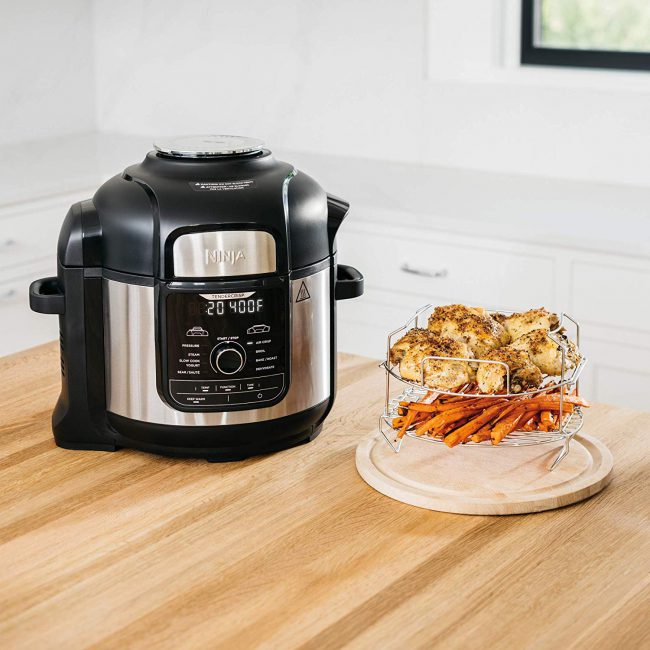 The first thing I attempted to cook, knowing that it’s Thanksgiving soon, was to just start basic with air frying chicken breast, which is something that I tend to eat possibly three nights a week. I occasionally meal prep these days, but I hate having to have the same meals consistently throughout the week, and the Foodi Deluxe allows me the versatility to take foods I enjoy and make them available to me in mere minutes. 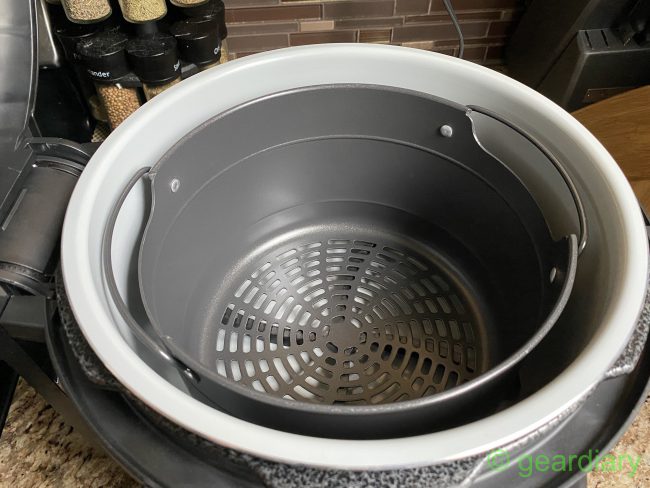 Being able to take my foods from Frozen to fully cooked with the Ninja Foodi took some getting used to, however. With my chicken breast, it took me three total attempts to get things how I liked. Unlike the Ninja Foodi Grill which includes a thermometer, you’re left to your own devices with the Foodi Deluxe; an LED screen allows you to see when foods have cooked, but you don’t have the luxury of being able to tell when meats have cooked all the way through. Specifically with my larger cuts meat like a NY Strip Steak, rather than opting for a pan sear, I would cook the steak til medium rare in the oven, before moving it to the Foodi Deluxe to get a completely even sear. This works best for me but could vary for you. 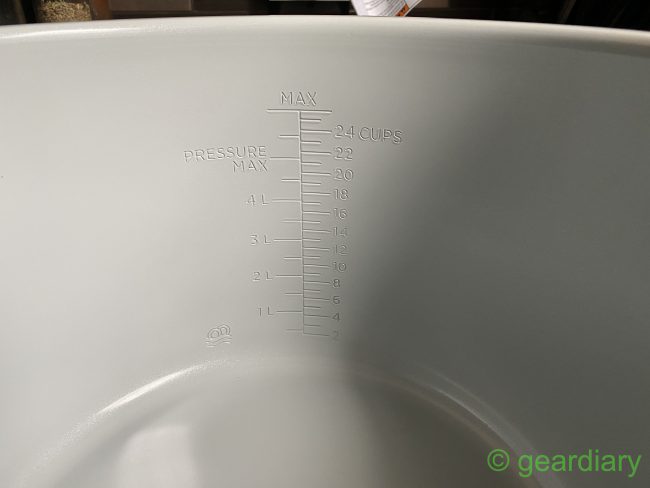 Concerning other meat like pork chops or even chicken tenders, what I’ve done is I’ve put my chicken breast on the lowest position for an auto cook at about 390 degrees for roughly 20 to 25 minutes, flipping it halfway through to make sure that the meat is completely cooked. Halfway through the cook, that’s typically when I can add things like garlic and herb seasonings to make sure that it’s how I like it. I’ve also learned that using this method eliminates the amount of foods sticking to the included Cook & Crisp Basket, allowing me to hand wash that and the alternating Pressure/Crisping lids versus adding them to the dishwasher (although you can go that route if you deem fit.)

The cookbook while helpful, I felt as though some of the foods lacked a little bit of taste. So I added and tweak things and make sure that it was something that my household would like, and so far so good. Granted, I’ve only had my Foodi Deluxe for a month, so I haven’t been able to test out things such as a turkey, but that’s coming up soon and I cannot wait to test out.

The Ninja Foodi has a pretty nice display window that shows you what’s going to go into your pot as well as the cooking times that takes tolls on when you’re cooking your meat. It gives you alerts for when you need to open and shut the lid as well as LED lights that rotate to show you that your items are either pressurizing or if they stopped rotating when it’s reached depression. 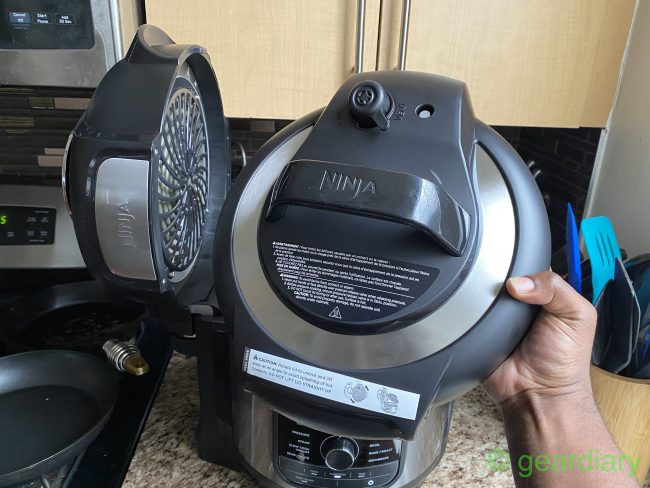 For me, pressure cooking is great for things such as rice and even for my chili which I’ll be making soon. There’s also a cooking crisp basket that has a reversible rack that comes included with the Deluxe. I feel like I use this more so on my meats than anything else as well as roasted my veggies which I think is a huge help. One caveat is that I have to clean between meals so I usually start with my veggies or my rice. I clean out my pot, and then I go to cook my meats. 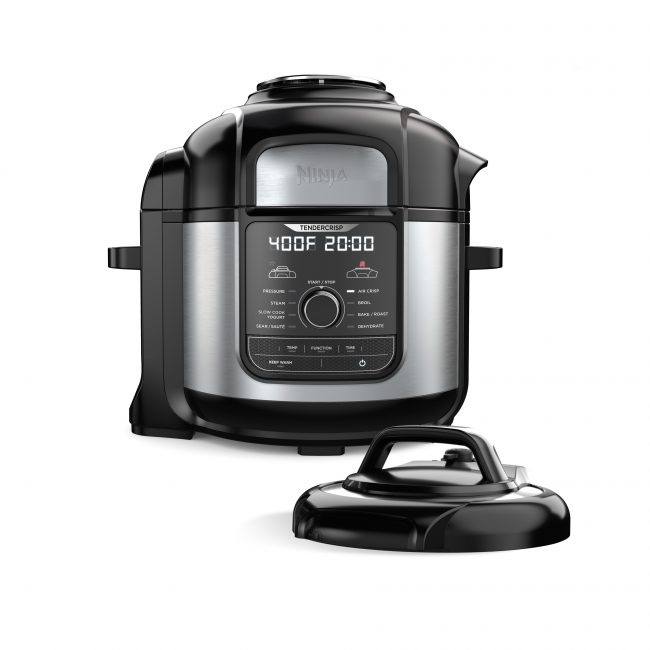 Living in an apartment, my counter space is very limited. So the Ninja Foodi Deluxe has helped me eliminate a lot of extra accessories that I would use previously that I don’t have to use anymore. At $279 it’s certainly not the cheapest product on the market, but it does everything you’d potentially have 5-6 products crowding the top of your fridge or under your cabinet do, in an all-in-one approach that looks better, and is better in practice.

For more information on the Ninja Foodi Deluxe, head over to Ninja’s site today.

What I Like: A do-all product that doesn’t take up much countertop space; Will also serve as a substitute for stovetop cooking for a lot of family meals