In a stark reminder that we are in the middle of a global pandemic with travel bans and stay-at-home orders in full effect, the highly anticipated OnePlus 8 flagship series was finally formally announced this morning via a YouTube live stream. 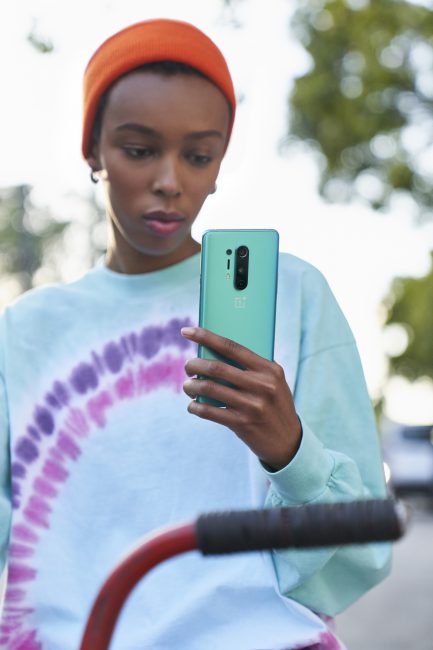 The OnePlus 8 Pro in Glacial Green.

The OnePlus 8 series will feature two 5G-ready models, the OnePlus 8 and the OnePlus 8 Pro. The OnePlus 8 Pro will appeal to those who prefer an ultra-premium flagship phone that has all of the bells and whistles including a larger display with a fast refresh rate, a top of the line processor, water and dust resistance, long-lasting battery life, and an excellent camera. The OnePlus 8 will entice people who’ve been waiting for a compact premium smartphone that won’t make them trade the flagship features they want for pocketability. 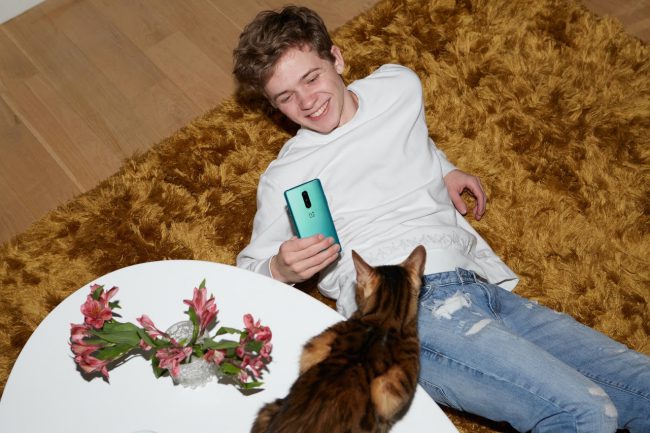 The OnePlus 8 in Glacial Green.

Let’s take a look at each device …

Green is my favorite color, but that blue is speaking my language!

The OnePlus 8 Pro is the company’s most feature-rich phone to date. It has a 6.78” (3168×1440) QHD+ Fluid 3D Corning Gorilla Glass Display with a 120Hz refresh rate and 1300 nits at peak brightness. A 3.8mm punch-hole on the upper left side of the display houses the front-facing 16-megapixel camera; it’s so tiny, OnePlus hopes that you’ll hardly notice it.

It was also pointed out during the livestream that on average, most of us touch, swipe, look at or otherwise feel our phone’s display 2,000 times a day, so it needs to be good; as Ryan Fenwick, head of corporate PR at OnePlus pointed out, the OnePlus 8 Pro has the “highest spec’d display in the universe, or at least on Planet Earth.” DisplayMate seems to agree with him; they gave the OnePlus 8 Pro their highest ever Display Performance Grade of A+.” 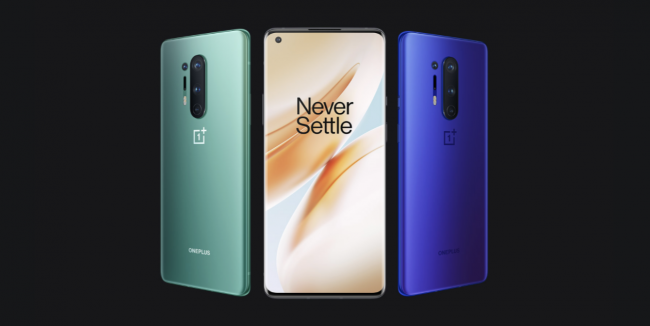 For many of us, a smartphone’s camera is its most important feature. I’ll reserve judgment on how great the camera is until I have actually had some time with my review sample, but the specs are promising. The OnePlus 8 Pro has the biggest camera upgrade that the company has ever delivered in one of its phones. On its back, a vertical camera array holds the main 48-megapixel camera (Sony IMX689 sensor which is great for clear photos in poor light), a 48-megapixel ultra-wide lens with a 120º field of view, a telephoto lens with 3x hybrid and 30x digital zoom, and a “unique color filter camera that allows you to express the artist within through lighting effects and filters.”

The OnePlus 8 Pro’s main camera can shoot 4K, and it has hybrid video stabilization (combining Optical Image Stabilization (OIS) and Electronic Image Stabilization(EIS)); there are three hybrid microphones to collect clear stereo audio. Other video recording features include audio zoom —which lets you zoom in on the sounds you want to magnify, and there is an audio windscreen on the mics which automatically cuts wind sounds when you are recording. Since good lighting can be such a challenge when shooting video, the 8 Pro has 3-HDR Technology which weaves together three exposures into one frame with a higher dynamic range; this fills in shadows for clearer, more colorful details — with it, you can shoot video with a clear face and a clear background at the same time.

OnePlus didn’t drop the ball on processing power, either. The OnePlus 8 and the OnePlus 8 Pro both have the Qualcomm Snapdragon 865 with the Snapdragon X55 5G Modem-RF System; this gives them both multi-gigabit 5G connectivity, advanced Wi-Fi 6 performance, “professional-quality photography at Gigapixel speeds, desktop-level gaming with ultra-realistic graphics, and intuitive AI experiences.” 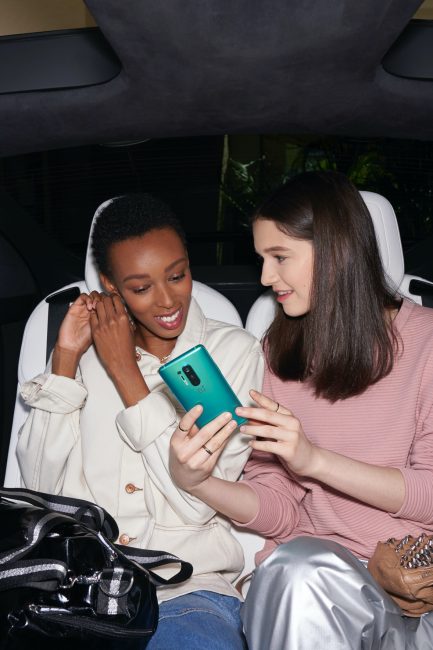 The 8 Pro has a 4,510mAh battery that supports Warp 30T charging which can take the phone from 0-50% power in 30 minutes. On top of all the other features I’ve mentioned, there are two that set this particular OnePlus apart from any model that came before it: the first is that it supports Warp Charge 30 Wireless, which — as you guessed it — means wireless charging has finally made its way to OnePlus — along with reverse wireless charging for your small wireless charging capable accessories. But even better? The OnePlus 8 Pro is now IP68 rated, so you no longer have to worry about your phone getting wet when you’re soaking in the hot tub after a grueling day of Zoom.

The OnePlus 8 Pro measures 6.5″ tall by 2.9″ wide by 0.33″ thick, and it weighs 7 ounces. It will be available in sleek Onyx Black or in a silky, matte-frosted Ultramarine Blue or Glacial Green. You can get the 8 Pro with up to 12GB RAM and up to 256GB user memory. You can see the full list of OnePlus 8 Pro specifications here. 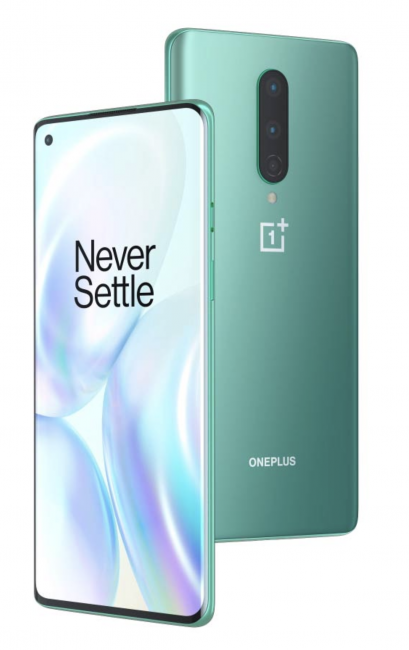 If you prefer something a bit smaller in your hand, the OnePlus 8 may be just the ticket; Ryan Fenwick pointed out that the OnePlus 8 is “the very best of OnePlus design, distilled into a beautiful, smaller form factor.” For years, OnePlus has heard from their community that they wanted a smaller phone, “a true flagship that’s just a bit easier to handle,” and now they say that they’ve finally done it. The OnePlus 8 measures 6.3″ tall by 2.87″ wide by 0.3″ thick, and it weighs 6.3 ounces. Ryan spent a lot of time in the livestream talking about how light and slim the OnePlus 8 is, and how that makes the phone seem so much smaller than other similarly sized phones. But to me, these measurements don’t make the OnePlus 8 seem that much smaller than the 8 Pro. I guess I’ll need to actually get one in my hand so I can compare them. Anyway!

With shorter and tighter curves along the edges of its screen when compared to the OnePlus 7 Pro, the OnePlus 8 also has a more comfortable and more secure grip. It has an “industry-leading” 6.55″ Fluid Display (also 3D Corning Gorilla Glass) with a 90Hz refresh rate and 1100 nits at peak brightness, and it has the same 3.8mm punch-hole covering the 16-megapixel front-facing camera on the upper left side of the display. The OnePlus 8’s display has a 20:9 aspect ratio which is ideal for gaming and watching movies, and this display is included in that exceptional DisplayMate A+ rating.

Before you start thinking that smaller means less powerful, I remind you that the OnePlus 8 has the same Qualcomm Snapdragon 865 and Snapdragon X55 5G Modem-RF system as the 8 Pro, and like the 8 Pro, the OnePlus 8 can come also come with up to 12GB RAM and up to 256GB user memory.

The OnePlus 8 has a triple-camera system on its rear; the main camera is 48-megapixel with the Sony IMX586 sensor and OIS. The second camera is a 16-megapixel ultra-wide-angle lens with a 116º field of view. The third camera is an independent macro camera.

At 4,300mAh, the OnePlus 8 battery is just a little bit smaller than the battery on the 8 Pro. Unfortunately, you won’t get wireless charging on the OnePlus 8, but when using Warp Charge 30T, the battery will go from 0-50% in about 22 minutes, so there’s that.

Similar to its Pro counterpart, the OnePlus 8 comes in a sleek Onyx Black and the matte Glacial Green, as well as a brand new color — Interstellar Glow. Interstellar glow is an iridescent white; the color changes depending upon the lighting and the angle you look at the phone. You can see the OnePlus 8’s full list of specifications here.

If you’d like to watch the full livestream announcement, you can see it here.

So what do you think? Which OnePlus 8 Series phone is speaking to you?