Back in 2016, when I purchased my MacBook, I thought that 1TB of storage would go far. At the time, I was using Dropbox to store larger files in an attempt to go all-in on cloud storage. Four years later, and I once again find value in having my crucial documents and files readily available without having to use a browser to get to them. And thanks to these LaCie and Seagate portable storage solutions, I’ve been able to do just that. 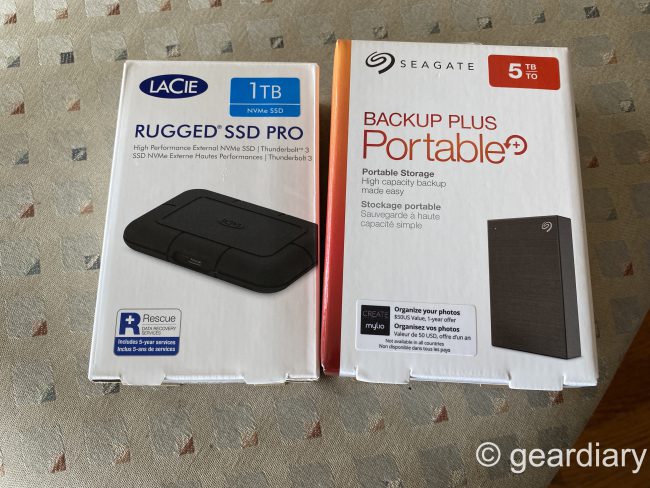 Over the past two months, I’ve been exclusively using LaCie’s Rugged SSD Pro and Backup Plus Portable hard drive. Both portable drives allow me to house all of those confidential and personal files and photos, but they are compact enough that all I have to do is toss one in my bag if I have to leave the house. LaCie was kind enough to allow me to pick not only the sizes but the colors that I wanted for each of these review units, but I tend to stick with black portable drives for no particular reason.

The Rugged SSD Pro is available in Black only, with the Standard Rugged SSD model available in Orange. The Lacie Rugged SSD Pro is a secure and fast SSD system that allows you to not only have consistent performance but 256-bit hardware encryption for all of your personal information. This is typically my GO-TO hard drive for holding my work data, all of my backup GearDiary contacts, and personal photos. 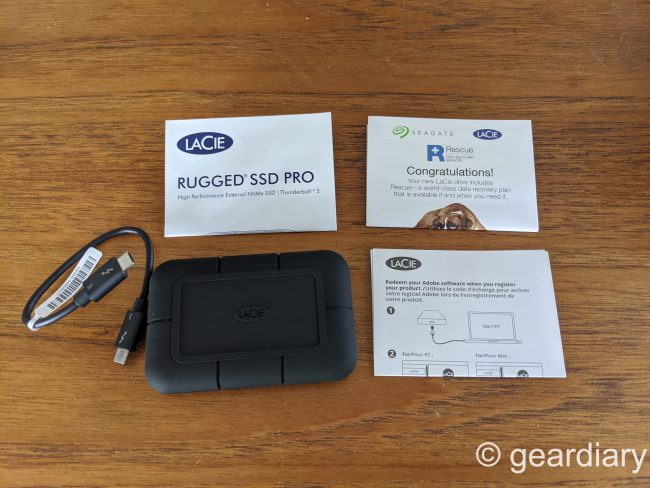 Coming complete with a Thunderbolt 3 cable in the box, the Rugged SSD Pro can perform up to 2.8 Gbps, perfect for those more extensive libraries that you have taking up precious desktop space. Working from home, having this functionality allows me to quickly take large zip files, extract, and even combine them faster than I ever could using my alternatives of Dropbox or Google Drive — both of those require an internet connection and a monthly subscription. If I were to ever run out of space on the Rugged SSD Pro, I’d simply purchase another larger model for my stockpile. 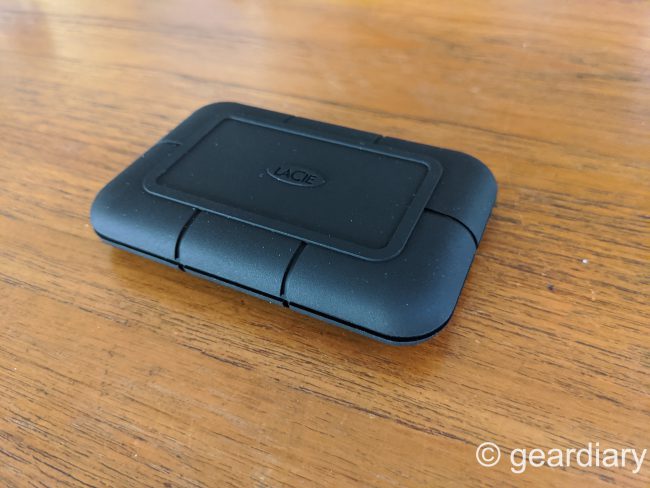 The 1TB model that I have not only matches the 1TB of storage in my MacBook, but it manages storage like a champ. Being the first-ever SSD I’ve reviewed, coming from more traditional hard drives, this has been a delight to use. One caveat that I should mention, though, is that at ~5″, the included Thunderbolt 3 cable is pretty short. I found myself purchasing a separate cable for when I’m on the go until I had a friend show me how they attach their SSD to the back of their MacBook so they always have storage readily available and so they always know where the SSD is.

Just thinking that Apple would’ve charged me another $6-700 to add more storage to my MacBook was enough for me to consider SSD. What I enjoyed the most about it, though, is it has password protection, which allows me to secure my files properly. Family Photos, Passwords, and any other data that don’t want just sitting up in the cloud, in a service that could potentially end up hacked or canceled.

Thanks to LaCie’s ToolKit feature, not only can you sync with your computer and use it for Time Machine, but you can individually back up essential files, restore lost files, as well as continuously sync. But, of course, to do that, the drive would have to stay plugged into the laptop.

A lot of my friends use their SSDs for photo and video editing. But in my case, I use it for when we podcast weekly using Zoom. When I have the rugged SSD plugged into my MacBook, I can have our podcast shows automatically go into the SSD, which makes it easier to store without compromising any data speeds transfers or potentially losing the file. Before this, I had Zoom connected to Google Drive, which could be a potential disaster if Drive were to crash completely, or if my internet speeds caused the file not to upload correctly. I also can’t tell you how many times have attempted to download a large document or just a large file that could have been maybe 2-300 gigabytes, not realizing that my MacBook only had around 400 gigabytes left. Now with the Rugged SSD Pro, I never have these problems.

The Rugged SSD Pro by LaCie comes in 500GB, 1TB, and 2TB. My next goal is to get the 2TB or wait until LaCie eventually puts out more massive storage for the SSD Pro so I can use it to catalog my Plex Server with movies and TV shows on the go. The 1TB that I ve been using has a sequential read and write of 1000 MBps per second and a write of 950 MBps per second, which is pretty impressive. 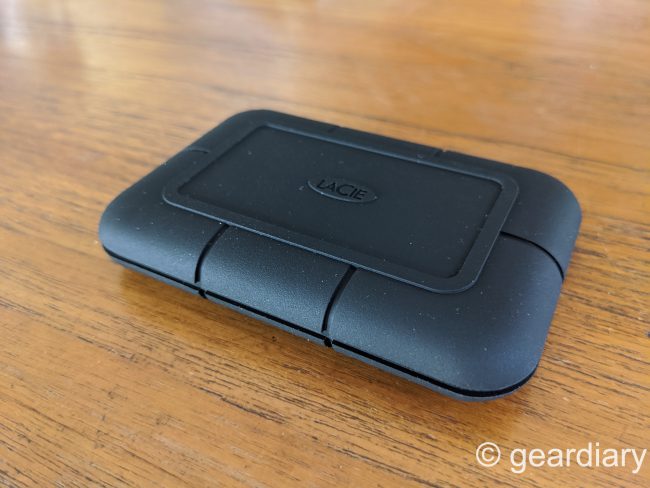 Measuring 3.9″ long by 2.6″ wide by 0.7″ thick and weighing in at just under 100 grams, it is easy to see this is the “get up and go” SSD to beat. Not only is it able to survive drops, but its grippy design keeps it from sliding around on a desk or table. According to LaCie, it can handle drops up to three meters and even can be run over by a car, which is more than AppleCare covers on my relatively delicate MacBook Pro, so I’ll take it. The SSD is also waterproof, which I appreciate, especially when I’m working in a coffee shop. The waterproof USB-C port sits on the long end of the hard drive. 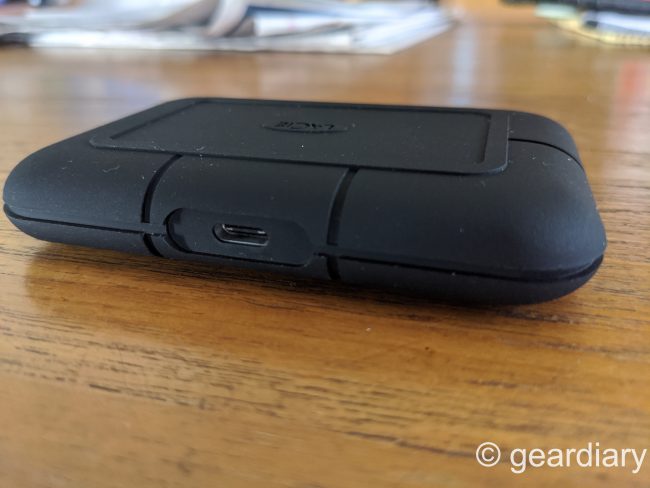 To test speeds, I copied my iPhone Pro Max Cloud backup folder from my desktop to the Lacie Rugged SSD Pro to see how long it would take. For the 8GB backup, it took a total of six minutes to download on standard internet. I’ve taken advantage of the workaround shown above to attach the SSD to my MacBook — using the cable and some 3M Adhesive tape that I stuck to the back of my MacBook case. So when I’m in a coffee shop, it’s not sitting on the table; it’s attached to the MacBook itself. 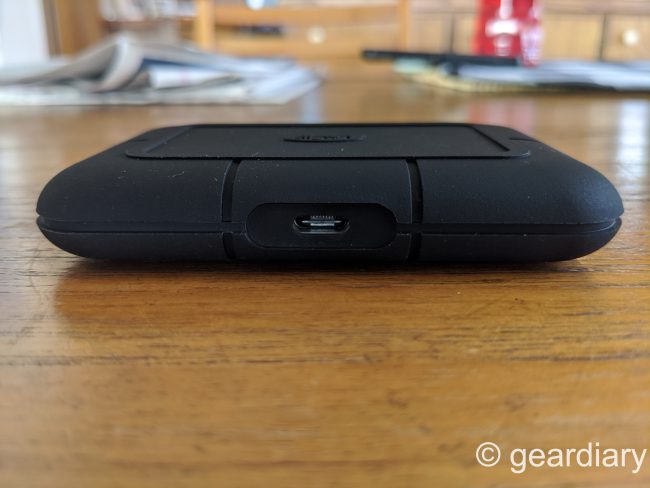 I like the fact that LaCie opted for putting the Thunderbolt 3 port at the top of the device versus on the side, because for some reason, I’ve had a habit of accidentally pulling the cables out while sitting at a desk, and that’s certainly not a good thing. On the side of the device, there’s a white power indicator that lets you know when it is connected to the computer and when it’s not, so that helps out a huge deal. The Lacie Rugged SSD is my go-to everyday SSD, and it travels with me in my tech bag everywhere I go. I used it while camped out in the hospital, and I found it to be durable and versatile. It got me through almost a week of horribly-postured typing sessions, including this article.

The Lacie Rugged SSD Pro retails for $401, and it is available from Amazon [affiliate link] and other retailers.

What I Like: Ultra-portable, and I can use interchangeably with my MacBook and iPad

What Needs Improvement: Thunderbolt 3 cable is a bit too short at 5 inches — Lacie should include a longer cable 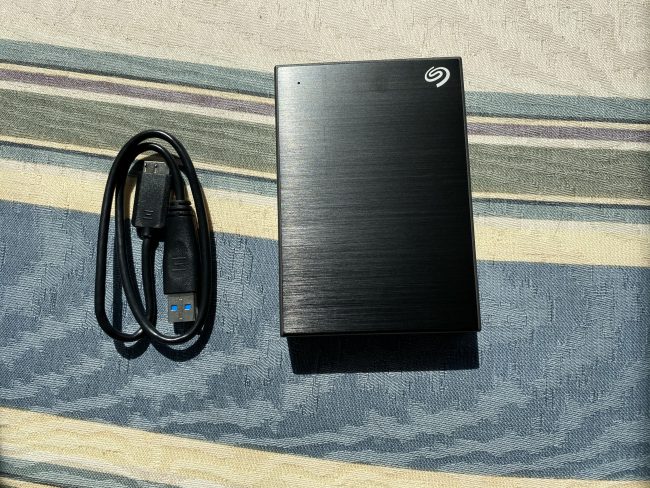 When I’m using my standing desk at home, though, I tend to use my Seagate Backup Plus Portable. Available in a variety of sizes in terms of onboard storage, I opted for the 5TB model. I’ve been attempting to set up my very own Plex Server since I’ve been home, and over the past month, it’s been going relatively well. I’ve always had a love/hate relationship with portable hard drives because of their internal spinning, constant overheating, and the eventual death and loss of everything stored on them. 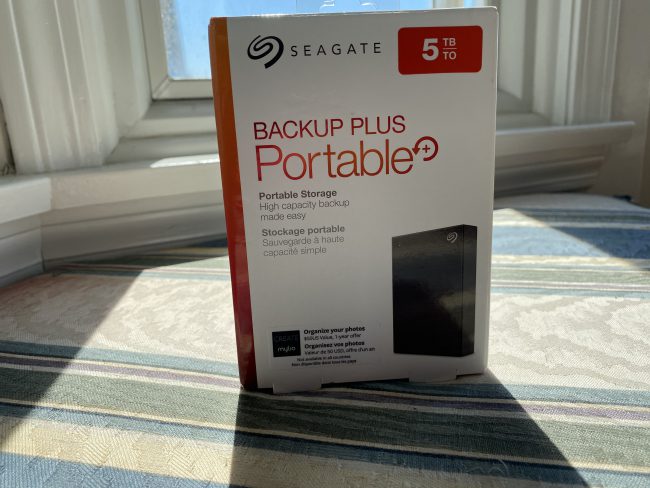 The Seagate Backup Plus Portable comes with a trial for Adobe CC Photography and a one-year Mylio “Create” plan, both of which I completely disregarded but might be of use to someone else. Aside from that, the 5TB hard drive has a smaller footprint than many other hard drives at 4.5″ long by 3.15″ wide by 0.8″ thick. 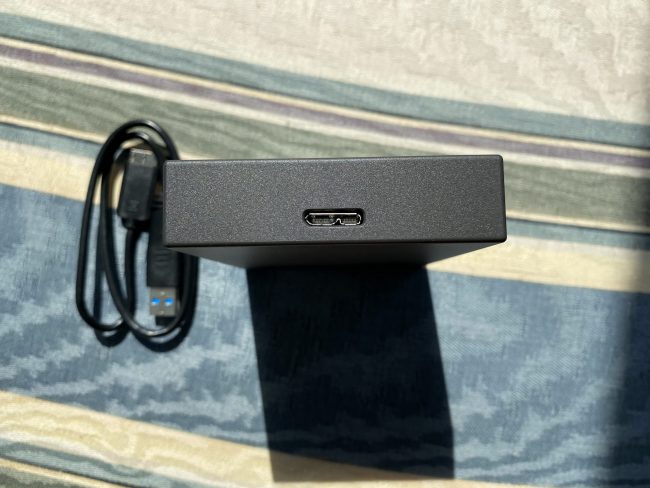 The Backup Plus Portable works with both macOS and Windows 7 or higher. I almost exclusively use this hard drive to house all of my media, including videos and shows for Plex. The Backup Plus Portable can house up to 500,000 high-resolution photos, which Jess and I will likely do within three years, at the rate we’ve been taking pictures of baby Skylar. If you are storing video media, you can expect it to hold about 165 hours worth. This is great if you’re beginning your cable-cutting journey, or you decide you want to go fully digital and get rid of that collection of DVDs sitting in your basement. 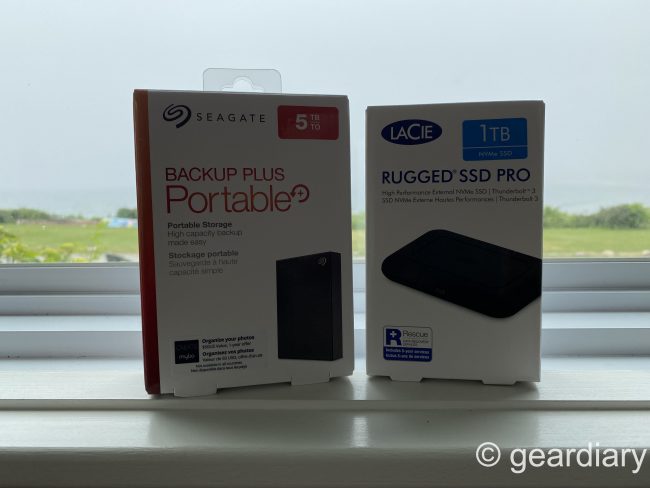 We all know that external hard drives are useful tools for housing all of your files and data, but I’ve been impressed by what I’ve seen out of Seagate and Lacie. Their ability to give you a mobile solution like the Rugged SSD or allow you to hoard all of your photos, playlists, and documents on the Backup Plus is truly remarkable considering their prices are modest these days, especially compared to cloud services. Instead of paying the reoccurring monthly or yearly fees on these services, either of these backup solutions would be a great choice.

The 5TB Seagate Backup Plus Portable retails for $104.99, and it is available from Amazon [affiliate link] and other retailers.

What I Like: 5TB is an insane amount of storage for the price; Small footprint, can easily slide into a back pocket or backpack