I am a big fan of the combination iPad case/stands that began appearing towards the end of the original iPad’s production run. This is especially true for those case/stands that are actually modular systems that extend the ways and situations where you can use the iPad. And although the original iPad is no longer being produced there continues to be a healthy market for used and refurbished units. 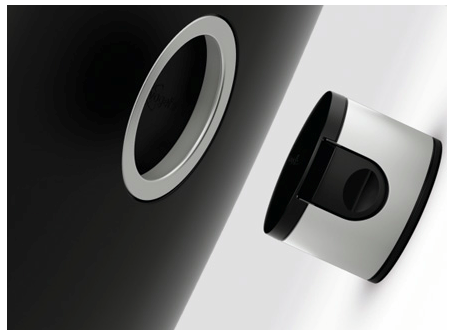 For that reason it makes sense to look at a few of the combination cases/stands that are still available and worth considering if you have picked up one of the discounted refurbished by pads or, like me, you have taken the lower prices as the opportunity to bring parents or friends into the iPad world. There are two case systems I have been reviewing and today we are going to take a look at the RingO system from Vogel. It is by far the most flexible and extensive system I have seen and there are new components on the way. Better still it is not just for one iPad or the other. More on that shortly.

Here’s a look at a few parts of the system.

RingO®, the Universal Tablet Mounting System from Vogel’s®, lets you mount your tablet, such as an iPad or Galaxy Tab where you want it. RingO® gives you more opportunities to enjoy your tablet wherever, for whatever. Unlock the full power of your device – in one click enjoy movies in the car, show presentations on the wall, instructional videos while cooking or holiday photographs on the coffee table. The precision-engineered aluminum ring clips snugly onto the tablet mount, and stays there. This European designed system is fast becoming the universal standard in tablet mounting systems worldwide. Allowing you to experience even more with your tablet.

What I first saw this system I was intrigued by design, numerous accessories and by a heavy-duty metal ring at the center of the design functionality. As is the case with the majority of these combination systems the centerpiece of it is a shell case that protects the iPad’s back, sides, top and bottom and is able to accept various accessories that are part of the system. In this case the iPad shell is hard plastic and very well made. It doesn’t add a lot to the length and width of the device but it does add some depth. That is only because there needs to be a place for the various accessories to connect. It actually is tapered enough that it is quite pleasant to hold the iPad i your hand with the case on. 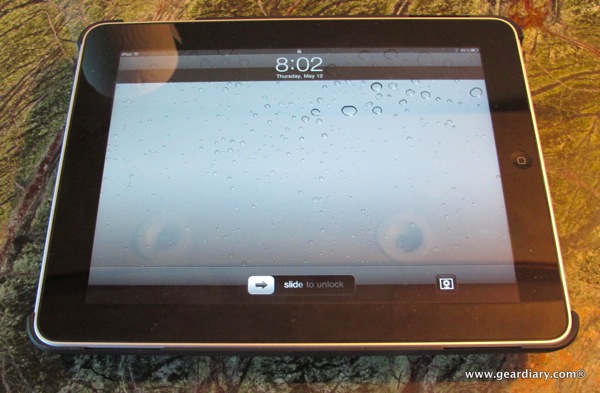 From the front you barely know the case is there at all!

The cut outs for all of the buttons and ports are precise.

For some reason the top is left pretty much entirely exposed.

So is the bottom but since the corners, the most vulnerable parts, are covered the case should give decent protection

So let’s take a look at some of the components that are part of this RingO system. Let me warn you; I’m starting with what I consider to be the worst of the accessories. It gets much better as we move through the system! 🙂

Table Stand: Stand your iPad on any surface

Ready to watch that movie, or to run that presentation? With the Table Stand the iPad with Holder can be placed in either portrait or landscape position, on a table, bookshelf or desk, for viewing your favorite photos, films or TV shows, or for that critical business pitch.

The Table Stand uses the same Holder that is at the heart of the RingO® system – click it into place, and rotate for portrait or landscape viewing. Put your iPad with Table Stand on a suitable table, bookshelf or desk, touch Play, sit back and relax. 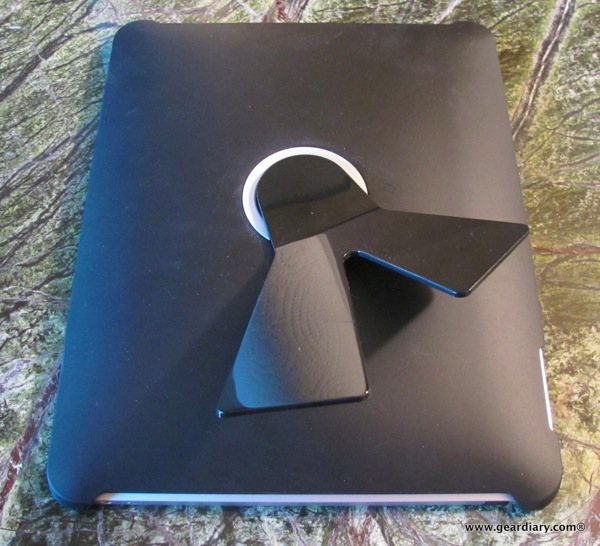 As noted above, the table Stand was the biggest area of disappointment with regard to this system. It isn’t that the table stand doesn’t work well, it actually does. It holds the iPad in either portrait or landscape and it keeps the device at a good viewing angle. So what’s my issue with it? It just looks and feels cheap. It’s a simple piece of plastic that clicks into the center ring on the iPad shell. It’s a bit flimsy, lightweight, and it just doesn’t seem to even be part of the same system where the rest of the accessories are heavy duty.

Also a bit odd in my opinion is the fact that the other accessories click into place with two pressure buttons on the circular ring extension. This, by comparison, holds the place with simple friction and his removed by physically lifting up on the larger of two legs. It is an inelegant solution and every time I removed the table stand attachment I thought it was going to snap. It didn’t but this just doesn’t feel like the best way to do things, especially when the rest of the system is so incredibly impressive. 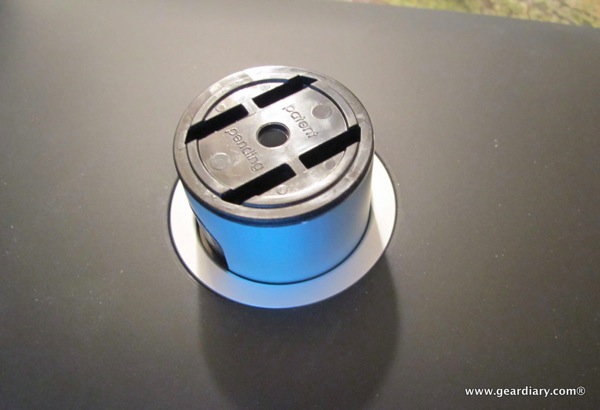 Wall Mount: Mount your tablet on the wall

The Wall Mount is a discrete and stylishly-designed button that can be screwed onto almost any surface. Any tablet with a Vogel’s Holder can then be easily clicked onto the Wall Mount so it hangs safely in place, ready for viewing films, photos, recipes, or any other application. Once mounted, the tablet can be freely rotated through 360 degrees, and the locking system ensures stable and secure support. And unmounting the tablet is just as easy. 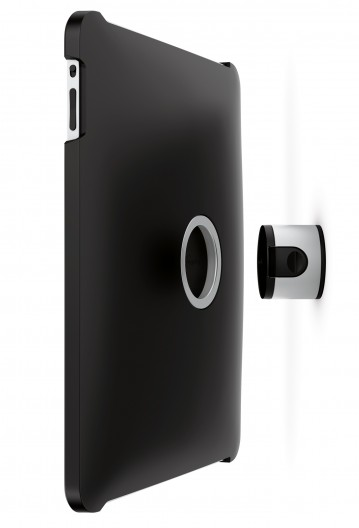 I said it gets better after the table stand and it does. The wall mount is really quite neat. It is a simple disk that screws into the way and sits there not calling all that much attention to itself. when you want to put the iPad in place, for viewing a video, or reading a recipe… whatever, you simply push the iPad up against it and… click… it is securely affixed.

Here’s a video of it in action!

Car Mount: Watch your iPad in the car

For those on the move, look no further than the Car Mount. Adapted from Vogel’s successful DVDock, the Car Mount is the safest and most secure way to let your passengers use their tablet. No tools are needed to install a Car Mount, which is securely fixed to the front seat headrest (suitable for headrests from 10-20 cm). The tablet with Holder is then simply clicked into place for each journey. Now back seat travellers can enjoy all their content on the iPad or Galaxy Tab whilst on the move. 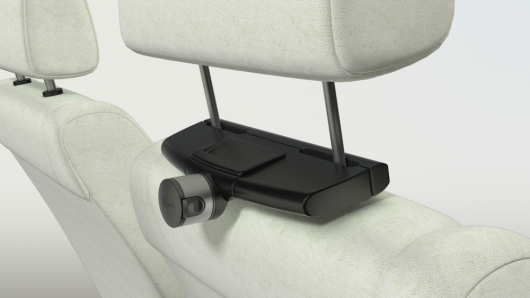 The Car Mount is really something. It is heavy-duty, easy to attach and remove and it does a great job of turning the iPad you already own into an in-car, “keep the kids happy” entertainment system. (I have to imagine the car companies are none-too-pleased since in-car entertainment was a nice add-on they could sell at a tidy profit. With a new iPad just $499 and a used one less why would anyone buy the stock system these days?)

(My dark car interior doesn’t show off the headrest well hence why the company used a white interior and… I used their images.)

I also figured it would be worth using their video…

There are even more accessories that are, or will be, available from Vogel that will make this system even more flexible. Among them are the Flex Mount, “the most flexible wall mounting solution for your tablet” and the Flip Stand which is a Smart Cover-like add-on for the RingO.

Perhaps the best aspect of the RingO system isn’t really a specific feature but something more conventional… and practical. This system is universal. Yes, it isn’t limited to just iPads. While right now the system is only available for the iPad, iPad 2 and the Galaxy Tab but I have no doubt more cases will be coming along for a host of other tablets. And that is the key to this systems real appeal. So long as you have the specific case for the tablet you are using the rest of the system will work with any device. That means if you have an iPad and your significant other has the Motorola Xoom tablet the same accessories will work with both. It also means that when you upgrade your system it won’t turn around and become useless if the form of the device changes. That’s a pretty good selling point.

The RingO is an interesting, flexible system that can grow as your tablet use does. It has numerous accessories that making using your iPad more convenient than ever and while the initial investment in the system can add up the fact that the main system can be used with a variety of tablets means it won’t become obsolete when the tablet’s product-cycle comes up for renewal.

While the site does not currently list a way to buy the system you can get details here on Vogel’s TabletOnTheWall site and will find purchase information when it goes live.

What I Like: flexible; universal; attention grabbing, usefulness adding

What Needs Improvement: Table stand is cheap and flimsy and outrageously priced at $19.99; Complete system can be costly upfront