Pat Metheny is one of my favorite artists, and I am pretty much guaranteed to buy whatever he releases, and have been thrilled with the quality of work in recent years (he lost me for a while in the late 80s / early 90s). I truly enjoyed his Orchestrion release, and the live performance I took my family to see. Last year he released a DVD of the project which I enjoyed, and now we get the full set of music from the DVD. One could ask ‘where is the line crossing into over-milking a project’, and it is a valid question I will address later. So let’s jump right into the Pat Metheny Orchestrion Project Review! 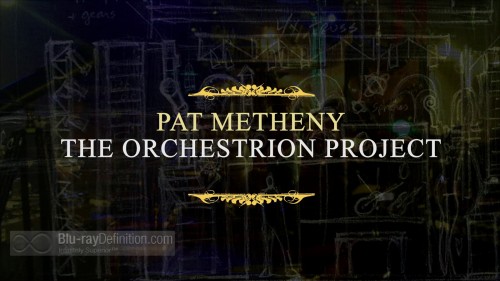 As I mentioned in my original album review, for his Orchestrion project Metheny brought in a team of technical inventors and experts to help him construct an amazing bit of instrumentation that he can at once control through footpedals and other means while also triggering some off of his guitar, allowing him to adapt the flow of music on the fly yet also having a large enough set of preset musical architecture that what we get are fully formed songs and not just some rote phrases repeated ad nauseum while he jammed on top.

For the full project he has versions of the album songs performed live in the studio, but he also has another full CD of songs from his vast library of compensations. He also has a couple of improvisations, pieces of music that demonstrate the power of the Orchestrion and were a highlight of the live show.

The basic structure of the album is the same as the original Orchestrion. Music evolves over time, has a highly structured feel and is all led by guitar. If you didn’t know that you were listening to an automated control system-based musical experience you would just think it was a Metheny-led effort like Secret Story with other musicians and loads of overdubs.

As I mention, the songs from the album are presented here as well, and the majority of the music sounds identical – which is pretty much required by the way the Orchestrion works. But Metheny isn’t constrained by those mechanics, so you get to enjoy the subtlety of his playing and inflections on the songs, much like you would when seeing him perform them live.

But the stars of the show are the improvisations and the reworked old songs. The improvisations show off the power of the Orchestrion, as you can hear Metheny building stacks of sound, moving instruments around and changing up chorus and verse and improvising freely over everything. The album versions are cleaner than what he played live, but it gives you a feeling for what he can do with the Orchestrion in real-time. Similarly, he brings back songs from Secret Story and 80/81 and reinvents them for the Orchestrion. They are loose and highly improvisational, and

‘Quick Hit’ Song: “Improvisation #2” – I recall sitting watching Orchestrion live, and how he played a couple of songs in a row from the album and there were only subtle changes, and I was really hoping to see him explore the power and creative possibilities of the Orchestrion. That is what these improvisations are, and why I love them. He performed similar songs live, and it was simply amazing to watch him walk around controlling various instruments and building up a massive stack of layers and then building a chorus and bridge, and finally putting it all together and improvising on top of it! It is gorgeous music that is inventive and fun.

Would I recommend?: It depends! Given how much I liked the original album, and how highly I think of Metheny as a composer, it should be no surprise that I really enjoy this entire two-CD set. There is an incredible breadth of high quality music here, with different interpretations of every song – this isn’t just an ‘Orchestrion plus extras’ collection, it shows how even the original music grows and changes over time.

But is there a point at which enough is enough? After a CD, a DVD and now a CD based on the DVD based on the CD … are we at that point? For me the answer is ‘no’, but for most people I would bet they would see this release as superfluous. It is a tough decision, which makes the recommendation difficult – it really depends on how much you are looking to get from this music.

Suggested audience: If you are a Pat Metheny fan and don’t already own Orchestrion, go grab this one! If you are a big fan and own the original, you might still want to grab this because it adds so much. For any fan who has enjoyed Metheny’s music, The Orchestrion Project holds huge possibilities to enjoy the greatness of this music while more deeply exploring the inner workings of how it comes together.