Posted By: Michael Anderson May 28, 2013
ShareTweet 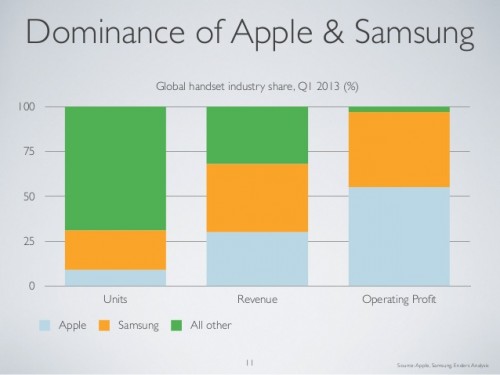 What Color Would YOU Want to Be?

If you listen to most pundits, Android is absolutely DESTROYING Apple. I mean, if you look at the global smartphone market, Android has more than 70% and Apple has less than 25%. Even in the US market, iPhone and Android pretty much split the market. In the larger mobile phone market, Apple has an even smaller chunk of the total product volume. But as noted here, and as I have mentioned before, Apple continues to take in the majority of mobile device profits, with more than 60% for all of 2012 and 57% for Q1 of 2013. The rest of the profit went to Samsung, and everyone else balanced out at zero.

It is easy to pick out the losers as of right now – companies such as HTC that are bleeding market share and losing money as big risk launches such as their ‘Facebook phone’ flop. But who is winning? Samsung seems the easy pick – they have 33% of the Smartphone market, nearly double the volume of Apple. And with 43% of profits, they are actually getting a great return on their market share for he first time as their high-end Galaxy S3, Note II and now Galaxy S4 devices have proven extremely popular. This has given them the best sales-to-profit ratio outside of Apple in the smartphone era.

But there is yet another way to look at things: static vs. dynamic. Samsung has seen an increase in profit per unit over the past couple of years, just as Apple did in the prior couple of years. This past year Apple has seen their profit margin decline, and they have struggled to keep their pricing terms the same as they work into new markets such as China. Even in the US, more and more carriers are bristling at the heavy iPhone subsidies – which means that Apple will continue to feel significant downward price pressure.

That might seem like an opportunity for Samsung, but some analysts have noted that Samsung’s results show signs of price pressure due to entering markets in India and China and having to make price concessions. Therefore we can assume that their profit-to-sales ratio has peaked and will start to drop over the next couple of years as smartphones become even more commoditized. But one thing working in Samsung’s favor – they are much more accustomed to working in lower margin areas than Apple (or Sony, for that matter).

So who wins? For now, it is consumers – never before have we seen such an amazing array of incredibly powerful and capable devices with such great third-party support for apps and accessories … and all for such a low price! One other thing we know – when pundits seek to tell you the big picture based on last quarter’s results, you should really think of how many times we have heard analysts predicting failure for things like the iPhone or iPad, or continued success for things like Palm or Blackberry or Dell. No one can tell you for sure where things will be in five years … but I can’t wait to find out!