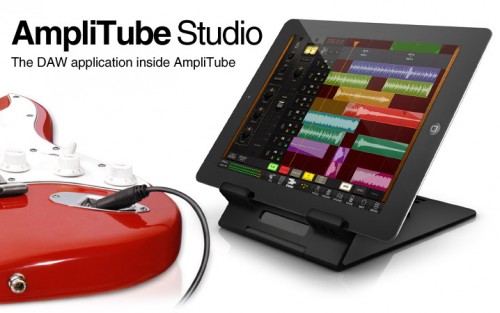 Along with the original iRig, IK Multimedia delivered AmpliTube, a high quality guitar amplifier and effects chain simulator. It all started simply enough, with a few effects and amp simulators and a solid sound that made it a great ‘practice amp’ in much the way the RockMan worked for musicians in the early 80s. Since then IK Multimedia has improved and refined and added loads of features – and now introduces the new ‘Studio’ interface as part of the version 3.0 update. Which is free to all existing customers. Let’s take a look! 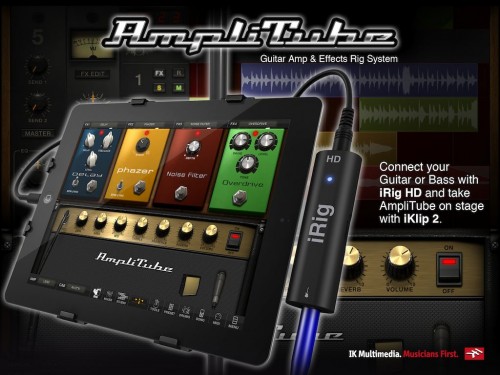 Description:
IK Multimedia has released a new version of AmpliTube, adding a multi-track Studio to the app.

Version 3 of AmpliTube adds a multi-track Studio, with timeline audio editing and new gear models. Now you can use AmpliTube to compose and record complete songs on an iPhone, iPad and iPod touch.

– a full guitar/bass rig;
– a multi-track recorder with effects;
– a new timeline audio editing suite for arranging, editing, mixing and mastering;
– a built-in programmable drummer;
– professional export features for sharing creations with the world;
– work simultaneously with other audio apps. 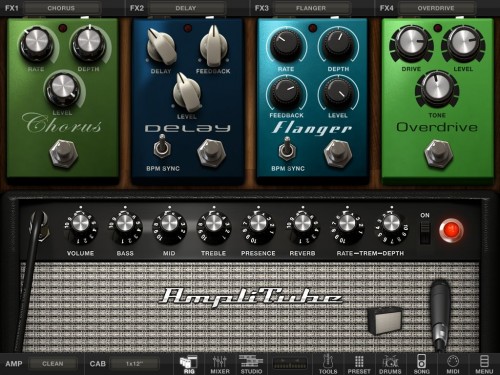 Version 3.0 of AmpliTube is basically ‘AmpliTube with an added DAW (digital audio workstation) recording system and a drum track’. While that is a simplification – and another reason I won’t be creating commercial titles for things anytime soon – it captures the essence of what is going on. All of the great stuff you already know about AmpliTube applies, and you add on a fully editable set of workstation functionality.

Recording in AmpliTube Studio is as simple as you would expect – just record enable a track, then when you tap record your audio is recorded with real-time indications of level. When you are done and stop you get the waveform displayed in track-view along with an indication of how the audio aligns with bars and time. You can tap the waveform to delete, move, edit, or copy & paste. This lets you set up a groove on the bass, and copy and paste to set up a full song with verse and chorus sections, and then overlay guitar tracks and play along to fill out the melody and harmonic structure. This makes it a great ‘scratch-pad’.

Another cool feature is a built-in drummer. You can get styles and patterns and sound-types all editable, arrange things on the fly, and drop in fills, turnarounds, rhythm changes and so on. I don’t get into it much in the video, but have discovered the powerful features playing around with it since. There is even more stuff available via in-app purchases – and this is something I like with IK Multimedia – you get a powerful tool at a reasonable price, with the opportunity to add more features if you need them. 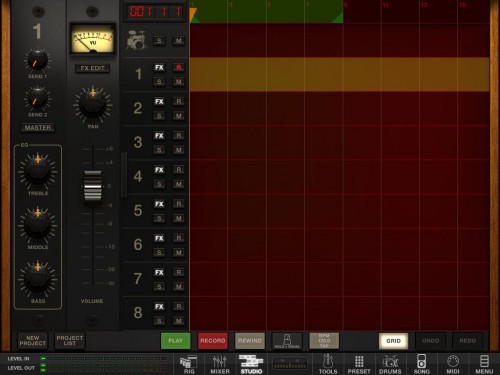 Aside from being able to record and edit, you can also apply effects and effect chains to add some dimension to your sounds. If you want to, you can make it much more than just a scratch-pad. You can normalize sound, create fades, stereo pans, clips, crops and so on. Your ability to edit tracks is nearly limitless. AmpliTube Studio has a full suite of mastering tools that work really well at getting high quality full-song results. If you can’t get everything out of AmpliTube itself, it still supports AudioBus so you can work with other apps to do audio processing on an inter-app basis. This makes things even more powerful.

And once you have completed working on your song, you can export in just about any format you would want to use either on your iOS device, or your Mac or PC to finalize your project and get it out to the world! All of this functionality is simply amazing when you consider that if you bought AmpliTube in 2010 you haven’t paid again, and have gone from a simple amp & effect simulator to a full-blown recording studio that works with other apps and the outside world seamlessly.

Have you used AmpliTube before? Then you are set on 75% of the app. What about a tape recorder? Great, that will help with the basic recorded. And how about GarageBand? Well, if you have then you will realize you have all the skills you need for AmpliTube Studio! 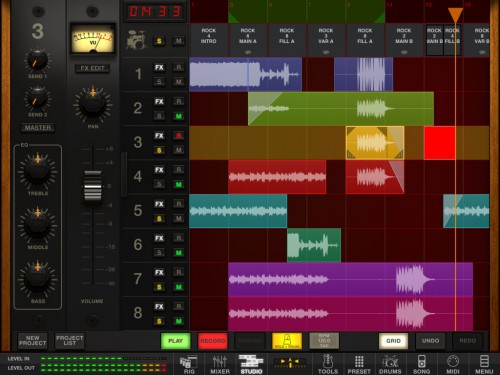 Would use again/recommend?: Definitely! I have long since made iRig and AmpliTube my ‘go to’ guitar setup for practicing around the house. It is amazingly versatile and the sound is fantastic. With ‘Studio’, I now have a ‘scratch pad’ to create multi-layer guitar and bass compositions over a drum loop and easily copy and paste and drag things around. 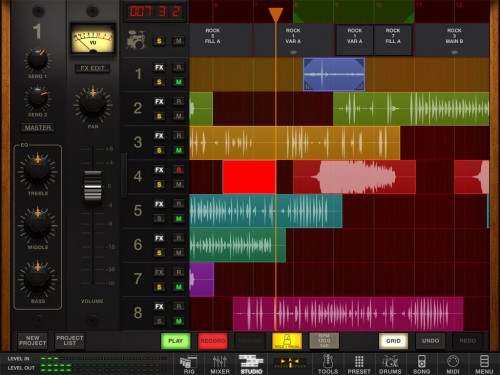 Here is my hands-on video review: