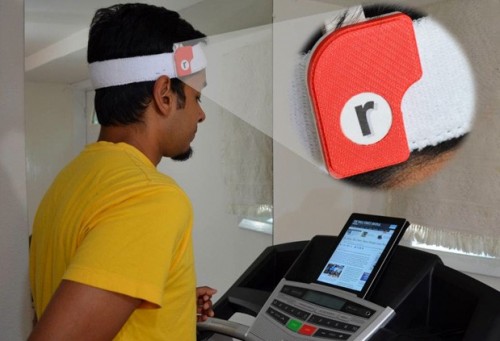 Do you use a treadmill or elliptical system for exercise? Do you read while on it? If so, you’ve probably encountered eye-strain as you were moving and trying to focus on the stationary e-device text. Run-n-Read from Weartrons seeks crowdsource funding to deal with this issue by tracking motion and repositioning text to keep it stable in your visual field.

Run-n-Read uses a combination of hardware and software to stabilize text. The hardware tracks your head motion relative to the screen and text, and the software runs on your iOS or Android device to shift the text position in real time so it appears steady.

Weartrons lists some of Run-n-Read’s features:
• Easily read in multiple dynamic scenarios where your head is moving, the accompanying iOS and Android application.
• Flip pages without reaching out to the tablet – one tap on the device takes you to the next page and two taps takes you to the previous page.
• Count the number of steps and calories burned, and act as a simple fitness tracking device as well.
• USB powered rechargeable battery – 20 hours of active use time and 1 month of stand by time.
• Available in four attractive colors – Ruby Red, Paradise Green, Ocean Blue and Coral Pink.
• Thanks to the Bluetooth Low Energy connection, Run-n-Read works completely wirelessly.

The funding period is active through October 5th, with shipment planned in January 2014.

The project is being hosted on Dragon Innovation, which is a bit different than Kickstarter or IndieGoGo in that they focus on hardware projects and get directly involved with the project. They review manufacturing plans and bill of materials (BOMs) to ensure a greater likelihood of success.

Check out the video and see it you want to support this project: