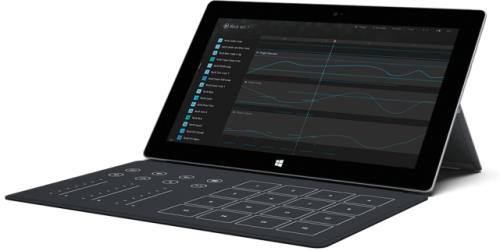 Saying Microsoft’s Surface failed to penetrate the market barely scratches the surface – the software giant took a $900 write-down on crappy sales. Now Microsoft has announced the second generation of Surface tablets, largely focused on improving the specs of the tablets with similar pricing as previous units. But the big surprise was the music-centric Surface Music Kit.

Let’s take a look at the Surface Music Kit before quickly discussing the new Surface 2 and Surface Pro 2.

Everyone knew that the Surface 2 and Surface Pro 2 were coming … the big surprise was the Surface Music Kit – a new keyboard + software combination designed for remixing.

– Experiment with content from familiar and emerging artists or import your own.
– Create new music easily using the loop, mute, and solo functions.
– Pressure-sensitive pads on the Music Cover control parts of songs, loops, instruments, vocals, hooks, and beats. – Sliders adjust volume and FX.
– Automatically syncs beats per minute (BPM) and key for seamless mixing. You don’t need to be a pro to sound like one.
– The Kit helps you choose which sounds and samples work best with each other.

Details are still fairly thin – we don’t know about the pricing, and whether the system is designed to work with other apps (like FL Studio Groove) or just with Microsoft’s own products. It also isn’t clear how customizable things are – is this just a simple consumer accessory, something to put in anti-iPad commercials, or something to take mobile music to the next level?

Microsoft refreshed the Surface, the system that felt lost between being a PC and a Tablet. The Surface 2 is powered by an NVIDIA Tegra 4 processor and running Windows RT 8.1. Microsoft claims this combination makes apps run faster and smoother and increases battery life to up to 10 hours for video playback. The 10.6-inch ClearType Full HD display now renders 1080p video and its full-size USB port has been upgraded to USB 3.0 for up to four times faster file transfers.

The cameras have also been upgraded, with a 3.5-megapixel front camera and 5-megapixel rear camera, both capable of capturing 1080p video and featuring improved low-light performance.

Windows RT 8.1 is also supposed to improve things such as search, multitasking, features and performance of built-in apps, personalization, the Windows Store experience and cloud connectivity. Surface 2 will be priced starting at $449 for the 32GB version (64GB also available, keyboard extra).

Here is a Surface 2 demo video:

Also getting a refresh is the Surface Pro. The new version is physically very similar, but is now powered by a fourth-generation Intel Core i5 (Haswell) processor which Microsoft claims delivers increased performance and up to 75 percent longer battery life than Surface Pro. It also features a two-position kickstand.

The Surface Pro 2 starts at $899 for 4GB RAM / 64GB storage, and also comes in versions with 8GB RAM and up to 512GB of storage. Keyboard accessories are extra.

What do you think? Is any of this enough to entire you to give it a shot?