While my full review will have to wait for the release in November, I have been playing the preview of Avadon 2 from Spiderweb Software on the Mac, and now that the window has opened to release public preview impressions … I can tell you I am impressed. Everything good about Avadon remains good, and everything lacking is better.

As a Hand of Avadon, the Black Fortress, you once held unlimited power. Your word was law. Your homeland was united and prospered under the protection of the Black Fortress. Now that fragile alliance has collapsed. Rebellion rages, outside enemies gather, and Avadon lies in ruins. Will you fight to restore your power and bring peace to your realm, or will you join the rebels and forge a new nation? The decision will be yours in Avadon 2: The Corruption.

If you have played the original Avadon, you know exactly what to expect. Satisfying turn-based combat, huge world with loads of things to discover, interesting characters and stories worth reading.

The combat system uses a simple turn-based approach – you can simply click on an enemy to perform a default attack with your default weapon, or you can choose your alternate weapon set, open your inventory and use an item, or select a spell or skill to use. In the video I play as a fighter (Blademaster), meaning my character likes physical attacks most and has skills that augment those attacks. 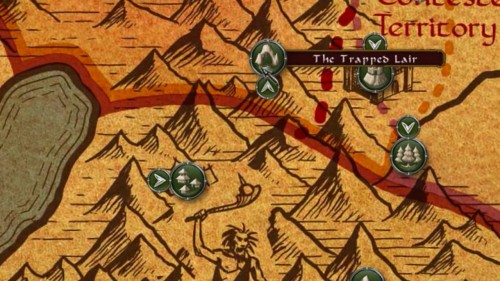 For most of my play time I use a Sorcerer, who favors ranged spell attacks – and does poorly when directly attacked. The variety of gameplay depending on what character type you choose makes replayability loads of fun. Leveling up allows you the opportunity to further customize your character to tailor to your style.

One concern folks always have with Spiderweb games is the graphics. It is not an issue I have, but I understand it – the game is presented in isometric format with indirect clicking for movement. The characters certainly don’t look like the highly detailed Skyrim archetypes, instead they are closer in style to those in Baldur’s Gate.

The other thing that impressed me was that in spite of not being completed yet, the game performs well, never crashed, and has text, music, and fully completed story and dialogue screens. It feels ready to play as soon as the other parts are filled in.

My concerns with the original Avadon were that it was a bit smaller and perhaps shallower than many of the Avernum and Geneforge games. I have found Avadon 2 to feel much larger in scope and size – obviously I don’t yet know the full size of the game – and it compares well with the best stuff Spiderweb has released!

Outlook: Excellent! Spiderweb knows their audience and what they want, and this game delivers!

Here is my video preview: