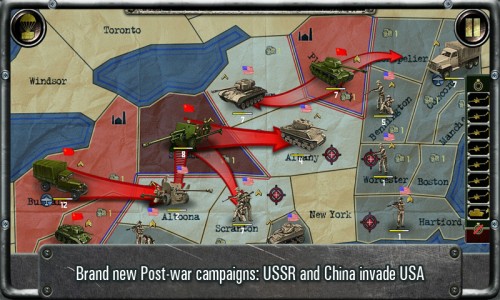 Strategy & Tactics: World War II from Herocraft is one of the few ‘grand strategy’ games on iOS and Android. Grand strategy games in the tradition of ‘Hearts of Iron’ are difficult on many levels, and attract a core ‘grognard’ audience. You act as commander of huge armies and manage the smallest details of international commerce and military operations.

The original Strategy & Tactics: World War II is available for iOS and Android, and the iOS version has gotten some new campaigns available through in-app purchase. For the Android version Herocraft has just launched a huge new expansion called ‘USA vs. USSR’.

If you are a fan of detailed military strategy games this is definitely worth checking out. Here are a few of the features:
2 alternative history campaigns (17 missions)
3 maps in scenario mode
Global multiplayer across different smartphones and tablets
Endlessly replayble Skirmish mode
Juggle military, economic and scientific development