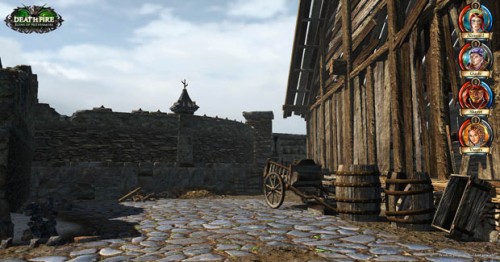 For fans of traditional computer role-playing games (cRPG), there has been a bit of a drought of games the last couple of years. There have been some really good games, but they have been few and far between. Now there’s a Kickstarter for a new RPG that is something RPG fans can get excited about called Deathfire: Ruins of Nethermore!

Note: Deathfire is down to the final 3 days of funding!

Here is the basic description:
“Deathfire: Ruins of Nethermore” is a party-based computer role-playing game with turn-based combat that hearkens back to the Golden Era of fantasy cRPGs. Built upon the power of the Unity 3D engine, “Deathfire” utilizes a first person view that gives the player the feeling of being there. A solid role-playing engine that utilizes over forty visible character attributes, along with countless invisible ones to track behavior. They make up the heartbeat of the game, and allow us to analyze and adjust gameplay on the fly, and react to the player’s actions, shaping the story around these actions and decisions.

Here are some of the key features:
•Single player, first person Party-based play (four player-, plus two non-player characters)
•Six races and eight classes to choose from
•Over 34 unique character traits, plus base attributes
•Party characters interact with each other
•Turn-based combat
•Indoor and outdoor environments
•Complex puzzles and evolving quests
•Combine items to build weapons and traps
•Interactive game world
•Recipe-based crafting and enchanting
•Involving, adaptive storyline with many key players and twists
•Factions for intriguing political set-ups
•Tons of monsters to battle
•Dialogues—yes, you will be in awe at our cool and intelligent dialogue system

The funding period ends Saturday December 7th so head to the Kickstarter page to help make this game a reality!