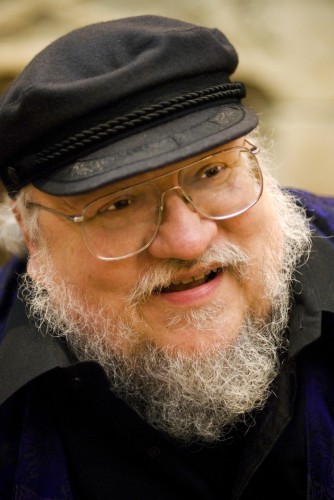 Are you a Game of Thrones fan? I am! And if I lived in (or was passing through) Santa Fe, New Mexico any time soon, there is a good chance that I would be privy to something amazing — Season’s 1 – 3 of GoT on the big screen, with guest appearances from George R. R. Martin, himself!

As George recently wrote on his Not a Blog LiveJournal,

Starting on Monday, January 6, and continuing through late March, the Cocteau [in Santa Fe] will be presenting weekly screenings of GAME OF THRONES, in order.  Some weeks we’ll show two episodes, some weeks three.   I expect to be on hand personally for many of the screenings (though, PLEASE NOTE, probably not all), to introduce the episodes beforehand, answer questions afterward, and sign a few books as well.   And it may be we will have some other special guests as well, either in person or via Skype.  Can’t promise anything as of yet, but we’re working on it.

So if you live in Santa Fe, or if you happen to (fortuitously) be traveling thorough, you have a chance to possibly see George R. R. Martin and to catch up on the first three seasons of one of my favorite book series and television series in preparation for season 4!

Here are the show dates:

As GRRM says, “Admission to all GAME OF THRONES screenings will be ABSOLUTELY FREE. No tickets, no passes, no payment required. First come, first served. Come to the Cocteau and come on in… so long as we have seats. But we only have 125 of those, so best come early if you want to be sure of a place.”

As if GoT on the big screen,  possibly seeing GRRM in person, and hearing him answer questions about the show and his books wasn’t enough, there will also be door prizes. I’ve never camped out in a line for an iPhone, but I would camp out in a line to attend this.