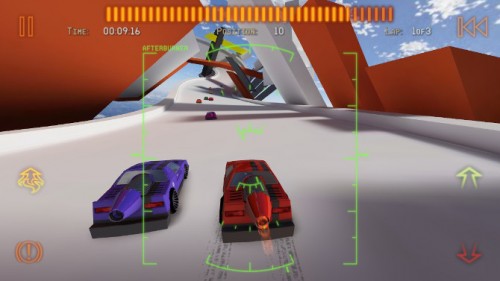 In Jet Car Stunts 2, you are driving (piloting?) a race car that can also fly/glide in the air using the car’s jet engine, which definitely adds a neat twist to the basic racing genre.  The game uses True Axis’ proprietary physics engine, as they originally started out as a physics engine company.  In JCS2, you can race on your own and compete against the world on the leader boards, or you can create your own levels and share them with the world.  The game features 120 levels with 3 difficulties on each level (plus infinite user-created levels), 7 cars with their own different handling, 4 game modes, and more.  I think it may be best to check out the launch trailer below to learn more:

Although Jet Car Stunts 2 is free to download, there are in-app purchases that unlock other parts of the game.  Before you start thinking that this is one of those typical freemium games where they offer in-app purchases to either make the game easier or give you an advantage over other players, Jet Car Stunts 2 has more of a “try before you buy” vibe.  You can play a ton of races for free and you can decide which modes you prefer.  Then, you have the option to purchase more races for a certain mode with the in-app purchases.  In my mind, this is a great approach because it gives players the option to try the game before they buy it.  In order to purchase everything the game has to offer, you’ll need to shell out $4.99.

You can download Jet Car Stunts 2 from the App Store.