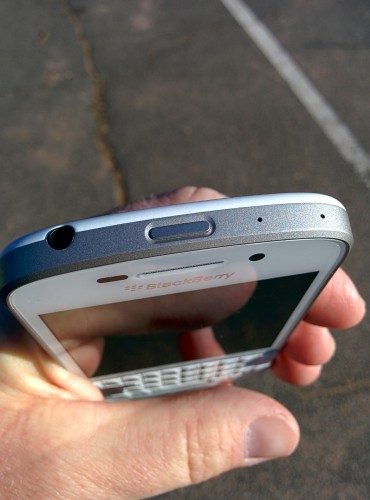 As I noted previously, I ordered the BlackBerry Q10 off contract via Amazon primarily out of nostalgia, because I think this is going to be the last widely available North American  BlackBerry device with a keyboard.

Mitchell Oke hit the nail on the head with his review of the Q10. Nice solid smartphone, but you feel like you’re looking at the comparatively small screen of the Q10 through a mailbox slot.

Big fat borders on the top and bottom lead you to be constantly scrolling to read email. If I were serious about adopting Blackberry as my sole device   I’d probably return this ASAP for a BlackBerry Z30 with bigger screen real estate (which are now available directly from BlackBerry for $499 unlocked and contract free).

The keyboard? Well I think my memories were better than actual practice. The keyboard is definitely nice, however I’ve become pretty accomplished at touch screen keyboards and the physical keyboard on the Q10 is not as useful as I thought it would be. And in advance, I thought it would be really useful. When typing at night on the BlackBerry, I find myself wishing for a screen based keyboard which I’ve grown accustomed to managing without having to re-arrange my grip on a device as I have to with the Q10.

At first the out-of-the-box experience is good. The build quality seems solid. My initial device had a faulty power button that stuck in the off position  — which sadly did not appear until I went to put the phone in standby mode by pushing power, and it shut down in the midst of Verizon’s big 10.2.1 OS upgrade.

As with legacy BlackBerry devices – the cure for most of these unfortunate incidents is to wipe your phone and start over.

I bought my $399 BlackBerry Q10 from Amazon (where I buy all my phones). I called their customer service on the phone, and within 5 minutes (maybe 3) they have me scheduled for a cross shipped device. No questions asked. I cannot recommend Amazon phones highly enough. You can usually purchase no-contract at the same or sometimes cheaper than the store with lots less hassle.

Other than the major social media apps – FB, Twitter, LinkedIn – I’m not loading anything else. Partly because I find there is not much else. I’m not interested in side loading a bunch of Android apps, because this is a secondary device for me. If I were going to use it as my primary, I’d probably download the Amazon App Store where I could then download many Android apps.

Not  A Smartphone Your Mom Would Love

Only because I hope that BlackBerry doesn’t go away, do I wish that this UI was easier. If there wasn’t so much swiping and moving around it would almost be a nice phone for parents or those not needing a bunch of apps. The concept of the hub is interesting, but I feel it’s ultimately too confusing for most people.

BlackBerry just missed the mark with the usability of the OS on the Q10, and in retrospect they should have completely abandoned BB 10 and gone Android with a skin. Personally I think Microsoft is wishing that had happened too. for that matter,  I also think Microsoft missed the mark with the functionality of their mobile operating system (e.g., Live tiles that aren’t live, notifications that disappear forever – 2006 called they would like their smartphone operating system back).

Of course most of these OS shortcomings are met with “yeah, but”.  Yeah, but just wait until the next release. Yeah, but you can use a workaround.

Yeah, but – most people don’t want to wait or workaround – they want a device that works out-of-the-box in a manner similar to their friends device and one which has all the same apps available.

For now the BlackBerry Q10 is my spare device. I see it as a collector’s item. A window into a bygone era of smartphones.