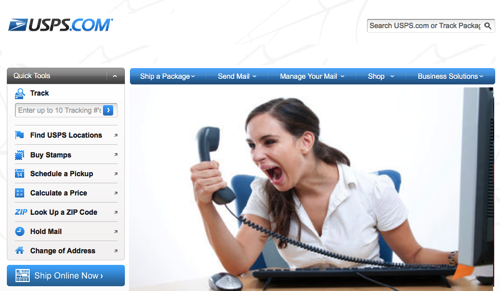 My dislike for the United States Postal Service is at an all-time high. An iPad I sold on eBay vanished after I sent it. I get that packages get lost by USPS. It is what happened since (or more appropriately, what has not happened since) that is making me nuts. This tip at least let me speak to a human-being.

I’ve sold countless items on eBay and have shipped all of them with the Postal Service. Until now I have not had an issue. This, however, has been enough to put me over the edge.

Background on my issues with USPS

The package was last seen by USPS a week and a half ago. I’ve tried to speak to people and, initially, did get someone on the phone. I was told I would get a call back in a day. That, of course, never happened. I have been speaking with someone in my local office and he has been great. Even he, however, is not able to get anyone in California, where the package disappeared, to call him back.

The person to whom I sold the iPad had another one disappear and you can imagine why I am convinced the iPad will never again be seen. So I tried to take things into my own hands but it has been frustration after frustration. The voicemail system at USPS is the worst I have ever seen. Navigating it is a nightmare. I spent an hour fighting with their website to file an insurance claim only to have the site crash when I went to file my report.

After the site crashed I decided I would, once again, try to speak to a live human being. Yet again I got trapped in their voicemail system. So after yet again fighting with the worst, most frustrating, most customer-unfriendly phone system I went to hunt down a shortcut to getting in touch with a person. I finally found a short video that offers a way to get a human being on the line. It all comes down to four numbers- 5422. Here’s what you need to do to speak to a human being at USPS.

I used this trick and did eventually get to speak to a living, breathing human being. Actually I spoke to three different people and each admitted that they know the phone system is horrid and the website is broken. I’m not optimistic I’ll see the iPad again and I suspect getting my insurance claim filled will take me weeks if not months, but at least I spoke to someone eventually.
Prev postNext post
Want More? Follow Us Here!