Apple Pay rolled out last week, and it’s already hitting some roadblocks as some retailers are blocking or not supporting it. This isn’t because they hate iPhones, it’s because they have a competing product — CurrentC — waiting. A few years ago, companies wouldn’t have dreamed of blocking a new Apple product, but competition has made it easier to say no. 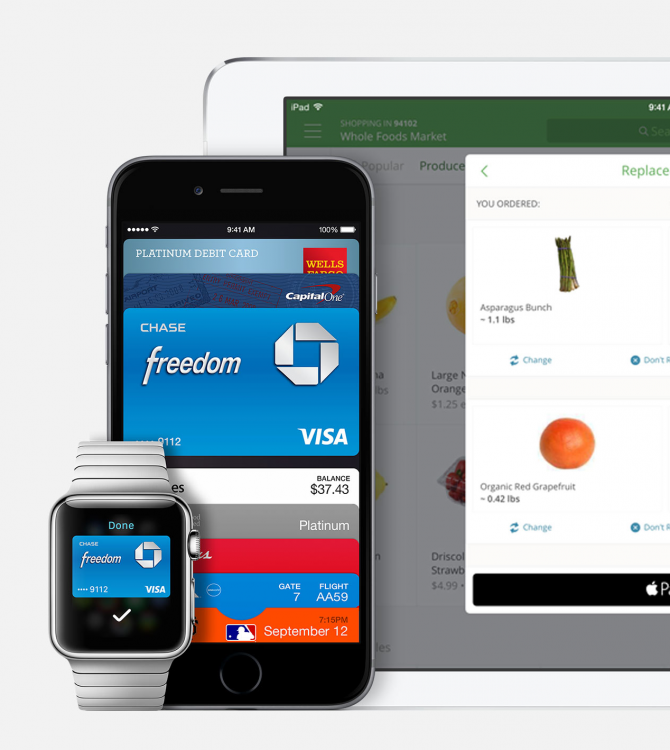 Let’s look at who is likely to be inconvenienced by CVS, Rite Aid, Walmart, and other retailers not supporting Apple Pay (or NFC tap and go payments in general, including Google Wallet, Softcard, etc.) Apple has sold around 10 million new iPhones worldwide. Let’s assume the majority were in the USA. Of those, only a small percentage at first are likely to trust or understand tapping their phone to pay for a transaction, and even fewer are likely to change where they fill their prescriptions or buy their groceries based on a service that rolled out last week.

On the Android side, there are several million Android phones out there with NFC and Google Wallet (and if they are on Verizon, Softcard). However, Google Wallet and NFC have been in phones for a few years now with very little traction, and Google hasn’t done much to promote the process. It seems like Google Wallet might get a lift if Apple Pay picks up, but there’s still the issue of raising awareness; if the average Android phone user doesn’t know their phone can do that, does it matter if it’s offered?

Then you get to the real reason CVS and Rite Aid actively turned off NFC at their terminals. They have a competing payment standard, called CurrentC (not to be confused with the snake oil product EmergenC). CurrentC goes directly to your bank, meaning it’s almost like an electronic check. Merchants love this because it cuts out the 2%+ they pay to Mastercard, Visa, Discover and Amex, plus it would allow them to capture significant amounts of information about how consumers shop. It also uses QR codes, not NFC, so in theory it has a wider base of potential users. Companies who are part of the Merchant Exchange (MCX) that is spearheading CurrentC have an agreement to not accept competing forms of payment like NFC.

I doubt the companies who turned off NFC terminals expected a major backlash, After all, on paper the only backlash is from a small handful of frustrated users. Assuming they thought this through, they thought they were only losing Apple users; there is no indication that Google would block CurrentC or remove it from the Play Store. Further, Google has no problem with Softcard and other competitors to Google Wallet being preinstalled on Android phones. If Apple were to ban CurrentC from the iOS App Store, there’s still a vast universe of Android (and Windows Phone and Blackberry) devices out there. This strikes me as a calculated risk that they honestly thought would barely ping on most user’s radar.

Instead, it’s banded Android and iPhone users together in their annoyance, and it’s brought a ton of bad publicity to CurrentC. The actual CurrentC platform won’t roll out until next year, but here’s how it seems it will work: you give CurrentC your bank account and routing number, along with your driver’s license number and social security number (they claim the latter two are just for identity verification). Then you do a complicated dance of opening an app, scanning a code, getting a code back, having the cashier scan that code, and then the retailer can debit the purchase directly from your bank account. This skips Mastercard/Visa and their fees, but it also means you’re losing the fraud protection that comes from both of those companies. You also need to trust that CurrentC will not have a security breach that reveals your direct bank and routing numbers, along with your personal identifying information.

It is hard to believe that the average, non-techie consumer is going to jump through those kinds of hoops just to avoid pulling out their wallet, simply because it is complex and sounds insecure; no matter how many ways MCX and CurrentC can swear they’re secure, the average person is going to shrug and use their credit card instead. Techies are going to hate it, because it’s far more insecure than Apple Pay, which uses a two-step authentication to prevent fraud. Even Google Wallet works with credit cards, so you have a far larger umbrella of fraud protection than CurrentC.

A few years ago, Apple was the kingmaker of new technology. As Android has grown marketshare, the innovation has been split among both platforms. It appears the merchants behind CurrentC thought this fracturing meant Apple’s influence had diminished enough that few people would care if Apple Pay couldn’t be used at certain stores. This seems to be backfiring badly on them, as instead there is a near-constant stream of discussion about how CurrentC is a poorly designed platform. And seriously, fire whoever came up with that name. Even if CVS, Rite Aid, and the others remain holdouts, this has brought more discussion and probably educated more consumers about NFC than if no stores had actively pulled their terminals down. Hopefully this proves to be the undoing of CurrentC, and that the increased discussion helps lead to broader Apple Pay/Google Wallet support!