In late 2012, along with 3400+ other people I backed a Kickstarter project called Instacube (which has since been renamed Hashtag Cube, or #Cube). The premise was simple: it was to be a stand-alone Android-based device that would wirelessly stream and display Instagram photos, when you could only view Instagram photos on iOS or Android devices.  I backed at the early adopter $99 level, and the wait began.

When I initially backed the Instacube project on Kickstarter, I wasn’t sure if it was something I would ever use myself, but I thought it would make a good gift if nothing else. Updates from the Direct to Marketing (D2M) team were being regularly made, and I figured that the project was on track.

Needless to say, as is often the case with products on Kickstarter, D2M didn’t deliver by the initially projected release date. Update #17, made on March 5, 2013 was my first real clue that there was a major problem; it was titled “Where the #@%* is my Instacube?!” Uh oh …

In that March 5th post, D2M promised delivery by July 2013. No problem for me; Instagram was only becoming more ubiquitous, and I knew that the Instacube would make a great Christmas gift for someone — or maybe I would be tempted to keep it for myself!

July 3rd brought the post “An Open Letter To Our Backers”, where D2M said that the money they had raised (over $620K!) wasn’t enough to complete the project, and they were now actively looking to raise capital “in parallel to development” because “the lack of funding stalled us.” D2M was out looking for new investors, hoping to raise “$250,000 to $350,000 for development and about $600,000 for the first production run. Additional money that we raise will be put directly towards completing the manufacturing engineering, software development, tooling and testing, and then towards buying components and materials for production and shipping the final goods to you.”

And that’s about the time when all hell really began to break loose amongst the backers.

I’m not a newbie when it comes to backing items on Kickstarter; I’ve had my share of disappointments in products that didn’t live up to my expectations and “oh well” moments, and I had just about resigned myself to the fact that Instacube was never going to be made. I figured I had just given D2M my $99, and that was the end of it. Even so, there were somewhat regular updates from the D2M team showing progress, but for the most part I just tuned them out as empty promises.

In April 2014 there was an update that Instacube was finally shipping; mine certainly didn’t.

In May 2014, a D2M post addressed the fact that many Kickstarter backers were displeased that Instacube was selling in retail outlets (like Amazon), but original backers still didn’t have their devices (!!). D2M said that “A key part of the startup process means that we have started to sell online and in retail via our distribution partners in order to drive additional revenue to fund more manufacturing of Kickstarter units. Our initial launch markets where you will see Instacube in retail is in Australia and New Zealand. While this may be frustrating to some of you, we hope you understand that the revenue from these sales goes directly towards funding the production of additional Kickstarter units and the faster that we scale, the faster that we can complete fulfillment to ALL backers.  Our immediate priority as a company is about completing the Kickstarter shipments and investing in the organization to further support you, not about near-term profit.” That was a real are you kidding me?! moment for a lot of the backers. Ugh.

As you can imagine, it was getting u-g-l-y in the comments section as backers were demanding their money back if they didn’t receive their purchased devices soon.

By this point, I had resigned myself to never getting mine. Oh well.

We’re making steady progress towards completing fulfillment to our backers and are working down the list.  We’re targeting to finish 100% of Kickstarter orders by the end of October if everything continues to go according to plan, but as we’ve learned, a lot of unexpected things can happen along the way and disrupt the best of intentions.

Here’s a very small sampling of the comments on the Instacube Kickstarter page; there are over 1100 of them, and I would say that the vast majority are negative: 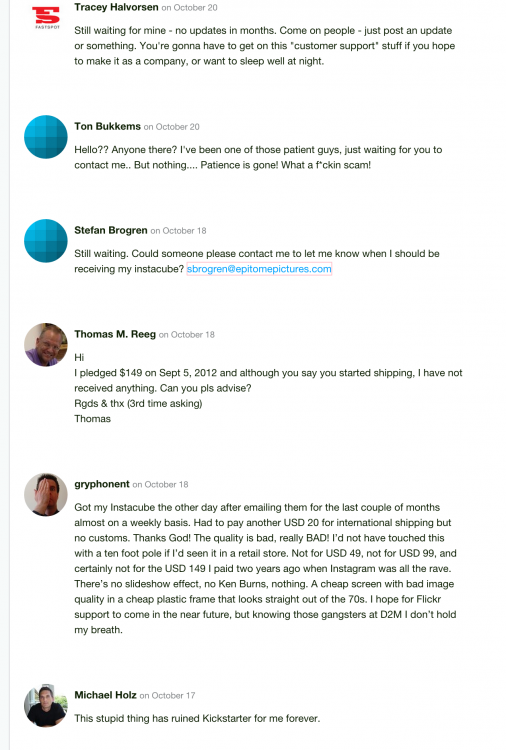 A couple of weeks ago, I received a package; inside was something I never thought I would actually see … an actual Instacube. 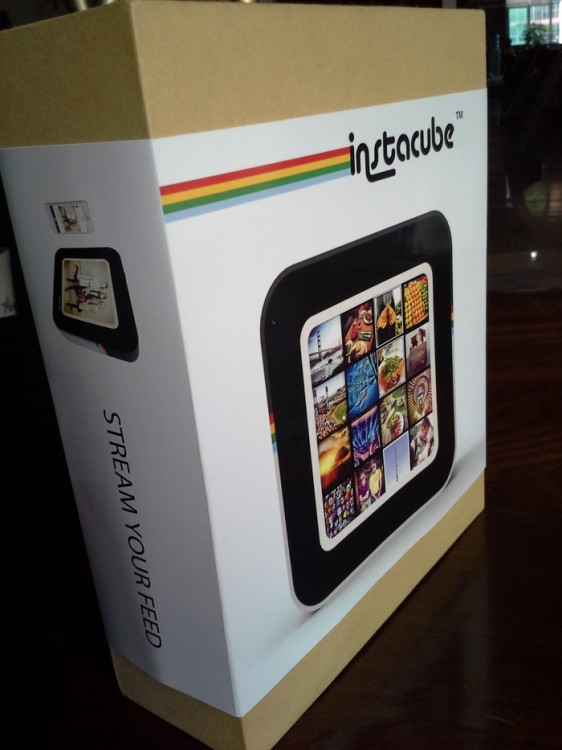 On the one hand, Instagram has actually become the social network of choice for Kev’s two daughters, so I knew there would be no problem figuring out who might like to receive this for Christmas — assuming it even worked. 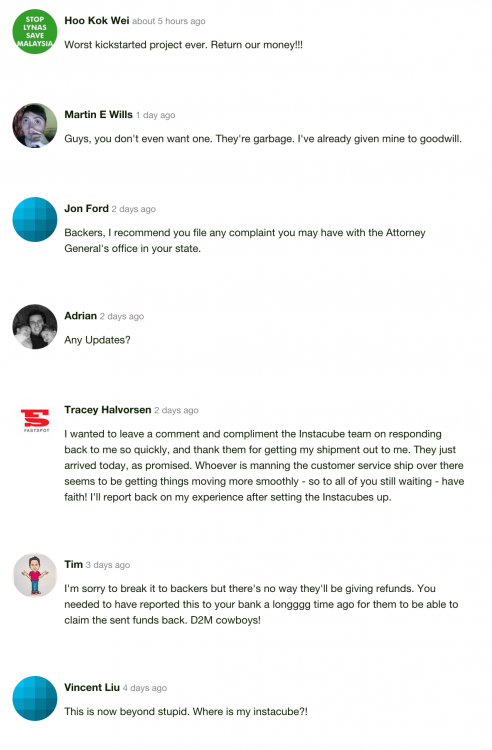 Meanwhile, many Kickstarter backers are still waiting on product fulfillment, yet the Instacube can be purchased on Amazon for $149 — including free shipping.  =/

Okay, so that’s the background on this product; hopefully I’ve established where I am coming from and that I actually bought mine.

Now on to the review …

The Instacube measures approximately 7.75″ wide x 7.74″ tall x 2.5″ thick, and it weighs 1 pound 10 ounces. It is composed of plastic, but for the most part it doesn’t feel cheap at all. I got the classic style, which has a retro Polaroid vibe that works well with Instagram and its styling. Inside the box you’ll find the recyclable materials holding the Instacube, a microUSB cable, and a wall charger. A little ziplock baggie holds warranty information, and instruction guide, and a paper reminding you to update your cube upon receipt and before using. 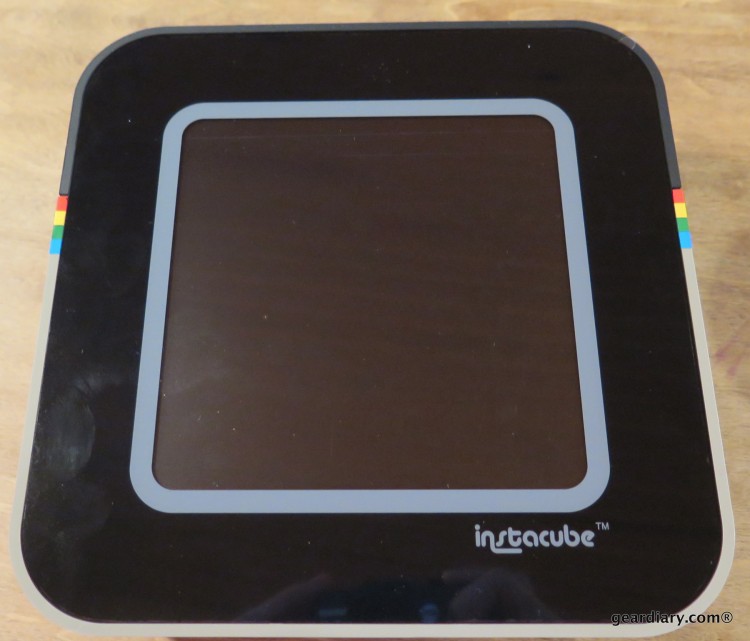 The sides of the device are plain, with no buttons or ports.

On the back you’ll find a microUSB charging port, a 3.5mm auxiliary cable port, and a small speaker. 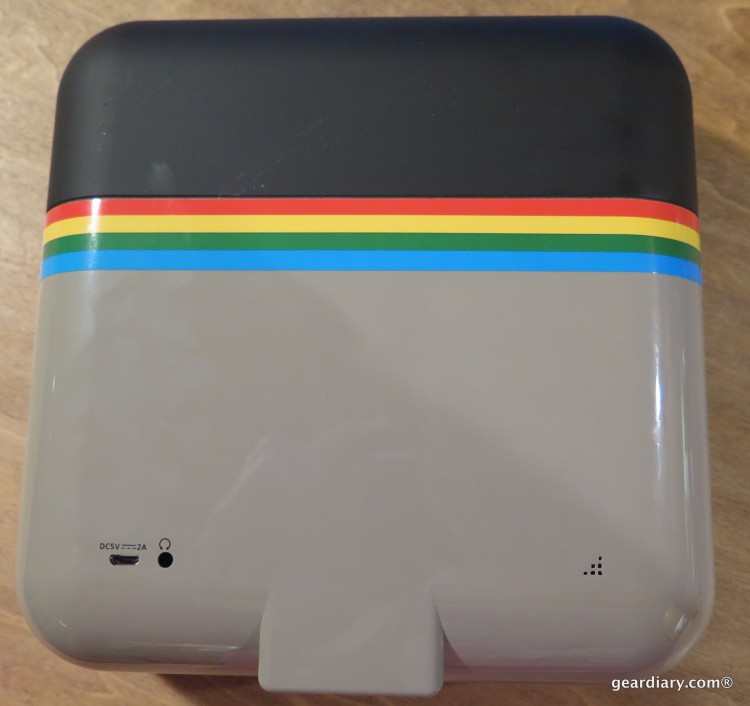 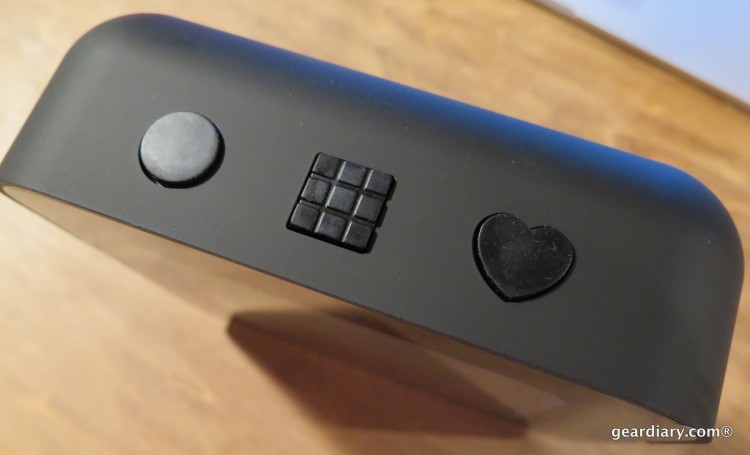 The screen resolution on the cube is not great; I would say it is on par with the typical digital photo frame.  The original specifications given on Kickstarter were as follows:

I don’t know if the specifications stayed the same once the project was completed or not, because there are no specs listed on the Instacube website. In any case, the device has a rechargeable battery that will last for several hours if you need to move it away from a power source, and I don’t believe that feature was listed in the original specs. 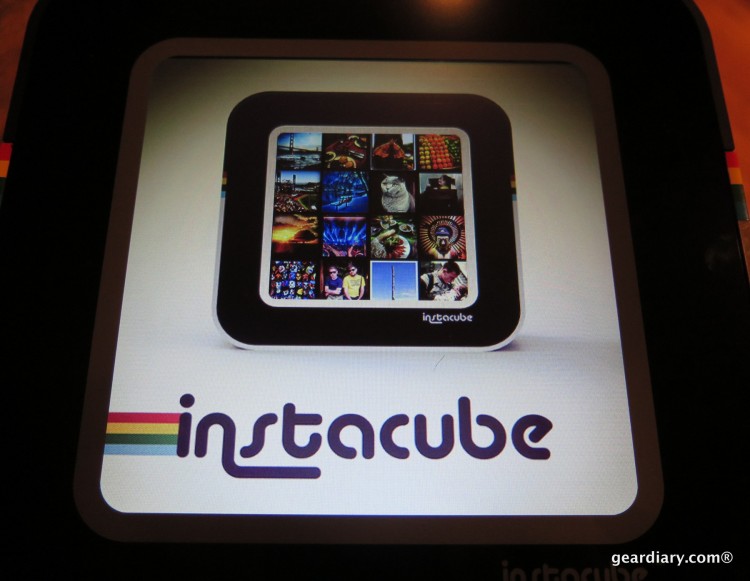 In order to get set up, you press the round button on the top of the Instacube. It will launch the screen you see above, and then it will let you know that you need to sign onto a network. The first thing you should do after that is to go to General Settings and hit the Update button. One your update has been done, you can sign into Instagram. 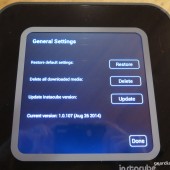 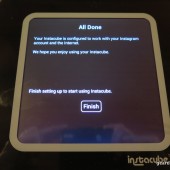 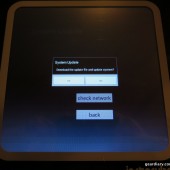 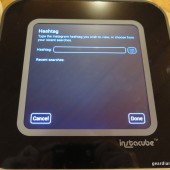 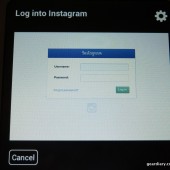 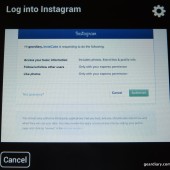 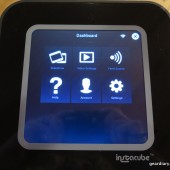 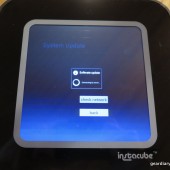 Pictures displayed on the Instacube are, for the most part, not bad at all. 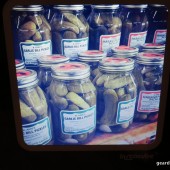 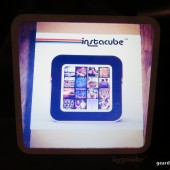 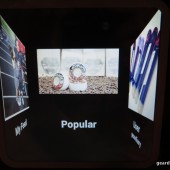 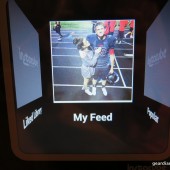 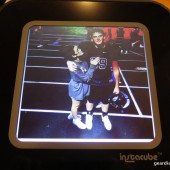 Navigation between your feed, favorites, liked library, popular on Instagram feed, your pictures (User), and a specific hashtags is done by pressing the grid button on the top and then touching the screen to scroll to the desired section. 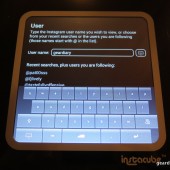 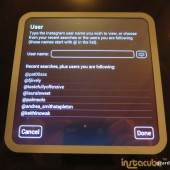 Since the pictures that are scrolling by are just the pictures — no captions or comments much less poster info — if you are curious about a photo you can swipe the screen to the left while it is showing to reveal the poster and other info. The screen can be slightly less responsive than expected, but it generally doesn’t take much pressure to get it to do what you want. 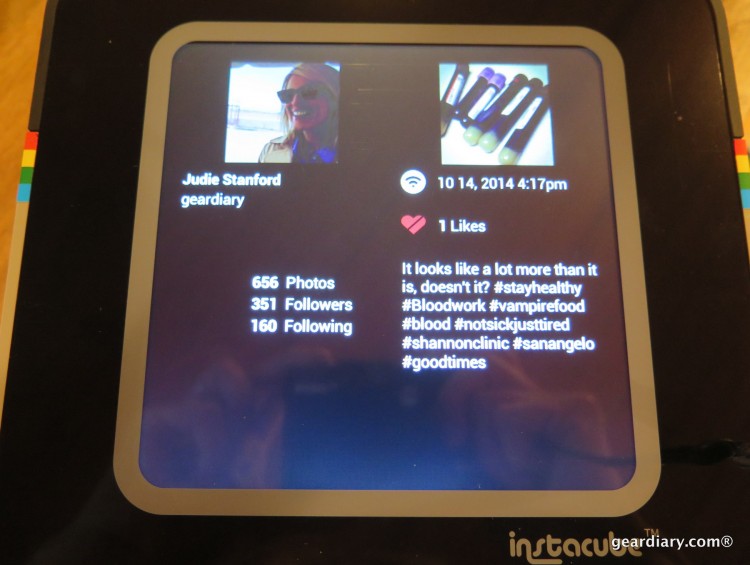 I have to admit that other than the fact that I waited over two years (!!) to receive my Instacube — and knowing that there are backers who still haven’t received theirs — I’m really rather impressed with it.

Yes, it took forever to get here, but once it arrived, the product was basically exactly as promised when I backed it on Kickstarter. Instagram has only grown in popularity since I first backed, so there is no issue with this being an obsolete product showing up after the fact.

The Instacube is cute, kitschy, and I suspect that it will be a big favorite this Christmas at my house. I just hope that all of the other backers get theirs soon, too. =/

The Instacube retails for $149, and it is available directly from the manufacturer or on Amazon

What I Like: Cute retro design for streaming your Instagram feed; solidly built device with several hours of internal battery life or you can use included wall charger; makes a great gift for anyone who really loves keeping up with their Instagram feed

Update: As of 11/14/14, Instacube will now be knows as Hashtag Cube or #Cube; this change comes with a new website, as well.