At the top of my ‘criticism of Android’ list for literally four years now is the abysmal audio support, leading Android music apps to be at best toys while iOS supports full studio production and mastering tools. Android isn’t there yet, but Samsung has led with audio support and IK Multimedia is taking full advantage with AmpliTube and iRig HD-A! 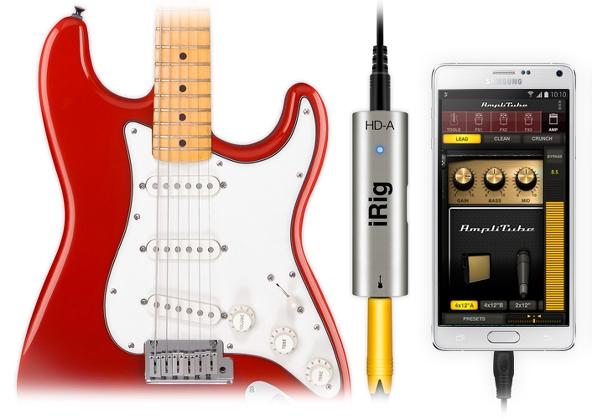 Recently Samsung announced the second iteration of their ‘Samsung Professional Audio SDK’, which allows developers to create virtual instrument applications with Android. You can connect and share audio devices and synchronize low-latency shared devices. Here are some features:
– Musical Instrument Creation
– API for creating professional instrument applications
– Support for all functions of the JACK Audio Connection Kit
– Plug-ins
– Plug-ins for acoustic piano, steel guitar and a standard drum kit
– Support for USB Audio devices
– Support for Audio input
– Usage of the real-time scheduler
– It can make a connection between apps at the SDK level
– It is easier to move to other apps and support its remote control

For more information on Samsung;s Professional Audio system and their apps, head to the Samsung Apps sites.

IK Multimedia has taken advantage of the new SDK and the devices supporting it to introduce Amplitube to Android users! We have heaped praise on Amplitube for years, and so it is exciting to see it come to Android – albeit in a very limited fashion! Here are some details:

Real time audio processing on Android
Previously not possible on Android devices, the AmpliTube app is now available thanks to the new Samsung Professional Audio system. Available on the new Samsung Galaxy Note 4 and Galaxy Note Edge – and soon to be available on the Galaxy S5, Galaxy Note 3 and other devices – this system allows users to process audio in real-time without perceptible latency. Now Android can support AmpliTube, which means musicians can enjoy real-time effects and instrument processing anytime and everywhere.

The new Samsung Professional Audio compatible devices come with Samsung SoundCamp, a free and full-fledged music studio app that lets musicians record and compose full songs entirely within the device. The AmpliTube app can be used as a standalone application but also as a plug-in inside the new SoundCamp studio for full recording and play-along uses.

To accompany the app IK has introduced the iRig HD-A, the Android version of the iRig HD released last year for iOS. You can use that or the standard iRig to connect your guitar to your Samsung smartphone and get started!

As noted, right now this is limited to the Galaxy Note 4 and Edge, but will soon come to other recent releases. I couldn’t find any information on Android tablet support – hopefully that is also coming soon!

The new iRig HD-A digital guitar interface is now available for $99.99, and you can get more information here. For more details on Amplitube for Android, head to the official site!

Here is the introductory video, showing the joy of plugging connectors into interfaces!