Huawei has been going from strength to strength of late, and the Huawei Ascend P7 looks to keep pace with the company’s ambitions. The latest flagship devices from Huawei are anything but cheap feeling, using a combination of metal, glass and high-quality plastic to give their devices a solid, premium feel. 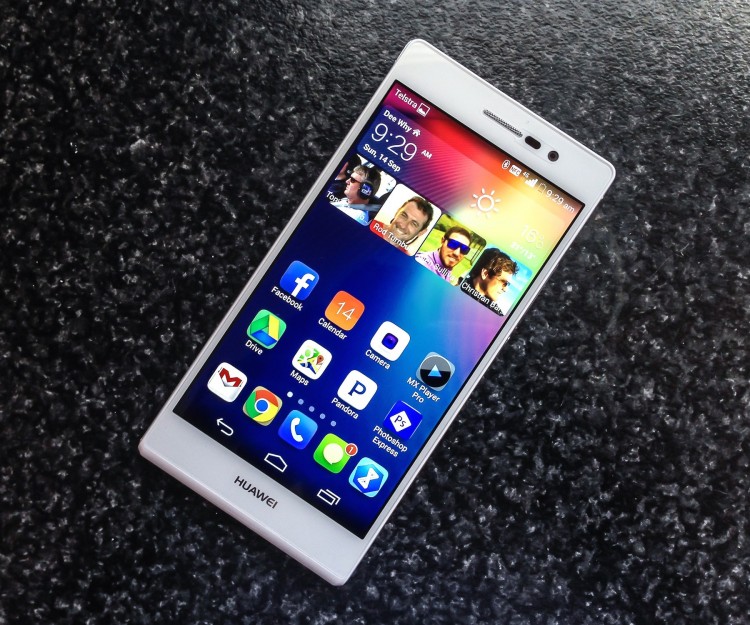 The Huawei Ascend P7 incorporates all three, with a Gorilla Glass 3 front and back panel, gloss plastic surround, and an aluminium band running around the top and sides of the device. It feels much nicer in the hand than plastic flagships like the Samsung Galaxy S5 and LG G3, though it can get a touch slippery if you’ve got cold hands. 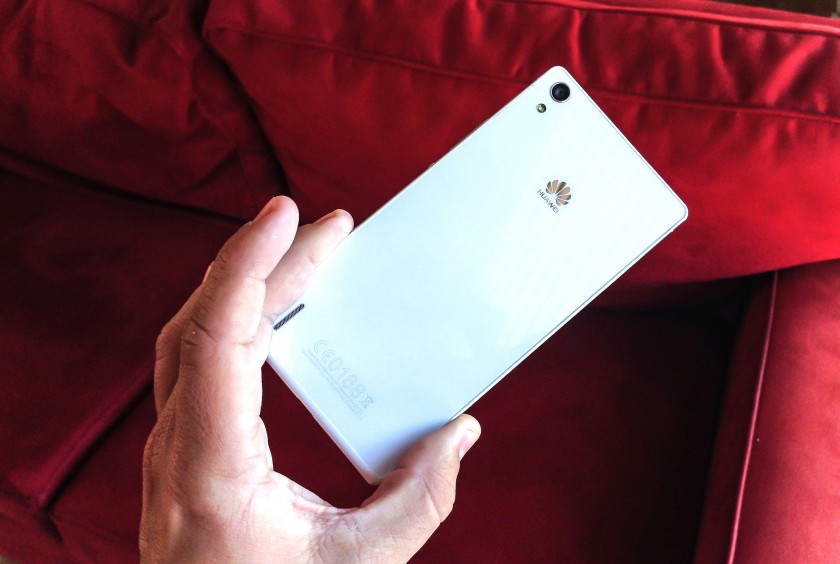 Along right side of the Huawei Ascend P7 are the volume buttons, circular power button, and two trays for microSD and microSIM cards. These trays are the only areas where the quality could use real improvement, as they aren’t flush with the side and aren’t very well colour matched to the aluminium band. 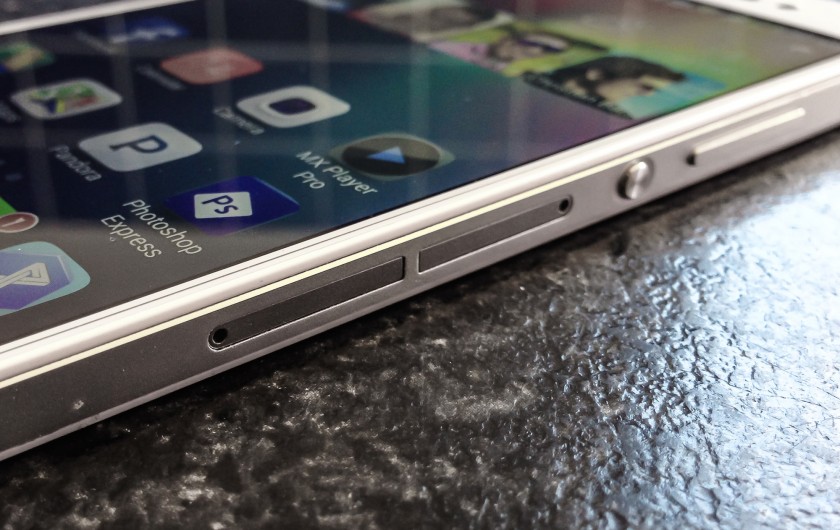 The bottom houses the microUSB connector and primary microphone, while the 3.5mm headphone jack and a secondary mic sit up top.

Its svelte 6.5mm thickness and ultra-thin bezels manage to disguise the fact that the Huawei Ascend P7 packs a 5-inch IPS display with 1080p full-HD resolution. This is a step up from the 4.7-inch 720p display on the Huawei Ascend P6 that preceded it, and it’s a welcome upgrade. 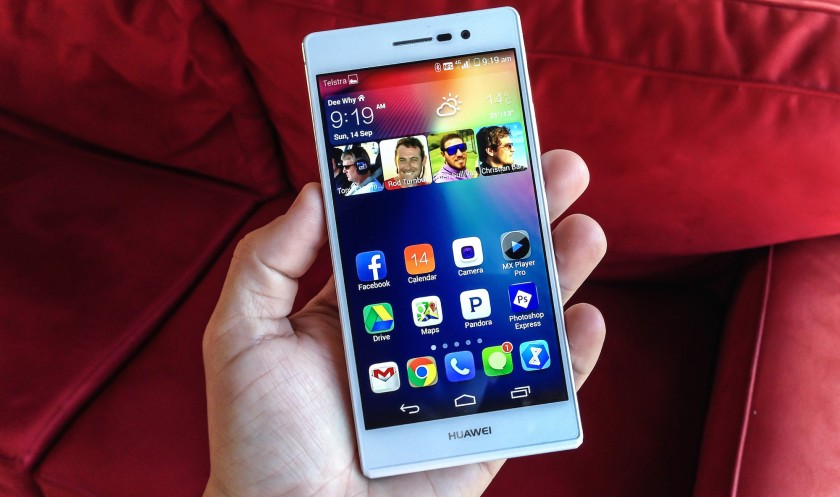 Colours are vibrant and brightness is very good, though its viewing angles aren’t quite as good as some other IPS flagships like the HTC One M8 or Sony Xperia Z3. Not any worse than the LG G2 from the previous generation of high-priced flagships though, in fact I think it’s a little better. 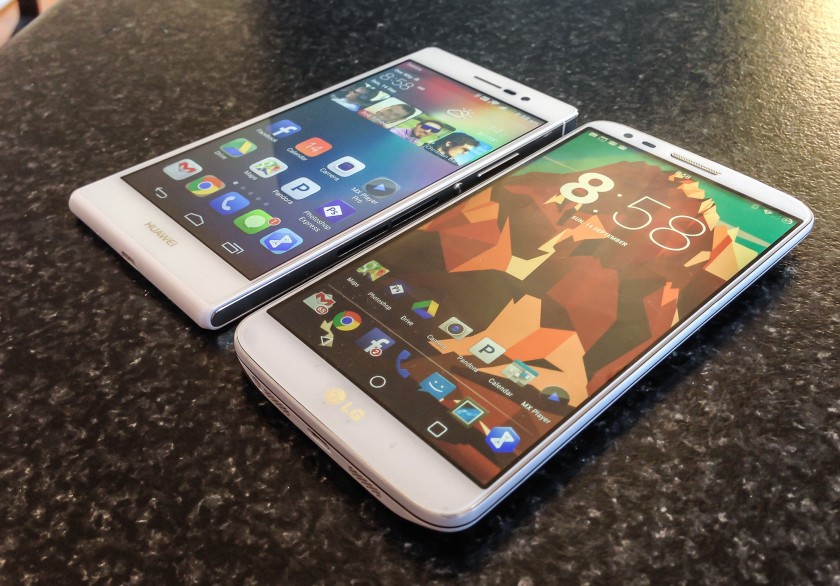 Huawei has trimmed down the bezels really nicely, making it quite easy to use one-handed even if you only have average-sized hands. The only other large-screened phone I’ve enjoyed using one-handed is the 5.2-inch LG G2, which is similarly slim-bezelled. 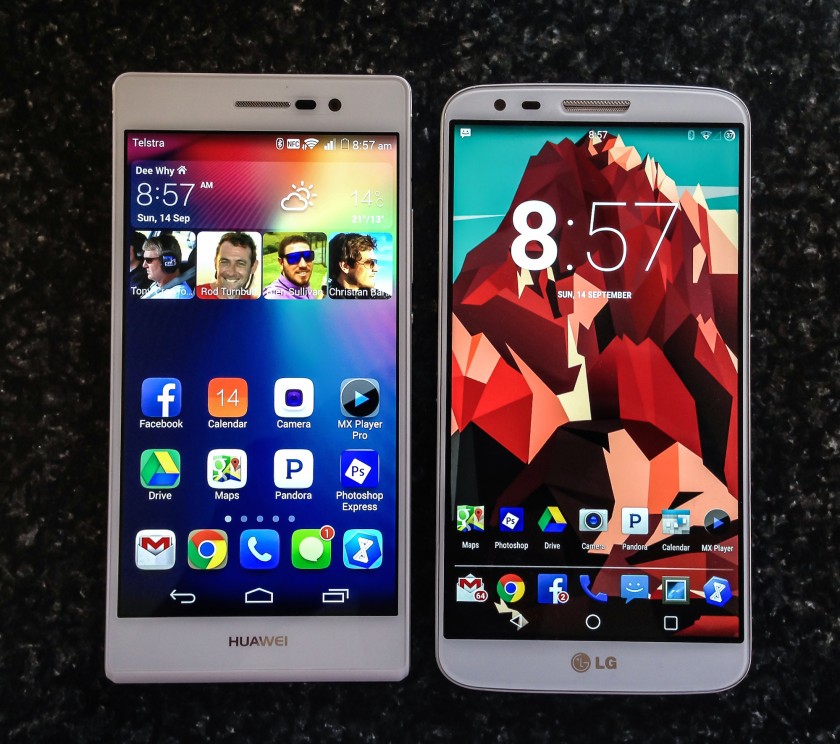 At the heart of the Huawei Ascend P7 is a HiSilicon Kirin 910T quad-core CPU running at 1.8 GHz. It’s paired up with 2GB RAM and 16GB of storage, expandable with microSD cards. 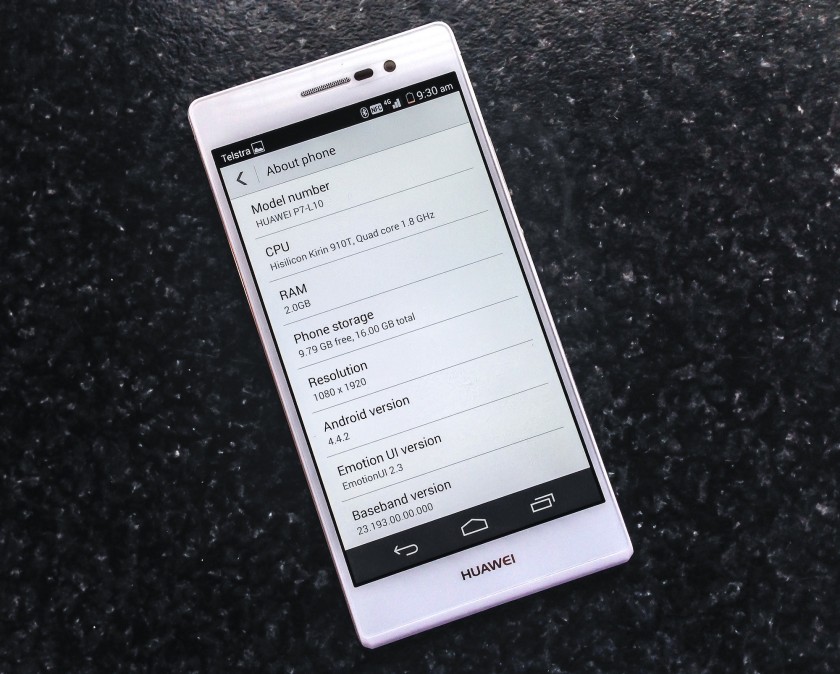 One of the biggest improvements over the Huawei Ascend P6 is the addition of 4G LTE rated at 150Mbps down and 50Mbps up.

In day-to-day use the data connection was responsive, though speed tests and large file downloads showed it’s not quite as fast as some other LTE devices. Compared to around 25/15Mbps on iPhone 6 Plus using the Telstra 4G network, the Huawei Ascend P7 always hovered around the 10/10Mbps mark. 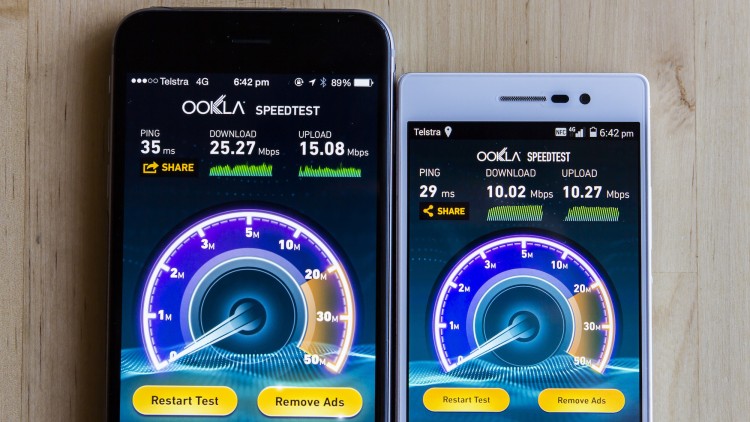 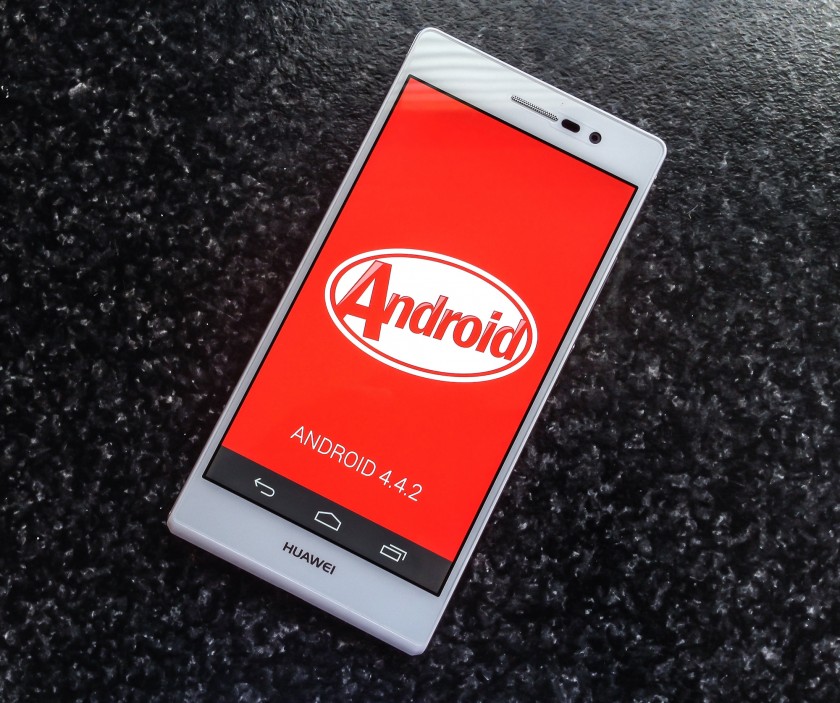 Emotion UI 2.3 is like a combination of standard Android and iOS, mixing the application launcher with widgets, rather than offering a separate application drawer.

The arrangement of all the home screens can be customised, and up to five applications or folders can be pinned to the dock at the bottom. 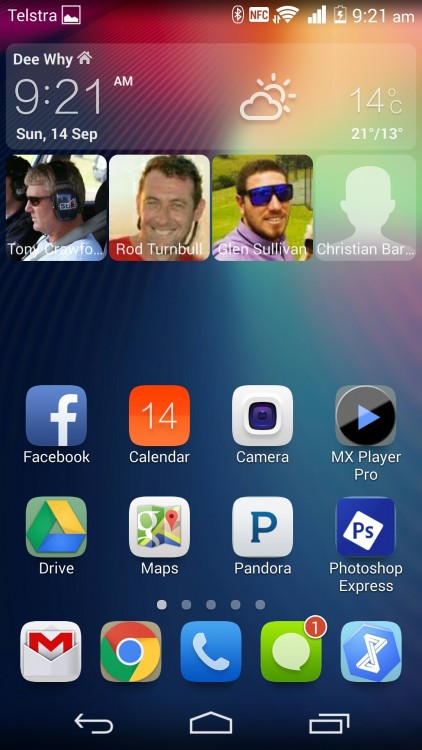 The notification shade includes five toggles for WiFi, Bluetooth, GPS, etc. which expand to show a total of 15 plus a brightness slider. The arrangement of these toggles is adjustable so you can have your most-used five always displayed when the notification shade is open. If you’d prefer a clean shade, the toggles can be disabled altogether. 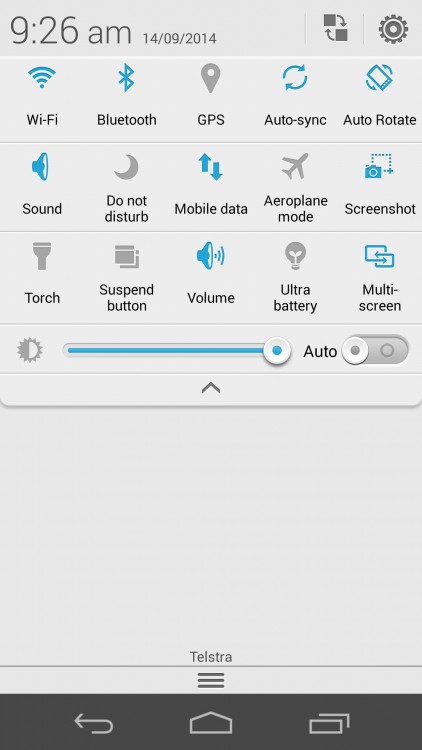 As far as changes to Android go, Emotion UI is one of the better ones for the average user, offering a simplified interface and settings menu. Occasionally the colour palette and icon choices are a bit immature, something that will hopefully be rectified with the Emotion UI 3.0 update that is currently in beta testing. Unfortunately we couldn’t get the beta to load onto our P7. 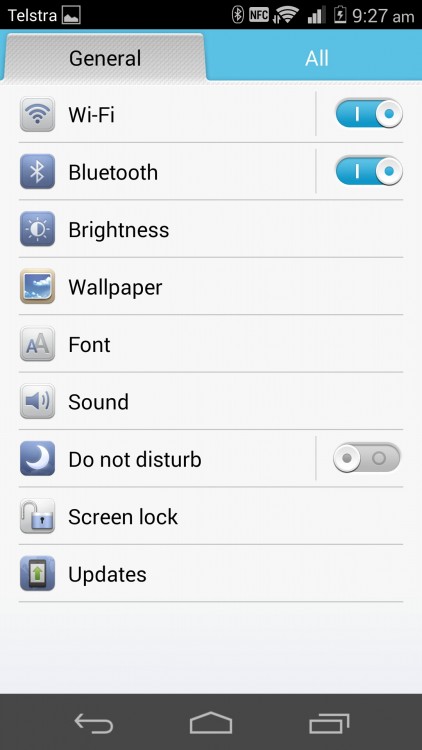 A very nice addition to the standard software package is the Swype keyboard, a positive step up over the keyboards included on many Android devices. 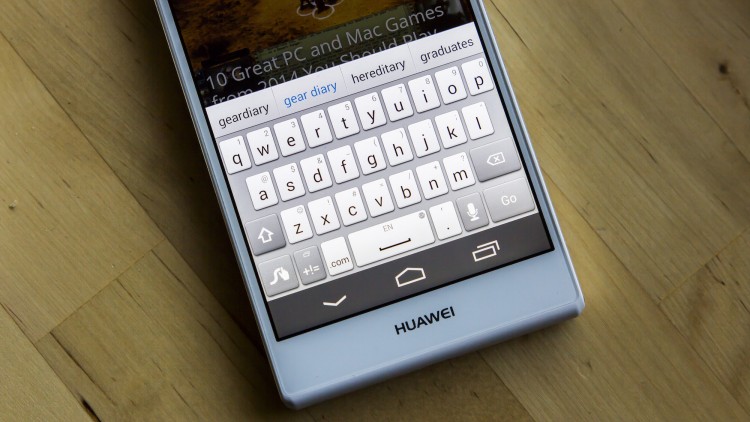 Performance on the whole was quite decent, though the first review unit I received had an early software build that was decidedly less slow. It would often inexplicably pause before continuing the task at hand, something a replacement unit rectified. 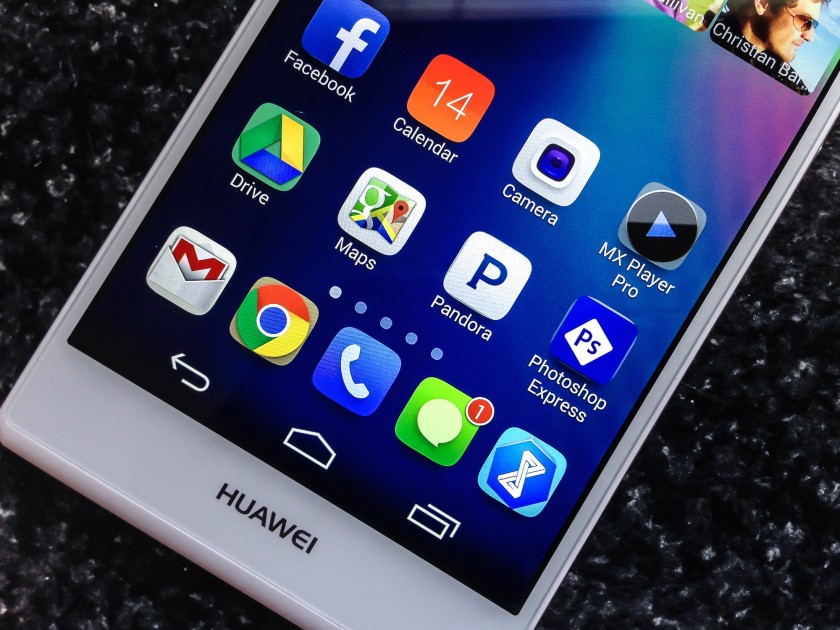 Multitasking performance was again decent, though swapping between multiple heavy apps like Google Chrome and Maps took longer than on other flagship phones with faster CPUs. 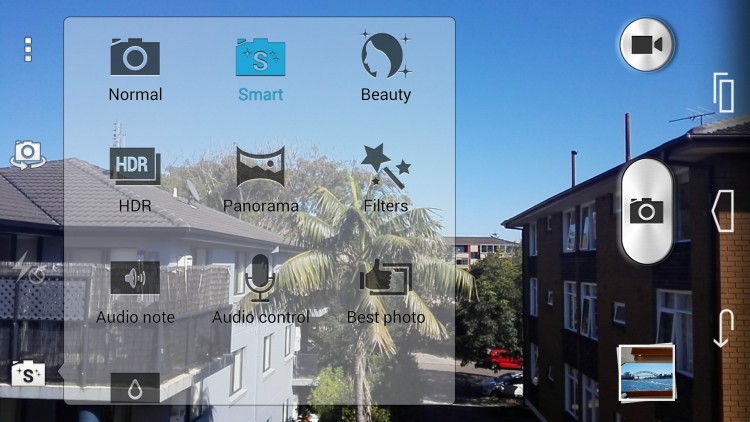 The Huawei Ascend P7 sports two high-resolution cameras, a 13-megapixel around the back and an 8-megapixel selfie-shooter on the front. 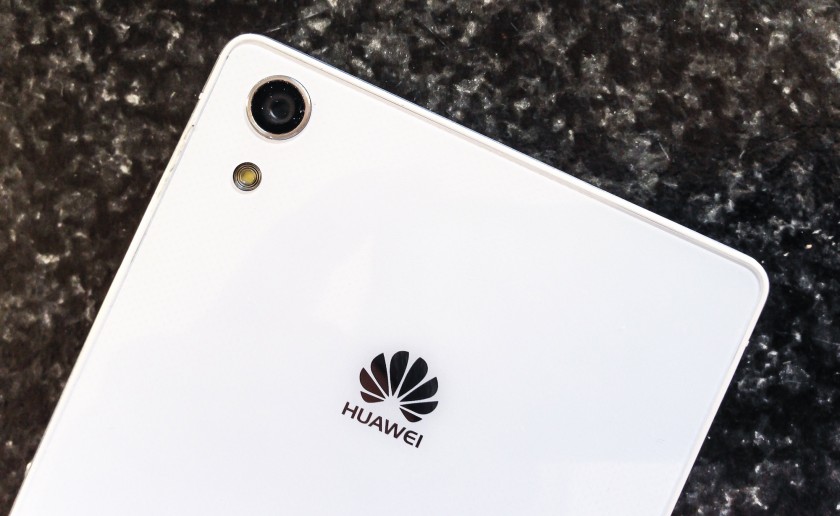 Photos taken on the Huawei Ascend P7 show a good level of detail, though the image processing tends to over sharpen the images which has a tendency to exaggerate the noise. A little help from Photoshop Express improves the images, but it would be great is the noise reduction was a little better right out of the gate. 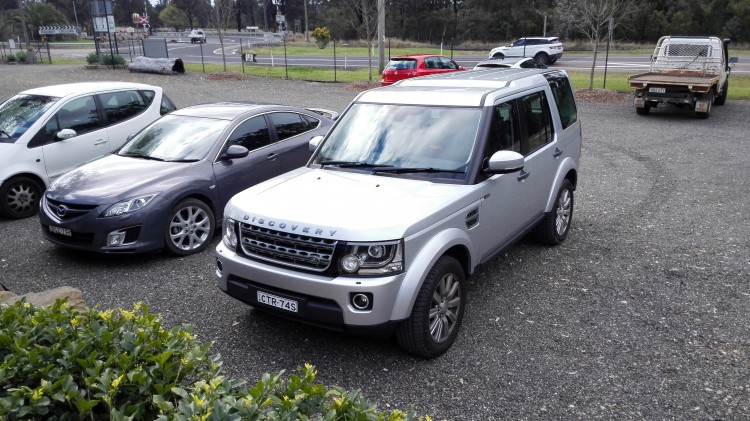 Nice colours, but the bonnet blew out. 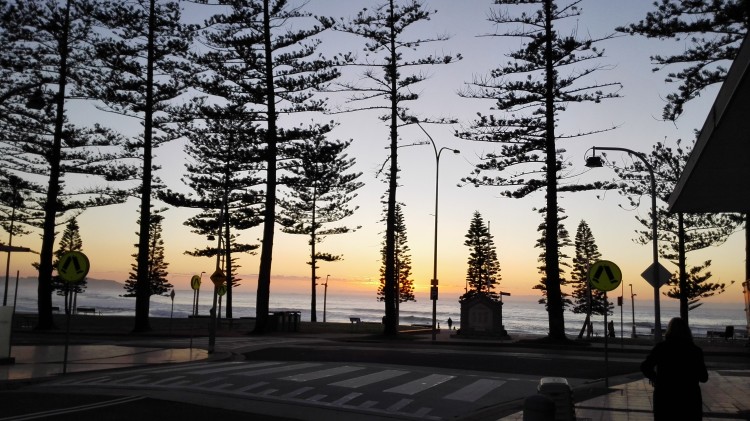 This sunrise fared pretty well though

In daylight colours are vibrant, and the resolution means there is more than enough data for posting good-looking shots to Facebook or Instagram, though a little more dynamic range would be appreciated. Highlights in particular get blown out quite easily. 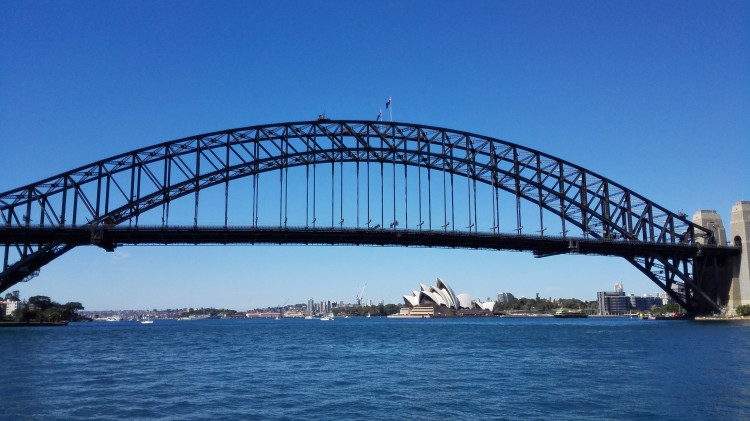 Sharp but a bit of noise is creeping into the gradients. 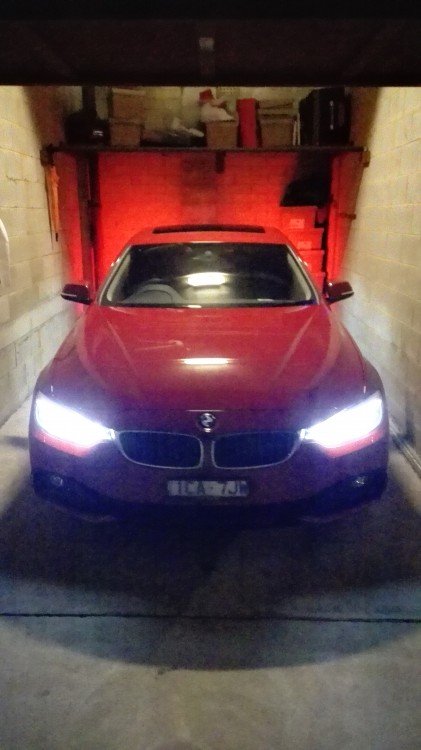 This shot was taken in a pretty dark garage, something the P7’s camera isn’t a fan of.

The front-facing camera has an extra software trick up its sleeve, a “beauty” mode that is supposed to enhance your selfie-shots by smoothing out wrinkles and other imperfections automatically. 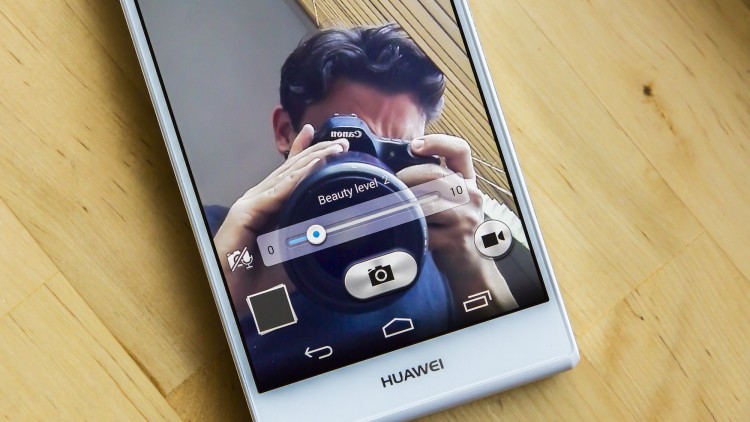 To be honest it doesn’t work all that well, adding a strange soft glow to your face that makes it look like something has been smeared across the lens if you go any higher than two on the scale of 0-10. 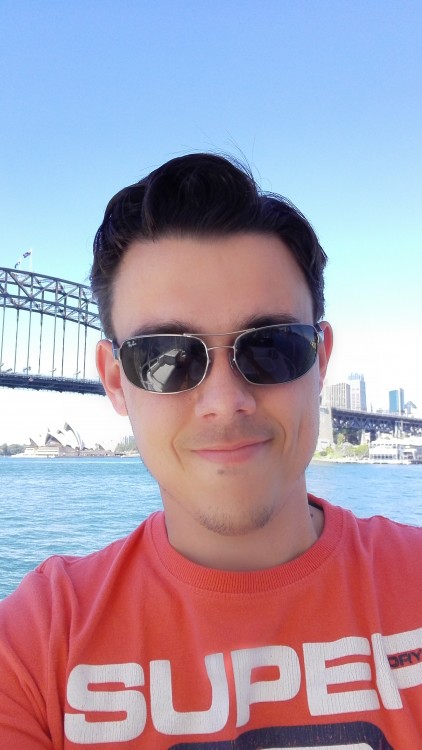 Restraining the use of the beauty mode actually results in quite decent shots, again thanks to the resolution they will look good if you social them. 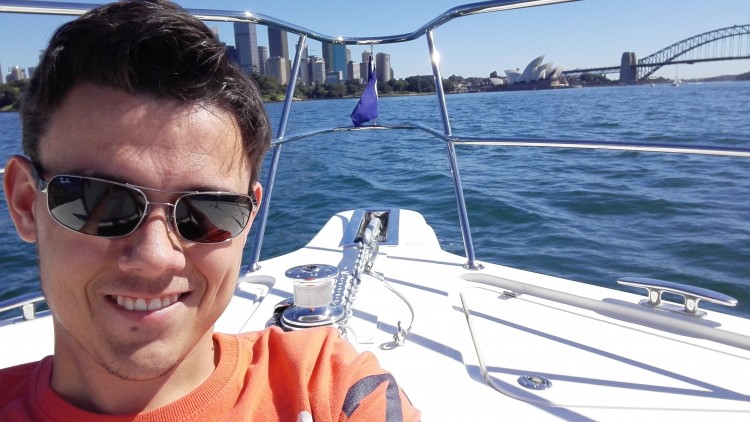 Selfie with no beauty mode.

Phone call quality was very good, with callers able to hear me clearly even in louder environments, while they were easy to hear through the earpiece. The speakerphone isn’t great, largely due to the single rear-firing speaker that doesn’t get particularly loud.

Huawei managed to pack in a non-removable 2500mAh battery into the Ascend P7’s svelte frame, which was quite easily able to manage a day off the charger. I spend at least 2 hours surfing the web, an hour watching videos, 30 minutes on the phone, and over an hour streaming music via Bluetooth each day, and I didn’t have difficulty making it from morning through to the evening. 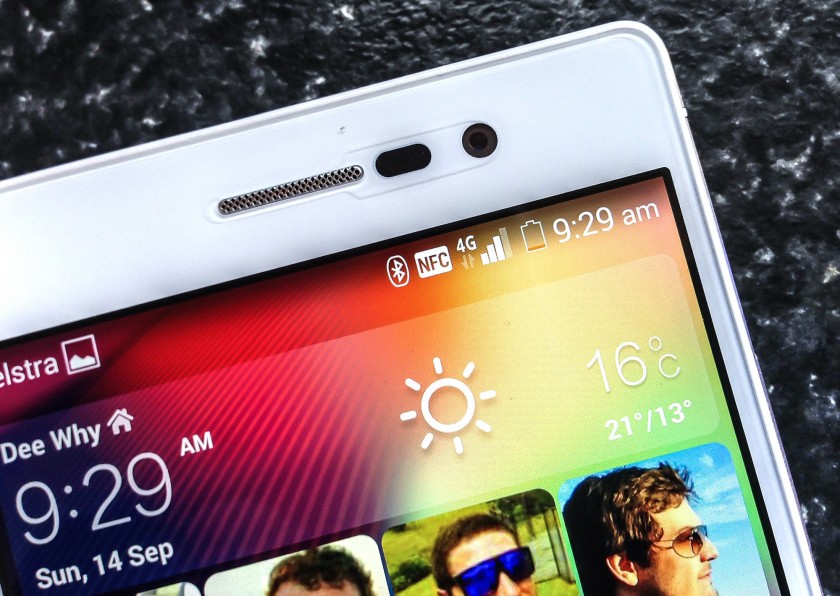 At AU$549 off contract it isn’t exactly cheap, but if you’re looking for solid build using quality materials, a nice 5-inch 1080p display, and a very sleek profile that other manufacturers could learn from, the Huawei Ascend P7 has plenty to offer.

What Needs Improvement: Performance could be better, Emotion UI a touch too colourful, camera tuning.