One thing I love about using IK Multimedia gear is how it enhances my ability to make music anywhere by drawing power from the 30-pin or Lightning port of my iPhone or iPad. The obvious problem is the power used by an accessory such as iRig Keys Pro comes from your phone, lowering already precious battery life. Enter iRig PowerBridge. 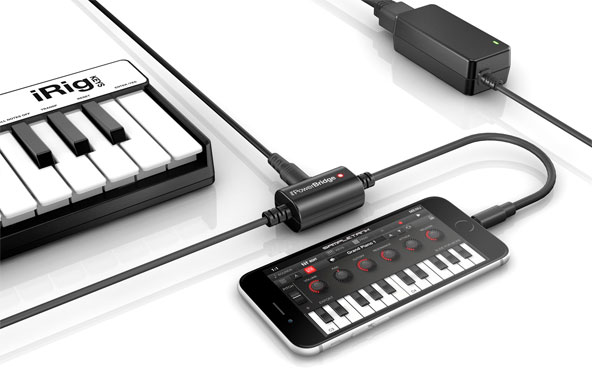 While iRig PowerBridge doesn’t magically stop devices from consuming power, but offers an alternative. What iRig PowerBridge offers is the ability to plug your iOS device into an outlet and STILL use an iRig device to make music. It is compatible with pretty much all 30-pin or Lightning digital IK gear — like iRig Mic HD, iRig HD, iRig Keys, iRig PRO or iRig MIDI 2. Here are some of the details:

A streamlined solution The reason IK Multimedia’s iRig range of digital interfaces, microphones and controllers are so popular among musicians is because they offer the highest quality sound in every mobile situation. IK’s iRig accessories are able to accomplish this because they connect via the 30-pin or Lightning connector of an iPhone, iPad or iPod touch. While this offers significant advantages in terms of performance, it comes at the expense of battery life — with an accessory connected, it is impossible to perform for an extended period of time without recharging. iRig PowerBridge is an elegant solution to this problem.

iRig PowerBridge combines a power supply and an ultra-low noise power conditioner that connects to a power outlet on one end and a Lightning or 30-pin iPhone, iPad or iPod touch on the other. Between both ends is a female Mini-DIN connector that can be used to connect any digital iRig accessory with a Mini-DIN or Micro-USB port. Through this connection, iRig PowerBridge allows continuous charging while also passing along audio and MIDI information between the digital iRig accessory and the iPhone, iPad or iPod touch.

Through this streamlined setup, musicians can keep their iPhone, iPad or iPod touch charged and play with their favorite digital iRig accessories and powerful IK apps for as long as they want, whether they’re performing on stage, recording in the studio or just jamming at home.

Effortless portability, intuitive use iRig PowerBridge has been designed with portability in mind. It sports a lightweight and compact enclosure that musicians can easily carry in their gig bag of choice. Available as either a 30-pin or Lightning version, it connects quickly for use and features an LED that provides at-a-glance visual feedback while charging.

Pricing and availability iRig PowerBridge comes in two versions — one for Lightning and one for 30-pin. Each version will cost $69.99, and are available for pre-order now. iRig PowerBridge will ship later in Q1 2015 from from the IK online store, as well as music and electronics retailers.

To see the official video of iRig PowerBridge in action, go to: www.irigpowerbridge.com/video