One of the best, most original and unique games for the Nintendo DS was “The World Ends With You”. Square Enix delivered excellent single-player iPhone and iPad versions called ‘Solo Remix’ in summer 2012 for an audience-limiting $17.99/$19.99. Now a game-killing iOS 8 bug has been identified, and it isn’t clear if it will be fixed. 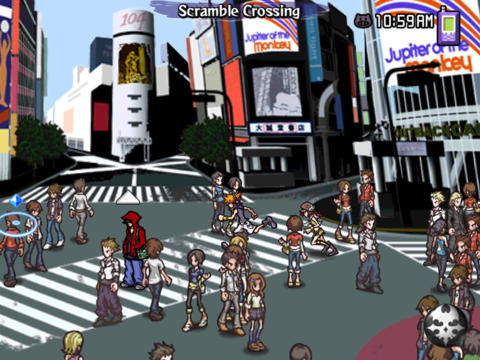 [UPDATE: Since releasing the initial report Square Enix has reached out to TouchArcade and said:

they apologized for how long it’s taking, but said that the update was proving more complex than they had originally anticipated. They can’t provide an exact date when the update will be made available, but it will in no uncertain terms be getting patched.

So … let’s hope this really happens! It is a great game.]

The controversy came up after it was noted that iOS 8 gamers were encountering a game-killing bug. After notifying Square Enix, the following appeared on the iTunes listing:

“We have confirmed a bug that prevents this game from running properly on iOS 8, and are currently investigating the matter. We humbly ask for your patience and understanding until the issue is resolved.”

OK, that sounds reasonable enough, right? Well, the problem as noted over at TouchArcade is that in spite of that assurance, gamers who contacted Square Enix directly got a slightly different response:

“Unfortunately we have been notified that this title will not be receiving an update to be compatible with iOS 8 and forward. For this we and the development team deeply apologize. We can only suggest that you play the game on an iOS 7 or earlier device at this time.”

If you check out the iPhone or iPad listings you will see that the game calls for ‘iOS 4.3 or later’, and that even from an iOS 8 device you can buy the game without a problem … the problems only start when you try to play the game!

This is definitely an issue with games that have to deal with operating systems that receive significant updates. For example, the classic Civilization IV doesn’t even launch on the latest Mac OS X version… whereas I can easily load up The World Ends With You on my Nintendo DSi.

But the conflict between what Square Enix is saying on the app page compared to what they are directly telling customers is cause for concern. They should either fix the app, pull it, or at least make it very clear that it will NOT work with iOS 8 and will NOT get a patch … but really given the high percentage of iOS 8 adoption they should probably just pull the app until they fix it … or just forever.

From my perspective, if you are new to dealing with Square Enix you might say something similar to a line the character Neku uttered in The World Ends With You:

Full of fail, as usual.