In an unsurprising announcement, IDC revealed their latest smartphone sales research indication that iOS and Android accounted for more than 96% of smartphones sold worldwide for both the fourth quarter and for the full year of 2014. Everyone else? Once again they were left scrambling for table scraps – not just in sales but in profits as well! 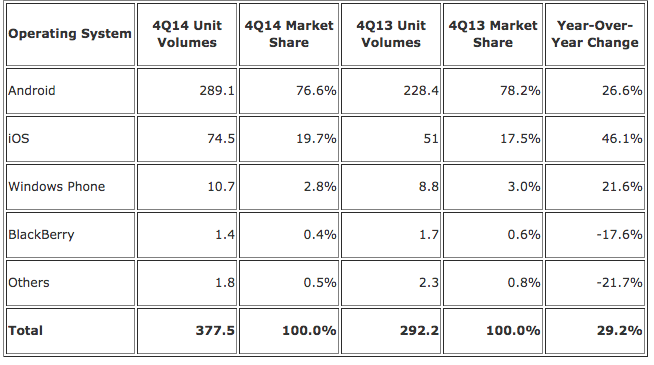 The new numbers from IDC were reported at MacRumors amongst other places, and here are a few things of note:

As noted, iOS and Android accounted for 96.3%, leaving Windows Mobile, Blackberry and ‘others’ to account for the rest. ‘Others’ outsold BlackBerry, and while Windows Mobile saw a slight uptick in sales numbers, market share dropped from 3.0% to 2.8%.

Full Year 2014
Android had a really good year in 2014, according to IDC. The platform saw shipments breach the one billion mark for the first time. Android vendors pushed out 1.059 billion smartphones, a 32% jump from the 2013 shipments of 802.2 million. Samsung remained the leader in Android shipments, but those remained flat as low-cost vendors chewed up its marketshare in the entry-level segment. In total, shipments of Android devices account for 81.5% of the market, up from 78.7% the previous year.

Despite the huge impact of the iPhone 6 and iPhone 6 Plus on shipments of Apple’s smartphones in the fourth quarter, for the full year the iOS platform saw a decrease in market share. Volumes rose 25.6% from shipments of 153.4 million in 2013 to 192.7 million in 2014. Even so, its share dropped from 15.1% to 14.8% thanks to the surge in Android shipments.

Show Me the Money!

The most basic rule of business is that sales are the money you take in, but profits are what is left after paying all of the bills. History is littered with companies who managed to grab sales at the price of profits … and soon met their demise. That is what the smartphone landscape looks like right now.

For Q4 2014, Apple had 93% of smartphone profits, Samsung had 9%, HTC/BlackBerry/Lenovo/Motorola/Xiaomi/etc all had ~0%, and Microsoft had -2%. For the full year Apple had over 89% of profits, with Android getting ~11%, and others losing money.

This is a significant jump for Apple – and more importantly a significant decline for Samsung. Samsung’s share of profits are the lowest since 2008, back when Nokia and Blackberry ruled the roost!

Why does it matter? Why do you even have to ask … look at it as a household budget. No matter your income, if your expenses outstrip what you bring in, you are not saving money – nor are you going to be able to make long-term investments without pulling out the credit card. More to the point – Samsung isn’t just a smartphone maker, they are a huge semiconductor business … and Apple NEEDS Samsung because no one else has consistently supplied them ASICs and memory and custom processors of the necessary quality and quantity.

What About Everyone Else?

As I saw in one report of the numbers “The race for third place is hardly a race at all.” 2015 was supposed to be the year Windows Phone overtook iOS and became a real challenger to Android which was supposed to have about 50% share. Ha! Instead we have an 80/20 mix of Android and iOS products, with Android most strongly entrenched at the low end and iOS completely dominating the high end (as the relatively poor sales performance of the Galaxy S5 illustrates).

Blackberry and Firefox OS and other devices are all marginal players unlikely to grab any amount of share any time soon.

And Microsoft? Their biggest success so far is the Surface tablet, which is much more of a convertible touch-screen laptop than anything else. Their phones – the Nokia line – are nice and well designed, and the OS is usable and efficient, but they face problems on the high and low end due to a lacking ‘use case’ compared to iOS or Android.

2014 was a huge year for Android and iOS in a number of ways – Android continues to be the ‘go to’ phone on the low end and to an extent in the midrange, but also continues to struggle at the middle and upper price points, with those areas being dominated by Apple. I don’t see anyone disappearing or being ‘doomed’ in 2015, but we might get some consolidation of smaller vendors. Specific thoughts:
– Apple: keep on keepin’ on. I would love to see Apple be less predictable, do something other than an ‘iPhone 6s’ this fall … but I doubt it will happen. I think that advancing their iPad platform and consolidating the great Mac position are bigger items for this year.
– Samsung: make money. The ‘battle Apple’ approach has Samsung bleeding money, and Xiaomi in particular is eating their lunch at the low end. This needs to change.
– HTC / LG / Moto: get REAL people to care. We see great reviews and awesome comments … but actual phones in consumer hands? Very rare.
– Xiaomi / Huawei / Lenovo: continue doing what you’re doing … you’re absolutely killing. And the competition is the type of thing that will benefit consumers.

What Are YOUR Thoughts?