Michael Siebenaler and Michael Anderson are looking to “go ape” over the new rhythm platform game Jungle Rumble on the PlayStation Vita. This rhythm-based game utilizes the PlayStation Vita’s touch controls and capabilities well. The Mikes weight in on this recent PlayStation Vita port of the 2014 iPhone game. Let’s take a look! 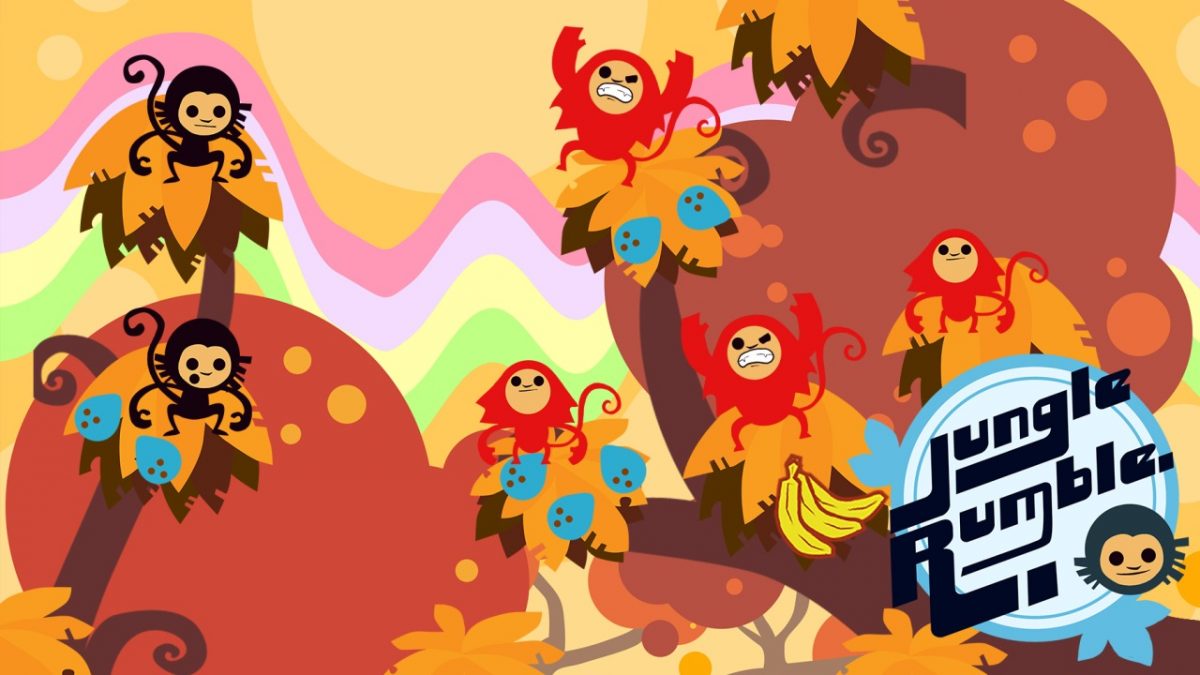 In the game, players assist the Mofongo tribe of monkeys as they battle rival primates invading to steal precious bananas.  However, the Mofongo soon realize their monkey neighbors are being invaded themselves because humans are destroying the vibrant rainforest both groups call home.  The Mofongo then confront the true evil ravaging their land to reclaim tropical paradise.

Keeping the beat and making quick decisions are essential to resolving this monkey business!  Gamers drum on the screens of their Vitas in time with the dynamic music to command the Mofongo tribe.  While drumming, players must also employ strategy and decide where monkeys move and who they should attack.

Drums and monkeys? Sign me up. Ever since my youth, my two passions increased then solidified even more when combined with video game passion, especially after playing the simian Ape Escape game series then other drum-themed games like Drummaster and the Rhythm Heaven game series.

This rhythm-based puzzle game Jungle Rumble puts players in the position of “great spirit” who controls the Mofongo monkey tribe who face several obstacles including the enemy red monkeys from taking the Mofongo’s precious commodity – bananas. . The challenges can be high but the music rewards are great.

This rhythm-based puzzle game puts players in the position of “great spirit” who controls the Mofongo monkey tribe who face several obstacles including the enemy red monkeys from taking the Mofongo’s precious commodity – bananas. The challenges can be high but the music rewards are great.

Adversaries and challenges increase as players progress through the game viewing it in the required vertical screen orientation. This orientation helps player concentrate solely on tapping motions instead of the PS Vita control buttons. Headphones are optional, but recommended by the game.

Jungle Rumble begins with a short tutorial (alternating spots to move; three times on the monkey then one on the target to throw coconuts, etc.).

The touch screen controls accommodate left-handed and right-handed players. Players move to the rhythm to jump positions, throw coconuts, and other actions. After a 1-2-3-GO assisting visual, gameplay initiates following a four-count beat.

Cute monkey sounds and pink-colored outlines on each spot confirm player actions while the top row of circle visuals act as a guide to keep players on the beat. Each action begins when the moving circle visual (think karaoke) starts at the far left then moves right.

The screen moves down as players go through each level. Don’t worry, even when managing the monkey minions overwhelms, developers keep players in the game by just stopping the screen movement instead of squashing the monkey like a banana and ending the level.

Players can achieve varying performance levels (silver, gold, etc.) based on the length of time it takes the player to complete each level. 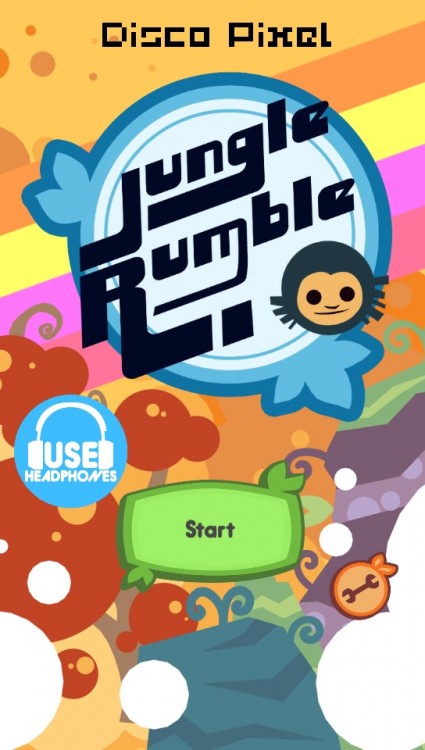 I am just going to be up front – my opinion about Jungle Rumble is not as positive as Mike Siebenaler!

Jungle Rumble is a rhythm puzzle game for the Playstation Vita that utilizes the touch screen exclusively. If that makes you think – hey, that sounds like a ‘phone game’ … you’re on the right path. This game is an updated port of an iPhone game from 2014, selling for not much more than the original iOS game.

Similar to Mike S., I have enjoyed rhythm games for many years on portable game machines, going back to Elite Beat Agents on the DS in 2006. So when I got a look at Jungle Rumble I was thrilled to check it out! Enthusiasm quickly waned and was replaced with annoyance and disappointment. Perhaps I should be happy that the game is short and there was little pull to replay?

First the good stuff – the game looks gorgeous! The graphics are light and fun, and the style is entertaining. The backgrounds and overall design aesthetic are a delight. The music and beats are enjoyable, the characters are cute, and the overall premise is pleasant and simple to get into.

And the puzzles – tracking enemies, optimizing move patterns, solving things in the best way possible – are the highlight of the game. It is interesting and engaging and well designed – and you can often see alternate approaches too late to execute, leading to the desire to replay a level to do it better next time.

This all sounds great, right? Not so fast – let’s talk about everything else.

First off you have to hold your Vita like a smartphone, which is not all that fun or comfortable. If I wanted to play a smartphone game, I would play it on a smartphone. Speaking of which, I found the focus on touch-only problematic for a couple of reasons. One is that the touchscreen on the Vita doesn’t match that of a smartphone, and the other is that by focusing solely on the touchscreen the game misses out on some of the best features of the Vita.

Another interesting thing? You can play the game without sound and not miss out on anything. Because the cues are all visual and the rhythms are simplistic, you just follow the same pattern again and again. Add to this the occasionally distracting background music, ease of failure (especially coupled with sub-par touch controls), and relatively long delay jumping back into the action when you do fail, and I found myself quickly tiring of the game.

While I accept shallow plots for rhythm games, in Jungle Rumble I found pretty much everything fairly shallow. There is little replayability other than getting better medals, which for me wasn’t enough. 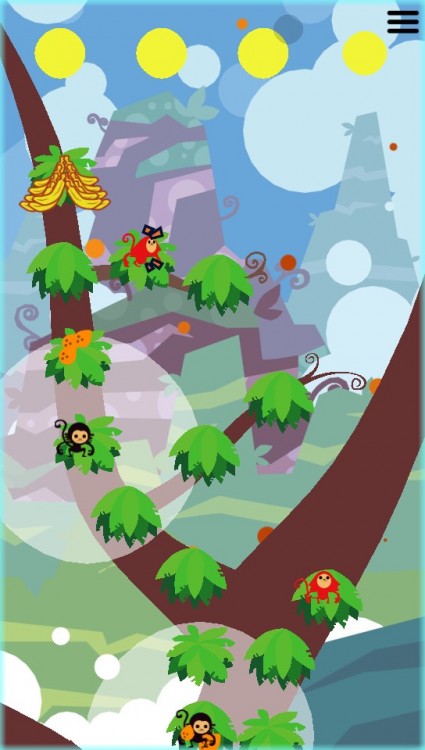 Mike S. says: The great art design is colorful and distinct, which improves player performance. Possible moves will be highlighted on-screen so you will never be lost as to your next move, but remember, your score is largely based on time, so use strategy, good timing, and think smart. This is one of those titles you will truly get good at once you finally, “become one” with the experience.

Disco Pixel’s Jungle Rumble gets a solid recommendation with fun visuals, catchy sound rhythms, and unique challenges amid enjoyable levels. The visual styles match the strong music as the game rewards hard-working players and galvanize these memorable musical stages in your head. An easy pick-up-and-play title without a deep storyline or characters, though the character scenarios are very memorable.

Mike A. says: I agree that the art design is excellent, and also that the puzzles are well done and thought out … but for me that isn’t enough. Jungle Rumble comes across as a very average smartphone-to-Vita port that would have been better left on the phone.